“I’ve actually been only having dreams of half-lit indoor spaces lately,” muses painter Lucas Arruda, working from a spacious light-filled studio in Sāo Paulo populated by his intimate scale paintings on its walls and paint tubes lined up in harmonious disarray. “I don’t see myself as separate from nature, either when facing it out in the open or when inside the studio—I understand nature more like the flow of time and of life.”

The 36-year-old is among Brazil’s globally sought-after fresh generation of artists, proven by his entry to esteemed institutional collections such as Fondation Beyeler and J. Paul Getty Museum, as well as recent knockout one-person shows at his native’s staple gallery Mendes WoodDM and global powerhouse David Zwirner’s London outpost. In fact, Arruda is on the eve of his New York solo, “Deserto-Modelo,” at the blue chip gallery’s Chelsea headquarters, where he will exhibit his hazy and intricately-orchestrated paintings as one of the youngest names in the gallery’s intergenerational roster that includes doyens Josef Albers, On Kawara and Yayoi Kusama, as well as hip market darlings Oscar Murillo and Jordan Wolfson.

An avid composer of abstraction with faint earthly accents as well as landscapes painted from memory, Arruda works in a modest scale. His abstract paintings possess precise color palettes in variant tints of a single color, subtly echoing wavy seas or hilly lands coated with a masterful rendition of light. His landscapes of tangled jungles or seascapes are plucked from his mind’s eye. “Over the years, repetition and process of painting itself have brought me a manner of working, and this is an ongoing process,” explains the painter to Observer about the concert between his gestures and the canvas. “In the landscapes, the wrist gestures are more prominent than in the monochromes, where the scale is bigger.”

SEE ALSO: Artist Nikhil Chopra on the Challenge of Living in the Met Museum for 9 Days

For Arruda, his landscape paintings are like portals that crack open white walls to uncharted territories that defy familiarity. While recognizable to the eye, he clarifies that these are divorced from a specific geography or culture and are “part of the environment at large…archetypal [landscapes] in formation, or dissipation.” So too with his abstractions—viewers can be forgiven for thinking the paintings’ romantic washes of paint depict flora, or that his delicate focal points in blue are nocturnal horizons. Any associations with nature the artist links to the “observers’ own historical references and experiences.”

Coinciding with tumultuous times when political and natural turmoils pressure Brazil into sweeping uncertainty, Arruda’s paintings manifest an escapist desire for abstraction, and reflection, in the face of chaos. The right-wing president Bolsonaro’s crackdown on freedom of speech and massive Amazon fires have rather overshadowed the country’s blossoming art scene, which has recently been kindled by a surging global interest in mid-century Neo-Concrete artists and emerging talents, including Arruda. The consensus is currently divided between those who believe in the potential for creativity during adverse times and pessimists who doubt the viability of a thriving arts community. “If you consider that contemporary visual norms are being dictated by a fast-changing world with instant demands, as a matter of fact, my work does not illustrate any of that,” ruminates Arruda, yet assures that he is “inevitably influenced by it as much as anyone else.”

But perhaps that’s his appeal. Arruda’s placid compositions and independence from signifiers of time and place emancipate onlookers from the precariousness of reality and offer simply the delight of painterly experimentation. An Arruda painting immerses viewers into a swell of sensory tenderness, whether beckoning their eyes with a tree-laden jungle or an exercise on silvery shades of green. Ahead of a lofty Chelsea debut, the artist is still thrilled by the potential that paint yields on canvas as much as he lets chance guide his brushstrokes: “Preparing a pink that I appreciate and identify with in my color palette, I start out by applying it onto a large area in the canvas. Then, I place more layers and add or remove paint until I find what form and spot this pink will occupy—what is left of the pink could be anything from a thin line to an entire sky.”

“Lucas Arruda: Deserto-Modelo” opens at David Zwirner on September 12 and remains on view through October 26, 2019. 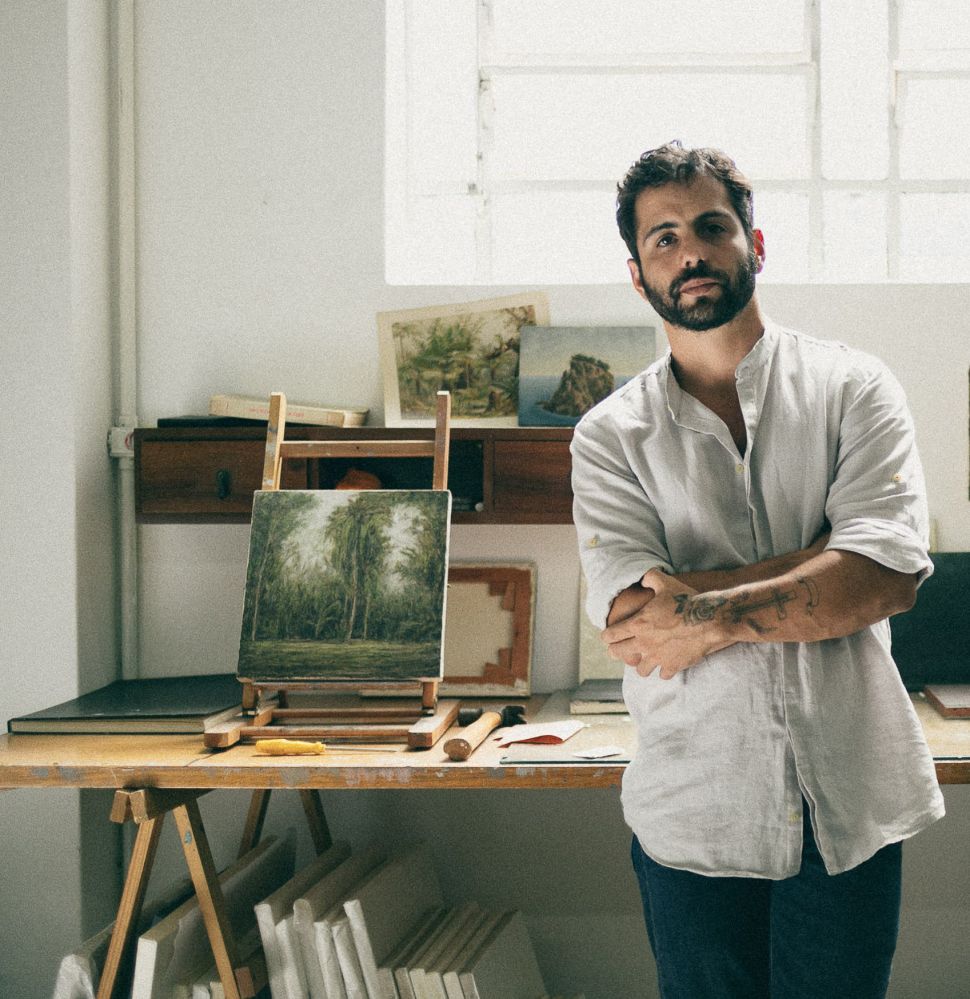