The lurid theatrical form called melodrama is often packed with precipitous plot twists and sensational revelations. But even the Met’s solid revivals of two prime examples of this lurid genre, Massenet’s Manon and Verdi’s Macbeth, felt a little pallid next to the company’s offstage soap opera.

I’m talking, of course, about the abrupt departure of tenor Plácido Domingo from the company after half a century in the wake of allegations of sexual harassment. His request to “withdraw” appeared late Tuesday afternoon, barely 24 hours before his scheduled first Met appearance of the season in the Verdi opera.

SEE ALSO: ‘Porgy and Bess’ Misses Its Protagonist on Opening Night at the Met

Not that anyone much could concentrate on the performance on Tuesday, but that was the season premiere of Manon, which in the context of the Domingo scandal took on a new resonance: not so much a fable of the rise and fall of a courtesan but a cautionary tale of imbalance of power between the sexes.

Or at least that is how the Laurent Pelly production, updated from the 18th century to circa 1900, comes across. The Gigi-like Manon is intermittently stalked by a phalanx of identically dressed men, an obvious but effective symbol of the patriarchy.

My objection to this take, as seen in previous seasons, is that it tends to obscure the central dramatic theme of the piece, the morbid romantic fascination of the naïve Des Grieux for the tantalizing heroine. But that wasn’t a problem on Tuesday night because of the compelling performance of tenor Michael Fabiano.

He is in no way the traditional delicate, poetic Des Grieux; rather, he is a volcano of raging hormones, and his love lurches disturbingly into obsession. When Manon seduces the young man away from his vocation in the Catholic church, Fabiano’s convulsive body language registers not mere desire but rather violent addiction.

His huge, dark voice is not always under ideal control: though he brought a courtly head voice to the early “Dream” aria, the later, high-lying “Ah! fuyez, douce image” threatened to bolt. No it’s not precisely textbook singing; but, on the other hand, when was the last time a textbook gave you gooseflesh?

Next to Fabiano, Lisette Oropesa in the title role seemed a trifle wan. The soprano boasts a winsome stage presence, a handsome and precise light soprano and elegant French diction. But, from my point of view at least, her sterling virtues did not add up to the sort of woman for whom a man would ruin his life. (Film diva Joan Crawford once said, à propos of glamour, “If you want to see the girl next door, go next door.” I can’t help thinking that when you arrived next door, you’d find Ms. Oropesa baking vegan snickerdoodles.)

The soprano who inaugurated this Manon production back in 2012 (with more than enough sizzle to define “man-trap”) showed up on Wednesday to slither her way through Lady Macbeth in Verdi’s opera. Anna Netrebko, in slightly cloudy voice, flung herself into the taxing music, achieving unearthly beauty in effortlessly floated high notes and aggressively dark low tones. Her dramatic approach, bizarre but spellbinding, presented the scheming Lady as a kind of histrionic sociopath, not so much interested in power as in edgy, borderline camp roleplaying.

Like Fabiano in Manon, she performed a kind of incandescent monodrama with the rest of the cast sort of wandering around in her penumbra. Zeljko Lucic, jumping in for Domingo without a stage rehearsal, created a battle-weary, apathetic Macbeth, not really letting his stout baritone out until the second half.

In what seems an eternal problem at the Met, the conducting for these revivals was safe and routine. Marco Armiliato deserves kudos for keeping Macbeth together under such ragtag circumstances, but there is no excuse for Maurizio Benini’s lumbering Manon. 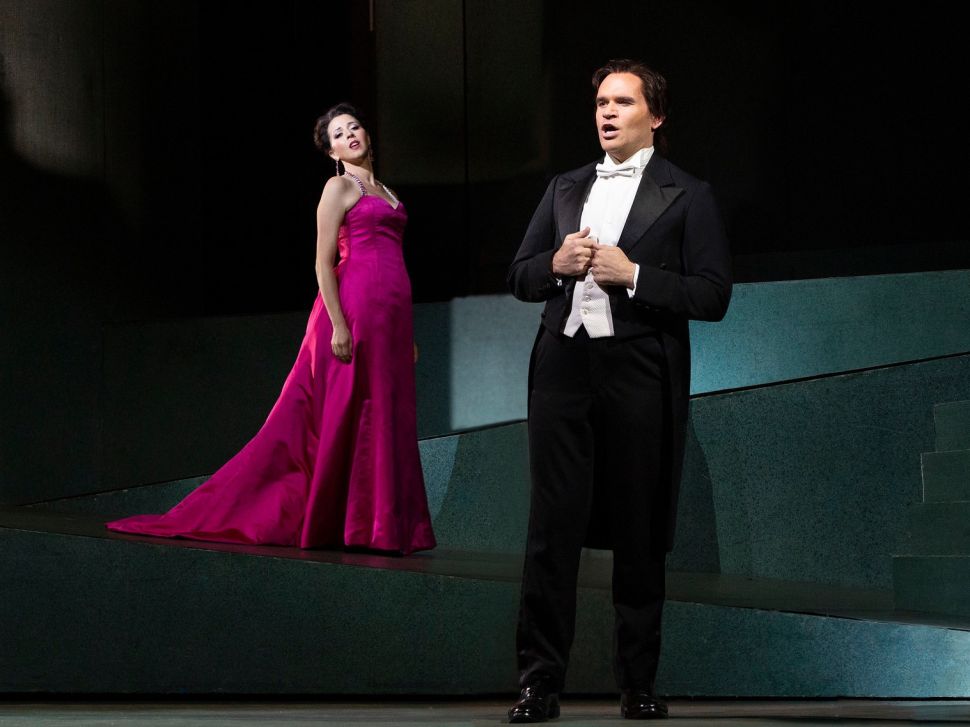