Fifty years ago, humanity achieved one of its greatest accomplishments: landing on the moon. But before NASA’s astronauts stepped on the lunar surface, they had to travel through space in rickety metal cans. Space travelers of the future, however, may instead cruise in cushy inflatable pads.

Decades later, NASA is in a race against itself to send humans back to the surface of the moon by 2024. To meet this ambitious goal, the space agency plans to build what it calls a Lunar Gateway—basically a mini space station in lunar orbit. This critical piece of hardware is essential to the agency’s plans and will serve as a transportation depot; astronauts will board a lander that will descend from there to the moon’s surface and return to the Gateway when the astronauts are ready to come home.

SEE ALSO: Rocket Insurance Is a Complicated Branch of the Space Industry

It would be comprised of two parts: a docking port where astronauts can transfer from their spacecraft to a lander, and a power module to keep everything running. Since it will be bare bones architecture, NASA is counting on commercial partners to build the other necessary components, like landers and habitat modules.

The agency plans to attach those astronaut quarters to the floating station, providing a place where astronauts can work, relax, eat and sleep. To that end, NASA is holding a competition—dubbed the Next Space Technologies for Exploration Partnerships (NextSTEP) program—to see which of its commercial partners can build the best habitat.

One such company, Bigelow Aerospace, is taking a slightly different approach to its space abodes. Based in Las Vegas, Nevada, the company thinks expandable habitat modules are the way to go. In contrast to the rigid habs of the past, Bigelow’s modules would launch in the cargo hold of a rocket, and then expand to full size once on orbit.

Bigelow’s flagship module—the B330—is essentially a giant, industrial-strength bouncy house in space. Designed to hitch a ride into space compacted, once it’s free of Earth’s atmosphere, the B330 will expand outward, creating a cushy crib for visiting astronauts.

The module’s expandable nature is its chief selling point; constructed out of a durable kevlar material, this type of habitat offers many advantages over the bulky, metallic modules carried up by the space shuttle. Not only is it cheaper to launch, but since it’s bigger on the inside than previous designs, it’s basically the TARDIS of space habs. For launch, the B330 will be compressed enough to fit inside a 16.5-foot-wide (5 meter) payload fairing; after it reaches space, the module will be inflated using its onboard gas canisters.

According to company representatives, this feature enables B330 to provide more habitable volume than traditional aluminum modules. For comparison, the module boasts 330 cubic meters (11,650 cubic feet) of internal volume, while the International Space Station contains about 930 cubic meters (32,840 cubic feet).

Designed to be an independent space station, B330 will have its own life-support and propulsion systems, capable of supporting a crew of four indefinitely and could work just about anywhere—in orbit or in deep space.

The B330 is the follow-up to the company’s initial prototype, dubbed the Bigelow Expandable Activity Module (AKA the BEAM), which was installed on the space station in 2015. The demonstration proved that the materials used to build the BEAM could withstand the harsh environment of outer space. Bigelow hopes that NASA will ultimately select the B330 for use on the upcoming Lunar Gateway. NASA plans to begin construction on the Gateway as soon as 2022 as part of its Artemis program, which aims to put astronauts on the moon by 2024 and establish a sustainable, long-term presence on and around the moon by 2028.

NASA envisions this Gateway, and the proposed lunar exploration program it will support, to be a stepping stone to Mars. So the Lunar Gateway could be just the beginning for Bigelow and the B330. But before it can become the free-floating deep-space hab of the future, B330 needs to pass NASA’s tests.

The space agency is currently conducting a two-week-long ground test on the B330 habitat at the company’s Las Vegas headquarters. Several NASA astronauts are participating in the testing to give input and assess the module. After all, who better to review a space habitat than someone who has actually been to space?

The B330’s cavernous interior provides space for workstations, cooking areas, 3D printers, plant growth facilities and more that needs to be in a fixed location. It also features multiple hand and foot rails, which are necessary features used by astronauts to get around sans gravity. But all of that needs to be laid out just so. Here’s where the astronauts come in: They’ve been giving feedback on various things like hand and foothold placement and how the interior flows.

If things go well for Bigelow, and NASA green-lights the habitat, company officials say that a B330 could be ready to ship in as little as 42 months.

But the versatile hab is capable of more than the Gateway; it can go anywhere, including the lunar surface and Mars, as well as free-floating in deep space. Two B330s could also connect, forming a spacious Martian transport system. But testing it in lunar orbit is the crucial first step toward any deep space ambitions.

The habitat could also stay close to home, thanks to a change in NASA policy. Earlier this year, the space agency announced it was opening up the International Space Station (ISS) for commercial use. According to the announcement, private companies will be able to send private citizens—AKA space tourists—on the trip of a lifetime as part of an initiative to help generate a sustainable economy in low-Earth orbit. The opportunities would begin in 2020 and will come with some strict guidelines.

Designed to help stimulate an economy in space, the new endeavor will also enable companies to develop and demonstrate technologies that will help NASA to achieve its goal of reaching the moon.

In addition to sending private citizens to the space station, the agency is also hoping that some companies may want to build their own modules that would attach to the station. Bigelow proposed attaching a B330 to the ISS, similar to what the company did with its BEAM module.

In June, Bigelow even announced that it had bought seats on four launches of SpaceX’s Crew Dragon capsule, a new vehicle that will soon be able to transport people to low-Earth orbit. The plans were to sell tickets to tourists for $52 million each; however, those plans have been put on indefinite hold.

That’s because sending tourists to the ISS is way more complicated than anyone realized—not to mention, it’s incredibly difficult to find people who can shell out more than $50 million for a short sojourn in space.

For now, though, the company is focusing on making it to lunar orbit. If Bigelow can snag that coveted contract, perhaps it can keep its dream of an even more massive deep space habitat alive. 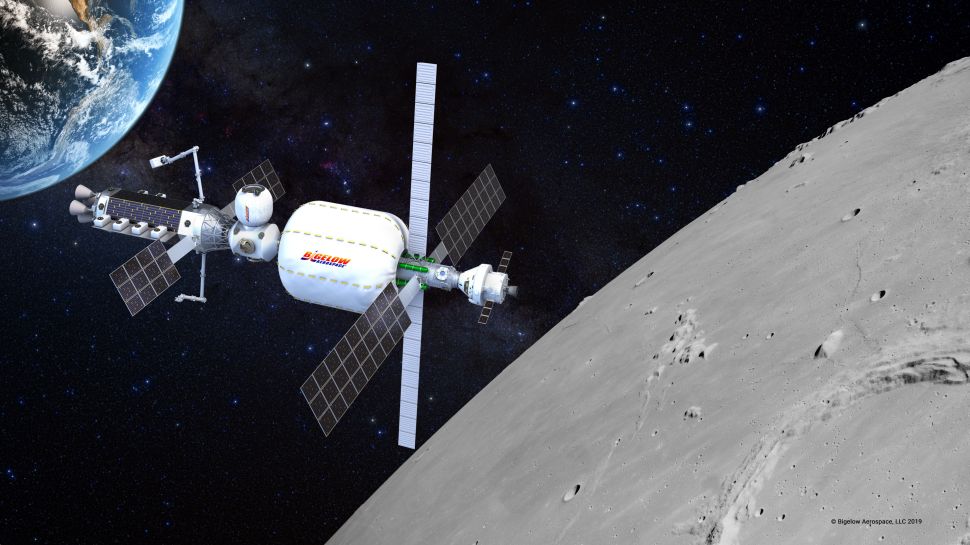