Performance artist Nikhil Chopra is no stranger to feeling the thrill of being watched by hundreds of pairs of eyes. He’s already spent time enthralling audiences by scrawling on the walls of MCA Chicago while wearing a loincloth in a critique of institutional colonialism—a theme that pervades much of his work. Beginning on Thursday, September 12, Chopra will begin an extended residency at the Metropolitan Museum of Art in New York City entitled Lands, Waters, and Skies. For nine days, Chopra will live inside the museum and make his way methodically through it on a pre-planned route, all the while working on a drawing that will then be displayed in the Robert Lehman Wing. Chopra spoke to Observer about the years of research he did to prepare for this performance, and about the challenges of making art at the center of a watching crowd.

Observer: I was wondering how you were processing the recent waves of protests against the Sackler family and their profit off of OxyContin, since I know you’re going to be spending a lot of time in the Sackler Wing of the Met. How do you synthesize things like that into your performance and your practice?
Nikhil Chopra: You know, one of the things that excites me so much about doing live performance is about the body being at the center of the practice but also the way in which the work unfolds. It becomes very important for me and my body to react to the environment that I’m in. In the past two years that I’ve been visiting the Metropolitan museum I’ve become acutely aware of the Western notion of collection and ownership of objects, how money and power works and how information is displayed.

And of course, during these visits over the past couple of years, with the involvement of the Sackler family and how that has played itself out politically, I think the Met has become very aware internally about how it deals with its collectors and collections. All of this has come up in the past two years while I’m doing research, so while I am, as an artist, not always excited about being didactic, I think it’s really important that the politics are approached through the poetics.

I think occupying a poetic space is a way for me to lure the audience into my story or into my critical understanding of my relationship with this museum. So for example, I’m singing a song written by a songwriter called William Trent, and William Trent is infamous for having distributed smallpox blankets to Native Americans. It’s a very sinister song about how you create power through creating fear and unrest, and in a way that’s an interesting metaphor for me to relate to something like what perhaps the Sackler family may have done in distributed these smallpox blankets amongst its own people essentially and annihilating a whole tribe of people. While these critical lenses that I’m applying to the work are not generally literal, they are poetic representations and reflections of the site that I’m occupying.

During your research period, what were some insights about the museum that you came to that you decided to focus on?
One of the observations of course is that coming to an encyclopedic museum of this nature is overwhelming. There are hundreds of thousands of objects and spaces to circumvent and look at and take inspiration from and reflect on. But I was really struck by the people moving through the museum. The enormous range of demographics of this museum are incredible, it’s sort of a microcosm of the planet in a way. I was attracted to how people moved through the museum, and what the favorite sites were and where the crowds went and where the crowds didn’t go. What were the parts of the museum that were hardly visited or scantily occupied? It was important that I addressed not just the sites, but also the way in which the museum was occupied. I’m interested in the performance not just being at the Temple of Dendur, which is the most favorite location at the museum, but also occupying the spine between two major departments. Occupying this kind of in-between space really lends itself to a kind of politics that I find myself in between, somewhere between being tribal and hyper-modernized.

The very quiet Lehman courtyard with the trickling fountain was a way for me to bring the whole performance to an end, especially because an incredible exhibition called “In Praise of Painting“ is right next to this courtyard. For me to be hanging my finale painting right next to Dutch masters from the 16th and the 17th century felt audacious but also felt correct to coexist with.

What kind of mental head space do you find yourself in when you’re actually in the act of doing a project like this?
Actually, I kind of think about it more like going on a trek, with my tent and my sleeping bag and my food supply. Climbing the mountain, going over the pass and descending, then the fatigue and the euphoria all play themselves out over these days. I don’t do any real preparation other than work the drawings, and really spending time in my studio making drawings over the past few months. I’ve also gone on a couple of treks since I’ve taken on this project to prepare myself, precisely because that sense of endurance is really addressed and I have to confront my body and its limitations. I do feel like I’m a traveler. 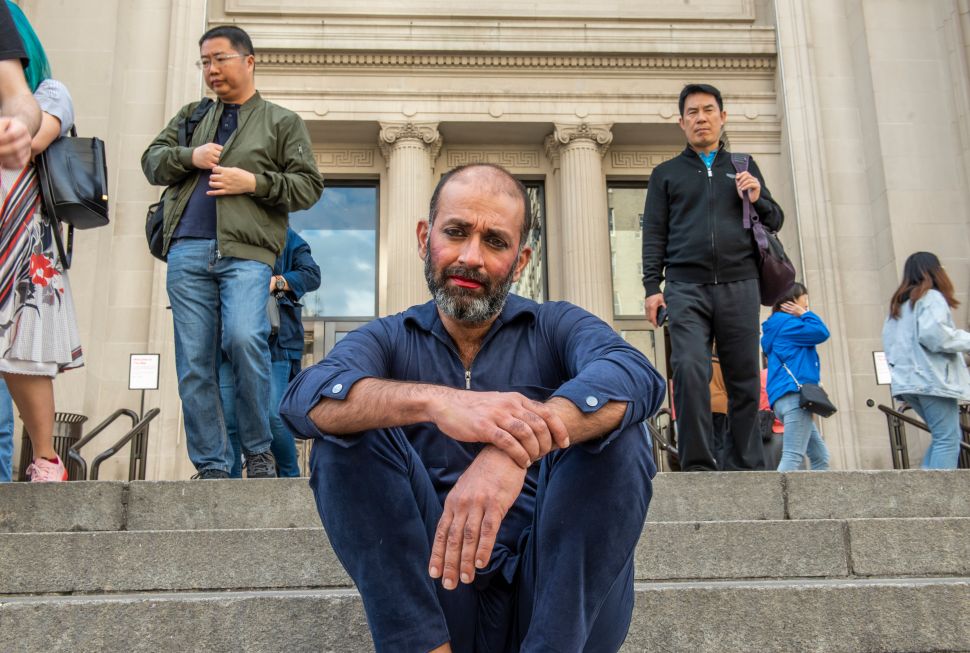