There’s almost as much to say about Pace’s new 75,000-square-foot space as there is about the shows in it. The massive construction project, marked by a glittering exterior veneer made of volcanic ash, cost a reported $18.2 million for the interior build out for a building the gallery doesn’t even own. Rather, they’re locked into a 20-year lease with Weinberg Properties that costs them $704,00 a month in rent (about $8.45 million per year and $169 million over the lease’s life time). This, for a property built on a known flood zone.

But, they get a museum out of it, which seems to be the goal. “The idea is that art is for everybody,” Pace CEO Marc Glimcher said, not just “intellectuals.” He was speaking of the desire to create a more inclusive organization. That sounds a lot like non-profit speak, which obsesses over inclusivity and serving the public, but without any of the responsibility that comes with it. What happens when profit-motivated galleries compete with museums for the role of cultural custodian? The answers aren’t known yet, but if the results in other sectors are any indication we should expect trouble. Many private businesses originally designed to supplement financially starved public services and infrastructure are now eroding those same public services—schools and tech buses being the most notable. So why would museums be any different?

SEE ALSO: A Biennial, Fair and Museum Open in Istanbul, Reviving Hope in an Art Scene Grappling With Issues

I visited Pace on Saturday, its first day open to the public, to see what I could glean. What defines Glimcher’s “everyone?” The answer so far: young financial bros, excited old women with plastic surgery, financially motivated collectors and High Line tourists. In other words, the same audience an art world insider would expect to see at Pace, but about 20 times more of them. The gallery was packed.

It’s probably too soon to tell the exact impact Pace will have on the museum world, but I can tell you that the experience isn’t quite museological. Rather, it feels oddly akin to visiting an upscale department store with elevators instead of escalators. Floors often have designated specialities or sections—the Library, Oceanic, Pace Live—and the reception desk replaces what would normally be a checkout counter. Like most department stores, the amount of retail space is dwarfed by the real estate designated to support it.

On the first floor, an impressive exhibition assembled with the help of the Calder Foundation showcases approximately 70 pieces from the 1920s to the 1930s in an effort to elucidate the way he “actualized the potential of energy.” Basically, if there’s even a suggestion of movement in the piece, it’s in this show.

As a historical look at the thought process that led Calder to his best known work, his mobiles, this focus makes sense. There were times, though, when I wondered if a museum would make the mistakes of a commercial gallery. It’s hard to know what’s been included and why when Pace doesn’t offer a checklist identifying the works for sale, but whatever connection the cut out animal sketches had to the curatorial thesis, I wasn’t identifying it. Apologies to the cat lovers out there, but I don’t see much potential energy in a lounging cat. That said, that work led to Gold Fish Bowl, a two-dimensional fish tank made out of wire, which succeeds in creating the impression of actively swimming fish. It comes with a crank driven mechanism to animate them (not visible in the display).

The most exciting sculptures come later, in the ’30s. Rooms filled with geometric and later, biomorphic mobiles fill the space. Two Spheres Within a Sphere, a hanging black disc and a red ball, stands out for its spare but perfectly balanced arrangement. There are dozens of works just as pleasing on view.

It’s hard to have too much to say about many of the other shows, though. Pace’s more than 10,000-volume library overwhelms the more delicate patterned drawings of Yto Barrada, unfortunately placed adjacent to the shelves. Loie Hollowell’s abstract paintings of blobs have vibrant color going for them and that’s about it. An intimate collection of uncanny Peter Hujar portraits and self-portraits left me wanting more. A tiny David Hockney show of drawings depicting his house from different directions left me wanting less. Pace has yet to populate their sixth floor roof terrace with sculptures at all.

On the seventh floor skyroom, though, three monumental chandeliers by Fred Wilson alluding to beauty, blackness, and death struck me as prophetic. Their muscular armature exudes strength, as if ready for any challenge. Yet, their fragile materials suggest a far from certain future. Set against a northern view of the city amidst the old Chelsea warehouses and the tall glass high rises of Hudson Yards looming overhead, the only certainty I saw was the unfathomable scale of coming change. 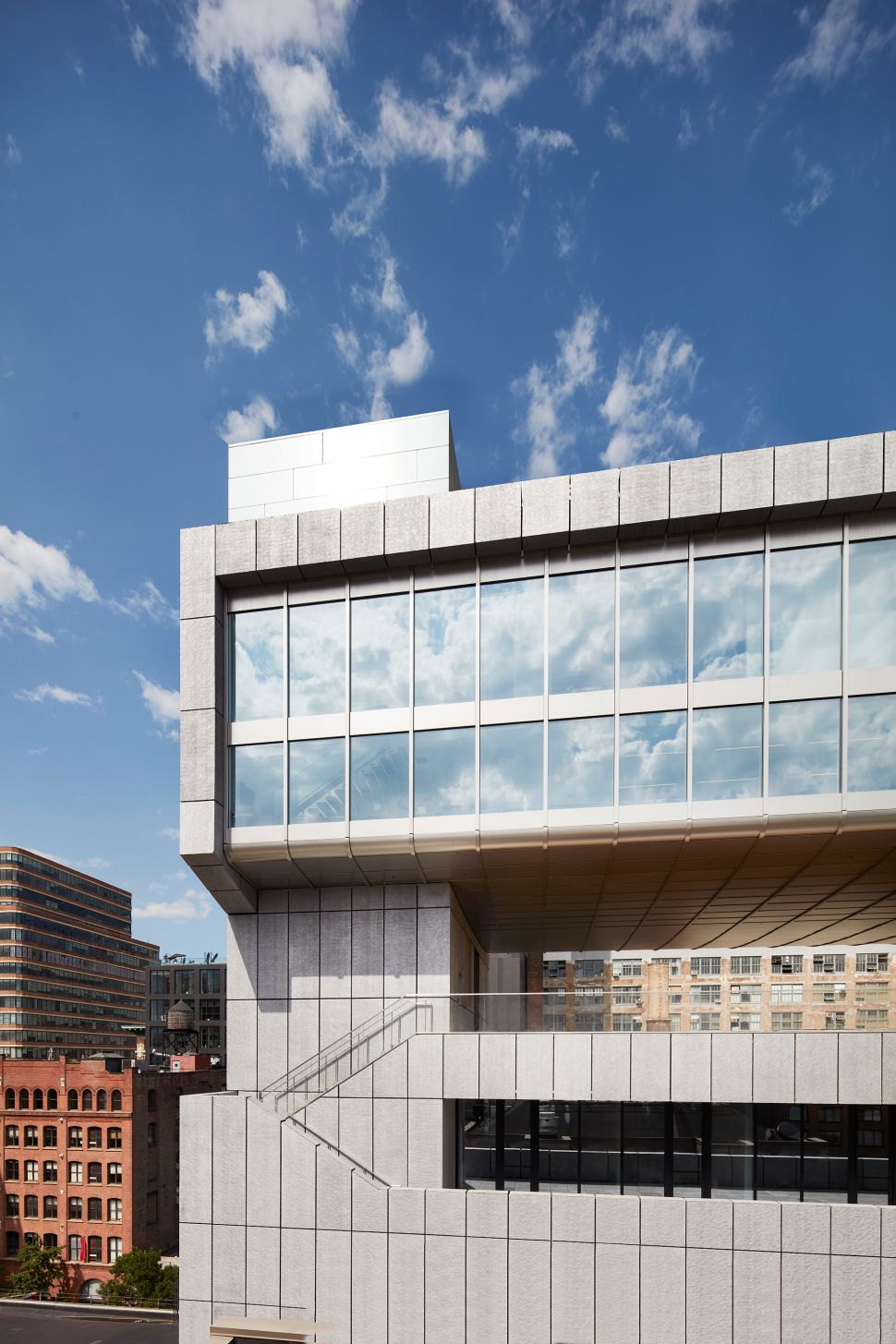