Over the summer, during a time when most galleries and museums lie in wait for the frenetic fall season in relative peace and tranquility, the Philadelphia Museum of Art has been working overtime to unveil its revolutionary expansion and renovation. The overhaul, overseen by star architect Frank Gehry, was the product of years of research and planning as part of the museum’s Core Project within a two-decade-long master plan, as well as the culmination of a $525 million fundraising campaign. The Museum of Art’s Core Project is a comprehensive shift for the institution, involving a massive interior expansion and the addition of much more gallery space. On Wednesday, a group of Philadelphia citizens got to experience one aspect of the renovation: the museum’s apparently spectacular brand-new entrance.

When the beautiful, Pantheon-like building was first opened almost a century ago, the humble entrance in question allowed visitors easier access to parking. Decades later, the entrance and hallway was used as a loading dock for all manner of museum-related goods and ephemera (and of course, this was around the same time that a little movie called Rocky drew everyone’s attention to the museum’s iconic front steps). Now, the public can finally walk through what has long been inaccessible to them: according to the Philadelphia Inquirer, the vaulted hallway made of Kasota limestone has been restored and linked to a new, dramatic glass entrance for all to enjoy.

“I feel honored to be able to do it,” Gehry told WHYY Philadelphia of his work with the museum. “I can’t imagine there’s anything like this, where something that was designed 100 years ago still has creds, and vibrates, and makes sense today for a collection of contemporary art.” Certain elements of the huge construction project, including a planned auditorium, have yet to be completed, but the museum projects that all the work will be finished by fall 2020. In the interim, the museum has a number of fascinating exhibitions currently on display, including a survey called “Photography and Memory,” which highlights “significant monuments, memorials, and landscapes,” much like the institution in and of itself. 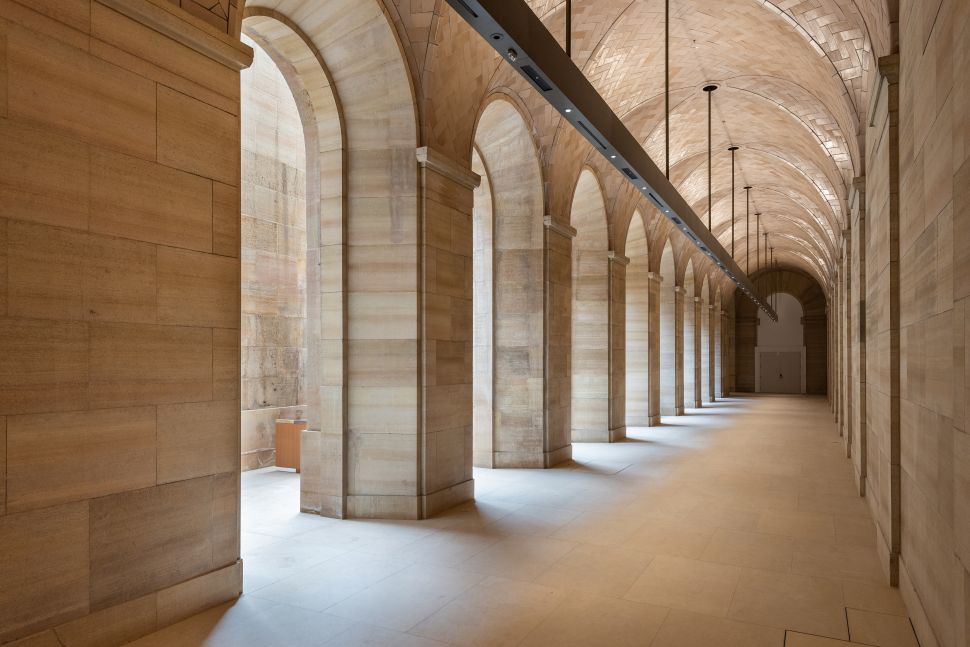