As New York’s museums and galleries gear up for their fall and winter rosters, there’s a seasonal sense of anticipation that accompanies all these interlocking proceedings. You never know who or what will emerge from the flurry of offerings to produce something truly essential, and it’s clear that the Whitney Museum of American art, MoMA and the Public Art Fund are confident that “Instigation, Aspiration and Perspiration,” their collective exhibition with the interventionist performance artist Pope.L, will prove to be a deeply thoughtful project. Born in Newark, NJ, Pope.L has spent decades making art that interrogates what cities can produce and who metropolitan areas can disempower. On Saturday, the artist will embark on what’s perhaps his most ambitious project yet: a crawling relay race of sorts through lower Manhattan entitled Conquest.

Over a span of approximately five hours this weekend, 140 volunteers will gradually make their way from Seravalli Playground in the West Village towards Greenwich Avenue, where they’ll pass the AIDS Memorial Park on their way to Washington Square Park. There, the crawlers will hang a left up University Place until they finally conclude their journey in Union Square.

At a preliminary press breakfast on Wednesday, the artist was illustrative when discussing his motivations behind the work, the first of which occurred in Times Square in 1978, followed by years of enacting the performance across the city.  Pope.L explained, “I mean, those of you who remember New York in the ’70s, New York was having a really tough time, fiscally. There were tons more people visibly on the street, and my image was that all these people were not pieces of shit. They had families, they had histories. What if all these people en masse began to move as one? That was my image. But at the time I could only convince one person to do it, and that was myself, so you do what you have to do, right? I figured if I crawl long enough I’ll get company, and that’s where we are now.”

Indeed, Pope.L has launched many increasingly ambitious collective crawling projects throughout the course of his career, in addition to his more individualistic performances like ATM Piece, 1996, and Thunderbird Immolation a.k.a. Meditation Square Piece, 1978, that will be the focal point of the MoMA’s upcoming October exhibition “member: Pope.L, 1978-2001.” Meanwhile, over at the Whitney, Pope.L and the institution have created a massive new installation called Choir, which is meant to evoke an inverted drinking fountain; an appliance that was integral to Jim Crow segregation. The piece’s title is in reference to the recorded songs and voices that will filter through the noise of gushing , and Pope.L created it in the wake of his recent project Flint , 2017. 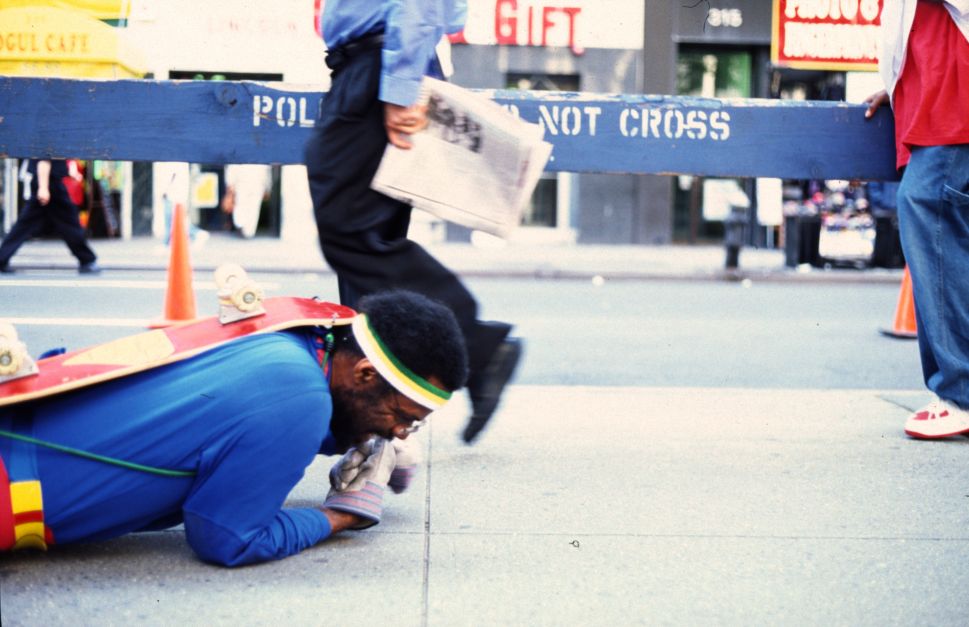