A bold banner facing Lincoln Center confronted the audience at the opening night of the Metropolitan Opera yesterday evening, depicting the leading male character of the Gershwins’ Porgy and Bess as sort of superhero.

On Kerry James Marshall’s graphic novel-style poster, an empowered Porgy strides down a street with an ecstatic Bess riding on his shoulders. Ironically, in the performance proper, bass Eric Owens as Porgy—and, for that matter, the whole production—was carried by the evening’s Bess, the bewitching soprano Angel Blue.

It’s impossible to decide which aspect of Blue’s performance was the most enchanting: her radiant voice with its seemingly effortless (and endless) top notes; her joyous stage presence; or her nuanced take on the contradictory character of Bess as party girl, faithful sweetheart and substance/sex addict.

On paper (even with the benefit of George Gershwin’s rapturous music) Bess shouldn’t make sense: her character is told through less of an arc and more of a collection of unrelated roller-coaster swoops. But the soprano’s sincerity and commitment bound everything together—so much so, in fact, that after the character relapses on “happy dust” and runs off to New York City, the rest of the opera felt anticlimactic.

Even more miraculous was her working all this magic with so little support from the nominal star of the piece, Owens. Porgy and his unconditional love really ought to form the emotional center of this show (he’s Butterfly to Bess’s Pinkerton, as it were), but his flinty bass-baritone and grim acting distanced him both from the audience and from the onstage community of Catfish Row.

Among that community, though, a number of excellent individual performances shone. Soprano Latonia Moore very nearly stole the show from Blue with Serena’s two show-stopping numbers; the cheers and applause after her wrenching “My Man’s Gone Now” were the kind of fanatical ovation a coloratura might dream of after the Mad Scene in “Lucia di Lammermoor.” And another soprano, Leah Hawkins, who graced the stage for only a couple of minutes as the Strawberry Woman, won thundering applause as her long-held high pianissimo trailed away.

As the nefarious pimp and drug peddler Sportin’ Life, Frederick Ballentine played the role to the hilt, but that was, I think, a miscalculation. He created a performative, presentational character in the context of what was generally a realistic production. Also, for my taste, “It Ain’t Necessarily So” is a strong enough number that it doesn’t need to be swung so far out of shape as the tenor did on opening night.

Far more compelling was Alfred Walker as Bess’ gangster lover, Crown, his granite bass-baritone and stocky presence radiating menace. So strong was his performance that I kept wondering why he—or any of several other excellent low-voiced singers in the cast—wasn’t taking Owens’s place in the title role.

The great success of James Robinson’s production is creating a sense of the community of Catfish Row, with singers and dancers busy and attentive on multiple levels of Michael Yeargan’s intricate unit set. Less effective were a number of scenes partially obscured by that setting’s maze of pilings and screen door.

Sadly, the weakest link through most of the night was the musical aspect, from the hacked-up version of the score to David Robertson’s pedantic conducting. Most of the show seemed to crawl in slow motion until the transcendent final scene where Porgy and the chorus sing “Oh Lawd, I’m On My Way.” Here Robertson suddenly pushed the pedal to the metal and the hapless Owens vanished before we could grasp the magnificent folly of this quest to find Bess.

Then again, what quest could be called folly with the magnificent Angel Blue as the goal? 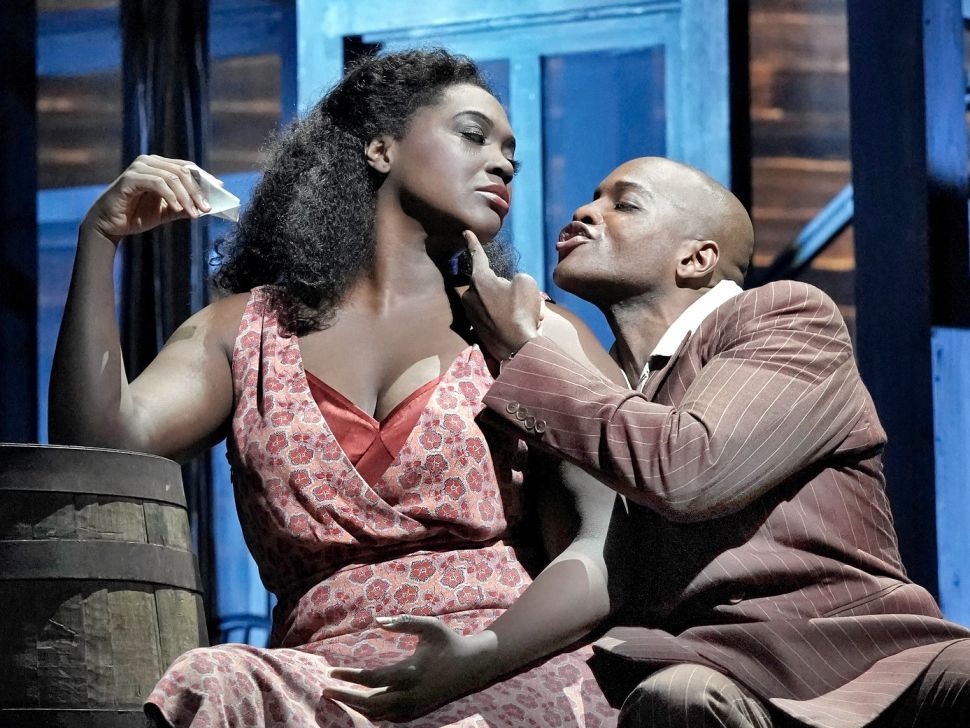