The new Apple Watch Series 5 is here and has brought with it an array of dedicated health apps.

One of Apple’s new software launch partners is vitamin subscription service Ritual, known for their multivitamin for women. The startup is one of the handful of brands to be releasing a standalone watchOS 6 app, in time for the the new watch’s debut.

SEE ALSO: Apple Hasn’t Given Up on Self-Driving Cars Just Yet

According to Ritual, the app was designed as result of recent consumer demand, which the company says will act as a way to help establish the habit of taking supplement dosages regularly.

“We designed the Ritual watch app to reflect the needs of our customers,” Ritual’s head of engineering, Daniel Archer, told Observer. “As a D2C (direct-to-consumer) company, we hear direct feedback all the time and wanted to create something that would be useful as [customers] strengthen their vitamin habit.”

The app will also be integrated into Apple Health, so that users can track their daily intake of nutrients like vitamin D and omega-3, along with physical activity.

The design revolves around Ritual’s “Habit Loop,” which is a three-part cycle that, “with enough time and repetition, enables the brain to put a certain behavior on autopilot—effectively turning it into a habit.”

The Habit Loop’s three steps are: “Cue,” a daily dosage reminder; “Routine,” a marker that the user took their vitamins; and finally a “Reward.” This last step, according to the company, is what the user’s brain associates with the moment’s celebration once they’ve taken their vitamins. Because dietary supplements are known to be most effective when taken regularly, the Habit Loop could make for a vital component of Ritual’s service.

“The things you do every day have the biggest impact on your long-term health,” Ritual founder Katerina Schneider told Observer. She went on to explain that offering Apple Watch users, who make up a majority of health wearable users, the app’s tools gives them an efficient way to track their vitamin habits. “Whether they are a Ritual customer or not, they also become part of a larger community of people who share similar goals.”

Archer also explained that the app’s design took into consideration both potential new Ritual customers, as well as “vitamin veterans.”

“For those just starting to make vitamins part of their daily ritual, the app’s daily reminders and prominent check-in button offer an easy avenue to start,” Archer said. “For those who already include vitamins as part of their routine, the app serves as a supportive, and even competitive, friend through streak tracking and global rankings help incentivize them to keep it up.”

The Ritual app is now available on the Apple Watch App Store. 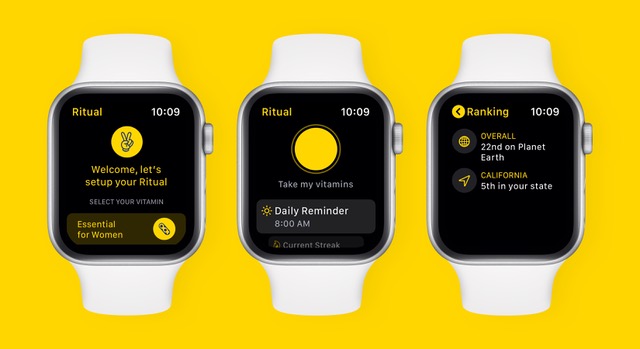