Like your local freeway, low-Earth orbit is becoming more congested each year. But unlike the highways on Earth, there aren’t many rules of the road in space, and with the number of active satellites set to increase exponentially in the coming years, experts are concerned about the risk of collisions.

On Monday, the European Space Agency (ESA) took action to prevent one such collision. The agency tweeted that it moved one of its satellites, an Earth-observing craft named Aeolus, aside in an effort to avoid a potential collision with a SpaceX Starlink satellite.

For the first time ever, ESA has performed a 'collision avoidance manoeuvre' to protect one of its satellites from colliding with a 'mega constellation'#SpaceTraffic pic.twitter.com/kmXvAgpj1U

Generally speaking, collision avoidance maneuvers are quite common—ESA conducted 28 of them last year—but typically, these events are caused when satellites cross paths with dead satellites or fragments from previous collisions.

However, in this case, the Aeolus satellite was on a potential collision course with an active satellite: one owned by SpaceX.

“For the first time ever, ESA has performed a ‘collision avoidance maneuver’ to protect one of its satellites from colliding with a ‘mega constellation,'” the ESA said on Twitter. The so-called mega constellation ESA referred to is none other than SpaceX’s Starlink system, which aims to provide global internet coverage.

The California-based aerospace company is planning to launch a small armada of communications satellites—up to 12,000 strong—to orbit the globe, connecting the world below. So far, SpaceX has launched 60.

Aeolus launched in August 2018 to study the world’s winds, aiding weather forecasters around the world. It occupied this particular region of low-Earth orbit for nine months before Starlink arrived on scene. (SpaceX launched its first Starlink satellites in May of this year.)

According to subsequent tweets, Aeolus fired its thrusters to move away from the area, half an orbit before any potential collision may have occurred.

ESA says that action had to be taken because at the time of the maneuver, there was a 1-in-1,000 chance that the two satellites would collide—10 times higher than the 1-in-10,000 threshold dictated by safety regulations.

The agency said that it contacted SpaceX about the potential close encounter last Wednesday; according to ESA, the California-based rocket builder reportedly said they had no plans to move the satellite out of the way.

SpaceX explained in a statement that early estimates indicated the risk of collision to be much lower (about 1-in-50,000), so it didn’t deem any evasive actions necessary at that time, adding that it would have better coordinated with ESA to avoid a collision once the estimates got worse, but a bug in the satellite’s on-call paging-system prevented SpaceX from getting an update on the collision probability.

“SpaceX is still investigating the issue and will implement corrective actions,” a company spokesperson said in the statement. “However, had the Starlink operator seen the correspondence, we would have coordinated with ESA to determine best approach continuing with their maneuver or our performing a maneuver.”

The U.S. military currently monitors all space traffic and facilitates maneuvers such as this one. When they detect a potential collision, they notify both parties so the operators can figure out the best course of action. Regulations requires sending out notices when there is greater than a 1-in-10,000 chance of a collision. Those notices are sent via email.

“Today, this negotiation is done through exchanging emails—an archaic process that is no longer viable as increasing numbers of satellites in space mean more space traffic,” Holger Krag, the head of space safety at ESA, explained in a blog post on the agency’s website

But a lot of those notices can end up as junk mail.

“This example shows that in the absence of traffic rules and communication protocols, collision avoidance depends entirely on the pragmatism of the operators involved,” Krag added.

Krag made it clear that he does not blame SpaceX, but he said the incident highlights a need for better systems in the future in order to prevent collisions.

“No one was at fault here, but this example does show the urgent need for proper space traffic management, with clear communication protocols and more automation,” Krag explained in the same article. “This is how air traffic control has worked for many decades, and now space operators need to get together to define automated maneuver coordination.”

But the near-miss has raised concerns about the lack of regulations in space, especially the lack of direction in Earth’s congested lower orbit.

That’s because SpaceX isn’t the only company with dreams of launching mega-constellations; companies like OneWeb and Amazon also want their own fleet of internet-beaming satellites soaring above the globe. With more than 5,000 objects already orbiting Earth, space is filling up quickly.

As more satellites launch, operating in low-Earth orbit will require constant vigilance, as space debris experts try to understand the impact mega-constellations will have on the future of orbital traffic, especially if no rules are implemented.

Their argument is simple: as the number of potential collisions rapidly increases, the ability for people to manage these events will become more difficult. Eventually, the manual system used today won’t be able to keep up with the number of objects orbiting Earth.

That’s why ESA tweeted that it wants to start using AI technology to help prevent future collisions; SpaceX already announced its own autonomous collision avoidance system. For now though, all maneuvers are coordinated manually.

When the first satellites were launched, people never dreamt of the sheer amount of orbital traffic we have today. Anyone who sent up satellites operated under the notion that space is so vast, we could never possibly use it all up. Therefore, we didn’t need space traffic laws.

Like most things in life, we were wrong. As it turns out, orbital real estate is limited. This lack of regulation might have worked OK for the last few decades, but now, we need to re-think our policies and regulations.

Currently, the burden of monitoring all would-be collisions falls on the shoulders of the Department of Defense, in particular the Air Force’s 18th Space Control Squadron. In 2016, the Squadron sent satellite operators nearly four million collision avoidance notices. It’s important satellite operators receive those notices because if any satellites were to collide, the leftover bits could become space shrapnel, swirling around the planet and potentially harming other orbiters.

But these massive satellite swarms aren’t the only orbital hazard. Smaller, propulsion-less satellites can pose a threat as well.

The advent of the small sat established a new market and new way to access space. These tiny satellites can range in size from roughly a shoebox to that of a refrigerator and opened up space to companies, universities and research organizations that couldn’t afford traditional, bulky satellites. Some of them are so compact that they don’t even have onboard propulsion.

Earlier this year, on January 27, two such satellites—one from a company called Capella Space and one from Spire Global—were on a collision course. There was one major issue: Spire Global’s satellite had no traditional means of maneuvering itself out of the way.

In potential encounters like this one, it’s up to the other party to navigate around, and if neither satellite can change its course, then things get really complicated. Fortunately for both parties, Capella’s spacecraft fired its thrusters and moved out of the way. Collision avoided.

Spire operates roughly 60 satellites in low-Earth orbit and receives multiple messages from the Air Force each week about potential collisions. As does Iridium, a global satellite communications company that operates a fleet of 75 satellites currently on orbit. While ESA was concerned over the potential collision with SpaceX, not everyone in the industry was as anxious, including Iridium CEO Matt Desch.

According to Desch, his teams shuffles around satellites on average of once a week to avoid space traffic—a normal part of flying satellites.

“Ever since the Air Force started providing us actionable information in 2009, we’ve been moving satellites that are predicted to be too close to space debris sometime in the next day,” he told the Observer via email.

“It has averaged about 50 satellite observations a year over the last number of years,” he added.

Despite the initial fleet not being any larger than most satellite constellations already on orbit, the incident does raise some concerns—namely, if satellites are already having to navigate around Starlink satellites, what’s going to happen when there are thousands of them in orbit?

This particular Starlink satellite crossed paths with Aeolus after its orbit was lowered to test deorbiting techniques. Most of the initial satellites have raised their orbits to approximately 342 miles (550 kilometers) up; this Starlink was operating in a much lower orbit—around 198 miles (320 kilometers)—than is planned for the rest of the fleet.

SpaceX has also said it plans to use autonomous systems on board each satellite to dodge other objects. So it’s entirely possible that if ESA hadn’t acted, the Starlink satellite would’ve moved out of the way on its own. SpaceX CEO Elon Musk told reporters in May, before the first set of Starlinks launched, that much like the collision avoidance systems in cars, the satellites are able to autonomously detect and avoid other objects in space.

(Although it isn’t clear if the autonomous avoidance system was active on the Starlink satellite in question, SpaceX did confirm to Quartz that, so far, its Starlink fleet has performed 16 autonomous maneuvers but didn’t say when they happened.)

Satellite operations depend on cooperation to run smoothly. This means that all satellite operators need to act responsibly. According to Desch, if all operators actively monitor and do their part to avoid potential collisions, and promptly deorbit their satellites at the end of life, traffic in low-Earth orbit should continue to be manageable.

But even if we’re good stewards of space, one thing is clear: as the sheer number of satellites in orbit increases, so does the risk of collisions. While the Air Force tracks the likelihood of such incidents, it doesn’t actually have the authority to make operators move their satellites around to avoid a crash.

The Commerce Department will then take that info, combine it with data from other agencies, private companies, and even other countries to better manage orbital traffic. Armed with this plethora of information, the department will soon be responsible for telling satellite operators when they’re on a collision course and what to do about it. 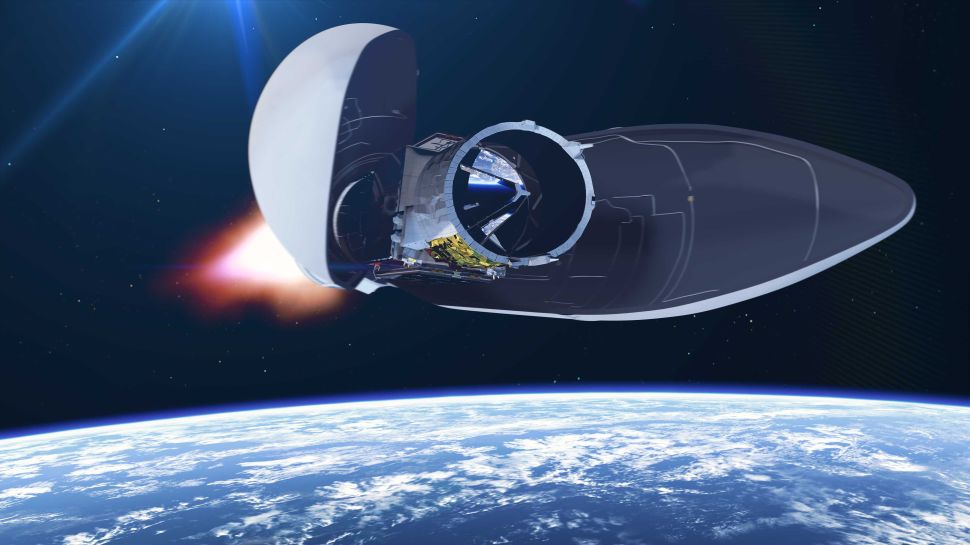