The new Broadway season is officially in motion, and so far unofficially underwhelming. The most promising new arrival, The Height of the Storm, is also the most disappointing. Another import from London, where mixed reviews included one pan denouncing “quirks and gimmicks that overwhelm narrative substance.” The result, in all honesty, is one bad play with two great actors working overtime to breathe life into a theatrical corpse that is dead on arrival.

The two great actors are Jonathan Pryce and Eileen Atkins. They deserve bigger medals of courage than the one bestowed on Bert Lahr by the Wizard of Oz. The author is French novelist-playwright Florian Zeller, whose previous work include plays called The Son, The Father and The Mother. The most recent of that trio staged in New York was The Mother, a ghastly off-Broadway mess that starred French film star Isabelle Huppert, working in English (a bad idea, to be sure). Zeller writes incomprehensibly minimalist plays that address our obsession with coherence and drive audiences to the exit doors mumbling “huh?”

SEE ALSO: ‘Beetlejuice’ Will Leave You With a Headache No Amount of Excedrin Can Cure

The curtain rises on a cluttered country house near Paris that belongs to an anointed but overrated writer named, simply, André—played by Pryce, who seems all too familiar in the role, having just played another overpraised writer, married to Glenn Close in the film The Wife. This time the wife is a wise and wizened matriarch named Madeleine, who is smarter than the husband, though not as famous—played by the mesmerizing Atkins.

When the play begins, someone has just died. It must be the wife, because the husband mourns her inconsolably, while the couple’s daughters insist that after 50 years of marriage the father cannot live alone, and annoy him incessantly by threatening to call a real estate agent to dispose of the house. But wait. They also talk to each other about posthumously publishing his diaries, papers and notes.

OK, so it’s the father who died, right? But sometimes the three of them babble ad infinitum about their dear, departed mother. But then the mother arrives too, carrying a bag of the father’s favorite mushrooms for dinner and delivering a recipe for how to sauté them properly. (Lots of fresh chives, you know.) Now the three women all talk about the father in the past tense, while the card accompanying the funeral flowers that nobody bothered to read turns out to be from the mother.

So was it the mother who died, or the father? Or maybe both? Although this twaddle is mercifully only 80 minutes long with no intermission, by the time it ends, you won’t give a hoot who died as long as you can flee with the speed of light, vowing to never eat another mushroom as long as you live.

If The Height of the Storm is enigmatic gibberish, the two stars work hard to give it some symmetry. Pryce is both bombastic and senile, while Atkins makes even her moments of quiet contemplation without dialogue throb with quiet vitality. She knows how to listen. Directed by Jonathan Kent, she spends most of her time onstage peeling mushrooms, while Pryce stares out of the kitchen window in stupefying silence.

Both of them are dignified, realistic, graceful and criminally wasted in a play that is totally incoherent. The author provides his own defense with the line: “People who try to understand things are morons.” I’m willing to bet that a lot of alleged morons who hope Broadway returns to normal soon will wisely avoid any play called The Height of the Storm that doesn’t even have a storm in it. 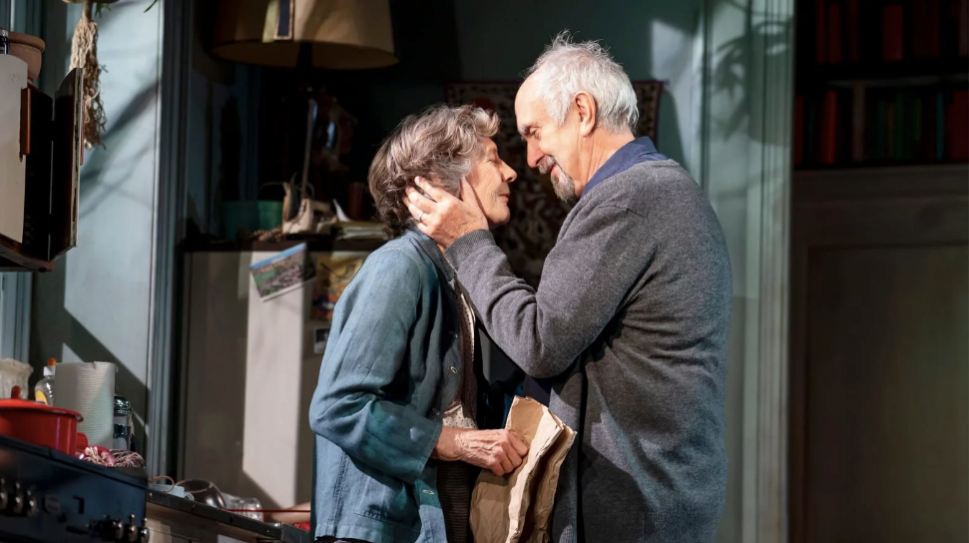