Welcome to Observer’s 2019 Fall Arts & Entertainment Preview, your complete guide to the best this season has to offer. We’ve combed through everything that’s happening in TV, movies, dance, opera, theater, the visual arts and literature to bring you our picks for what to pay attention to as the weather cools. Theatergoers should also check out our lists of unmissable opera and dance performances and must-read books.

As someone who reviews tons of NYC theater, I find the hardest question is also the simplest: What should I see? Well, OK…do you like musicals? What about new plays? Oh, you prefer classics? And how about experimental stuff—what’s your tolerance for the weird? All these boxes need to be checked if your friend or casual acquaintance is to be steered toward a solid night at the theater. So, in the spirit of catering to a spectrum of tastes, here are 10 of the dozens of shows opening this fall. There’s a notable cluster of pop stars (Tina Turner, Alanis Morissette, David Byrne), but also cult figures for freaky-theater connoisseurs (María Irene Fornés). Once you’ve winnowed it down (Off Broadway > Play > Foreign > Classic etc.) you will find your ideal showbiz niche.

Heroes of the Fourth Turning at Playwrights Horizons (September 13)

Will Arbery made a splash this past spring with his bizarrely compressed and possessed mini-epic of three Texas sisters, Plano. Now he turns his Western gaze to Wyoming, where a backyard gathering of young conservatives morphs into a battle for ideological coherence. Want to know what conservatives sound like with no liberals around? This is your show.

Wild Bore at Skirball Center for the Arts (September 27)

Most artists ignore reviews. A few read them and, if they’re negative, resent them for years. Performance artists Adrienne Truscott, Zoe Coombs Marr (from Australia) and Ursula Martinez (from the U.K.) go a step further. In this raucous dissection of critics and the dubious practice of criticism, the performers—naked from the waist down—recite from their most damning reviews.

It was Off Broadway’s hottest ticket last year; now Jeremy O. Harris’ button-pushing tragic farce about sex, race and self-liberation transfers uptown. So, what happens in this succès de scandale that Madonna snuck into and Tony Kushner gave a standing O? Let’s just say that interracial couples have to work through messy bedroom issues inextricably linked with America’s founding sin of white supremacism. See it, argue about it and brag afterward.

Singer-songwriter David Byrne, best known as the frontman of Talking Heads, is no stranger to theater. One of his concept albums, Here Lies Love, was adapted for the stage at the Public Theater. He also wrote a less successful musical about Joan of Arc. Now he melds his brainy, bopping tunes with the Great White Way in a high-concept concert. Byrne joins a squad of dancers and musicians clad in silver-gray uniforms and moving in synchronized patterns. “Utopia” means “nowhere,” but this is the place to be.

Anyone who has studied Shakespeare’s life and work will be intrigued by the title of Irish troupe Dead Centre’s show: It’s a reference to the Bard’s son, who died at age 11 and is assumed to have provided the title of his greatest tragedy. This is not a riff on Hamlet, though. Instead, an irreverent boy questions his artist-father, an absentee parent, who appears on video as a distant, ghostly presence.

The ’80s MTV comeback icon, incarnated by Angela Bassett in a classic biopic, now aims to conquer Broadway. This jukebox musical will, of course, showcase Turner’s greatest hits, such as “What’s Love Got to Do With It” and “Private Dancer.” Broadway powerhouse Adrienne Warren plays Tina, and the whole shebang is directed by Phyllida Lloyd, who had a modest success with Mamma Mia!

Theater lost one of its great originals when playwright María Irene Fornés passed away last October at the age of 88. She was a trailblazer in melting genre boundaries from the 1960s through the ’80s and beyond. Now’s the time for Fornés’ legend to expand, with a shiny revival of her 1977 all-female subversion of naturalism. Fefu explores fraught bonds among eight gal pals in New England, circa 1935.

Last time Irish film director John Carney teamed up with New York Theatre Workshop the collaboration produced an unexpected Broadway sensation with Once. We’ll see if lightning strikes twice with this new project based on Carney’s 2016 movie about a Dublin boy in the 1980s trying to win a girl by—how else?—forming a rock band. The excellent Rebecca Taichman (Indecent) directs this plucky new musical.

Many jukebox musicals focus on the personal lives of their creators (Beautiful, Jersey Boys). But this new one—scored to hard-rocking anthems by Alanis Morissette—does not delve explicitly into the Canada-born singer-songwriter’s struggles with depression or eating disorders. Instead, those issues crop up for the dysfunctional suburban family at its center. Hear “You Oughta Know” and other radio hits in a bracing, new context. 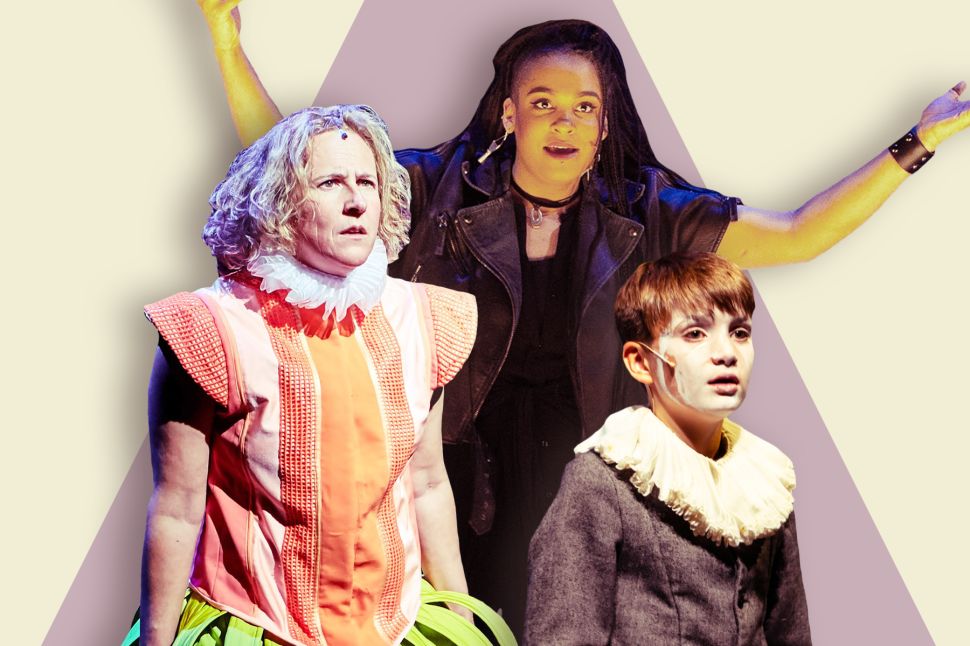