With short intermittent pauses to sort her thoughts, director Marielle Heller speaks at a measured pace. There’s a deliberateness to her delivery, a sense of surety that each word is placed in exactly the right order. There’s no rambling or extraneous sidetracks—just intelligent efficiency. Perhaps that’s how she’s managed to start her filmmaking career with three movies in just four years, a prolific output for which she’s quick to deflect praise.

Her 2015 debut, The Diary of a Teenage Girl, drew rave reviews and currently boasts a 94% on Rotten Tomatoes. Her second feature, last year’s Can You Ever Forgive Me?, earned three Academy Award nominations. Her third film, the Tom Hanks-led A Beautiful Day in the Neighborhood, is premiering this week at the Toronto International Film Festival (TIFF). It’s being positioned as Sony’s big Oscars contender heading into awards season.

SEE ALSO: Rian Johnson on Where ‘Knives Out’ Fits in Today’s Cinema

The story of a teenage girl’s journey of sexual discovery, the criminal forgeries of a down-on-her-luck author and the friendship between a journalist and a television host don’t appear to have much in common. But zooming in, the threads that link Heller’s three films become visible. The films revolve around normal every day people attempting to navigate the endless complexities of a world that has no remorse about being bigger than the individual people and stories that inhabit it.

“I love movies where the explosions and fireworks are happening inside someone’s heart and mind instead of outside,” Heller told Observer.

That’s the engine driving A Beautiful Day in the Neighborhood, which is not a Fred Rogers biopic despite what you may think. We’re just one year removed from the phenomenal Mister Rogers documentary Won’t You Be My Neighbor, which thoroughly explored the beloved public figure’s life. Instead, A Beautiful Day unlocks one emotionally honest side door into his life as it follows the real-life friendship between Rogers and an award-winning cynical journalist played by Matthew Rhys, and inspired by writer Tom Junod, who grudgingly agrees to write a profile of the venerable TV icon.

“When [Fred Rogers] was interviewed, he would often slowly try and turn the interview around on the person who was interviewing him,” Heller explained. “He would start asking them questions about themselves and before they knew it, he wasn’t answering any of their questions, but they were crying and talking about their childhood. And that was really what happened to Tom [Junod] when he would interview Fred. He said he always felt like he had more karate moves than most in an interview, except when he interviewed Fred.”

If you have the time, we highly recommend you read the Esquire profile that resulted from their talks. Be warned: you’ll need tissues.

The pairing of Hanks, arguably America’s most cherished movie star, and Mister Rogers, one of the most beloved American public figures of the 20th century, would appear to be the idyllic merging of star and role. It’s a rare instance of unanimous acceptance in the social media age; an impossible example of Twitter respondents and YouTube commenters uniting under a banner of common anticipation.

Sometimes, as Occam’s razor would suggest, simplicity is the best approach. The formula that casts Hanks as a real life American hero is a winning one. Captain Phillips (which grossed $219 million worldwide against a $55 million budget), Saving Mr. Banks ($118 million/$35 million), Bridge of Spies ($165 million/$40 million), Sully ($241 million/$60 million) and The Post ($180 million/$50 million) all proved profitable while employing this approach. With Hanks’ last Oscar nomination coming in 2002, many within the industry believe this could be the perfect pairing between art and commerce.

Yet despite the synergy on paper, Heller worked closely with the veteran actor to tone down his natural charisma and presence in order to better capture the tranquil stillness of Rogers.

“I think people assume because [Hanks] is so beloved that he must have just slipped into it easily and put on the cardigan and become Fred Rogers without much effort,” she said. “But the truth is, he really went somewhere very deep with it, deep with this role, and I think people are going to be really blown away by his performance. It’s pretty transformative.”

As Heller noted, she’s drawn more to stories about internal turmoil than external extravagance and bombast. As a successful rising filmmaker in the age of the global blockbuster, that can be a difficult path to traverse. The barrier of access to theatrical filmmaking is shrinking as studios grow increasingly reluctant to support movies that don’t share any DNA with pre-established brands or long-running franchises. Those types of movies aren’t inherently better or worse than the smaller and more personal tales Heller has actualized, but they are the lifeblood of modern Hollywood. As such, the director feels somewhat torn between two worlds.

“I feel some responsibility, being one of the few women directors who are being given opportunities,” she continued. “Sometimes, that makes me want to take on some big franchise because I want to show people that women can do it. But I also know if it’s not a story that really movies me, I’m not going to do it well.”

A Beautiful Day in the Neighborhood arrives in theaters November 22, which is, ironically, the same day as Disney’s blockbuster animated sequel Frozen 2. In all likelihood, critics will spot that same deliberate and intelligent efficiency coursing throughout. 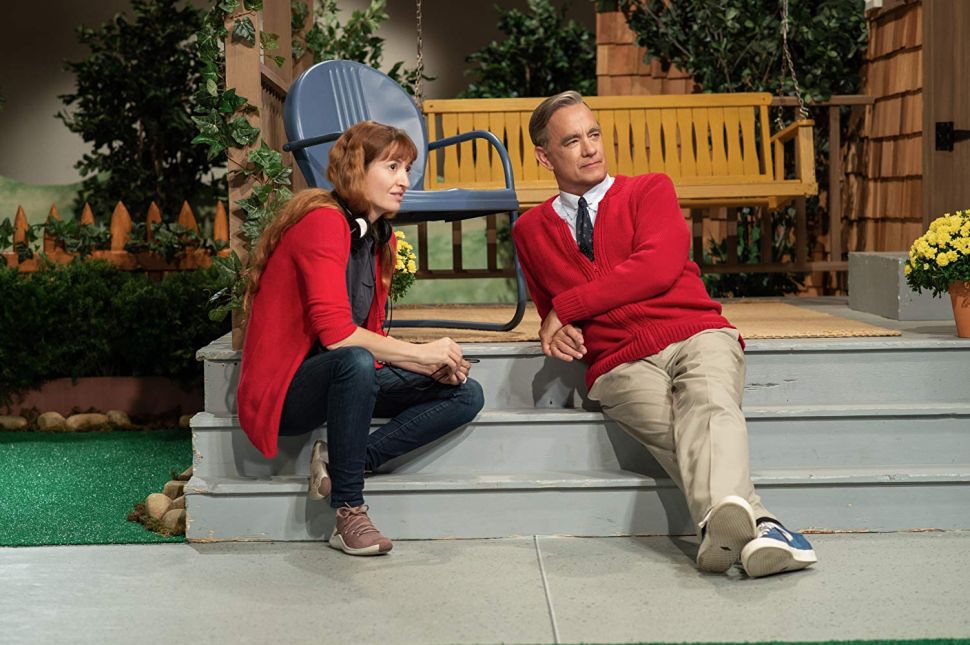