It may be theatrical heresy, but some plays may be better on film. As a partisan of live performance and new interpretations, I don’t relish the thought. But are we ever going to see a sharper rendition of Glengarry Glen Ross than James Foley’s starry 1992 adaptation, with Al Pacino in his glory, and that kickass Alec Baldwin monologue that Mamet added for the screenplay? After the cinematic giddiness of Milos Forman’s Amadeus, and F. Murray Abraham’s rapturous Salieri, most revivals of Peter Shaffer’s period drama seem pale, don’t they? And then there’s Harold Pinter’s Betrayal, the clinical dissection of an extramarital affair that unspools in reverse order. If you ever saw the (obscure) movie, you may be ruined for the stylish, earnest, but off-the-mark revival headlined by Tom Hiddleston.

The 1983 film stars Ben Kingsley as Robert, a successful publisher, Patricia Hodge as his wife, Emma, and Jeremy Irons as Jerry, a literary agent and Robert’s longtime friend. Directed with cool, incisive clarity by David Jones, the movie is not streaming or on DVD, but you can watch it on YouTube. I rented it on VHS tape when one did that sort of thing, and, for better or worse, it remains the benchmark of any Betrayal I see. So Jamie Lloyd’s production—in which attractive stars occupy an abstractly gray set and push the emotive boundaries of Pinter’s austere text—is ultimately just as frustrating as Mike Nichols’s 2013 Broadway revival, in which Daniel Craig and Rachel Weisz also misjudged the tone and subtlety of this remarkable piece.

SEE ALSO: Tammy Blanchard Always Aspired to Take on the Challenge of Audrey in ‘Little Shop of Horrors’

I appreciate the challenge faced by Lloyd and Hiddleston, who plays the cuckolded Robert alongside the appealing Zawe Ashton as Emma and Charlie Cox as Jerry. They don’t want to do stuffy, robotic Pinter; they don’t want—God forbid—to be Pinteresque. And what is that, exactly? The term usually implies repressed emotions, an aura of menace, and emotional opacity. It’s baked into the language, with those famous pauses and diamond-hard lines in which there’s a whisper of subtext, but even that remains shadowy.

Lloyd and his cast decided to drag the subtext out of the shadows and plop it center stage. The staging concept, beyond Soutra Gilmour’s minimalist design (a few chairs, some bottles and cocktails glasses) is to keep all three actors on stage throughout. When Jerry and Emma, in the middle of their seven-year affair, meet at their Kilburn trysting flat, Robert watches in the background, a ghostly witness. Emma glumly eavesdrops on Jerry and Robert’s boozy lunch, in which Robert lashes bitterly into “modern prose literature,” when in fact what disgusts him is the infidelity of his wife with his best friend, which he just discovered.

On paper, this seems a neat and evocative idea: When you’re betraying a friend or spouse, the betrayed is never truly out of the room. They’re always there, taking up space in your thoughts or conscience. But in practice, unfortunately, the concept provides diminishing returns, casting a moralizing pall over scenes and distracting from what’s being said. When Robert sits, cradling his daughter on his lap as the revolving stage orbits him around Jerry and Emma as they negotiate the tension in their decaying relationship, Lloyd’s literal-minded idea becomes especially irritating and superfluous. (It also seems intended to garner equal sympathy for all three parties, which is rather beside the point. Let Robert be an emotional bully; it’s more interesting that way.)

The other problem is one of emotional temperature. Again, to reference the 1983 movie: It’s driven by first-rate British acting, a superb balance of verbal dexterity and emotional control. When Kingsley’s Robert learns of Emma’s betrayal during a vacation to Venice, he exudes a rage that borders on homicidal, but under the polite veneer of English good-humor and civility. The contrast is, as intended, unnerving and shocking. But when Hiddleston and Ashton do the scene, side by side in chairs facing the audience, the exchange becomes indulgent and maudlin. Tears spring to eyes, pauses drag too long, and what had been a chilling exercise in power and marital sadism turns into a limp episode of couples therapy.

Mind you, it’s a problem of approach, not ability. Lanky, impish yet melancholy, Hiddleston makes for a wry, cultivated Robert, and his care with the words is evident. Ashton takes the greatest risks in exploring Emma, finding a rich nexus of insecurity, sexual power, and frustration in this woman caught between two men more alike than different. And Cox does solid, understated work as Jerry, perhaps the most hapless of the three. When Jerry learns that Emma continued her affair with him even after she confessed to her husband, he’s hurt and shocked, and the very notion of what constitutes betrayal becomes a gray area.

Despite the lingering sense that I’d witnessed the fanciest acting class in the world…getting Pinter wrong…the night is not a total loss. My friend was tickled to see Loki in the flesh, and she enjoyed the play on its own twisty, ambiguous merits. The Pinter Weird—the slippage of memory, the weaponizing of language, the erasures of time—is still there, under this revival’s airbrushed posing and pouting. I wish these artists didn’t try to outsmart or gild the author, and would play his powerful music as written. I’m not demanding monogamy for life, just 90 minutes of humble faithfulness. 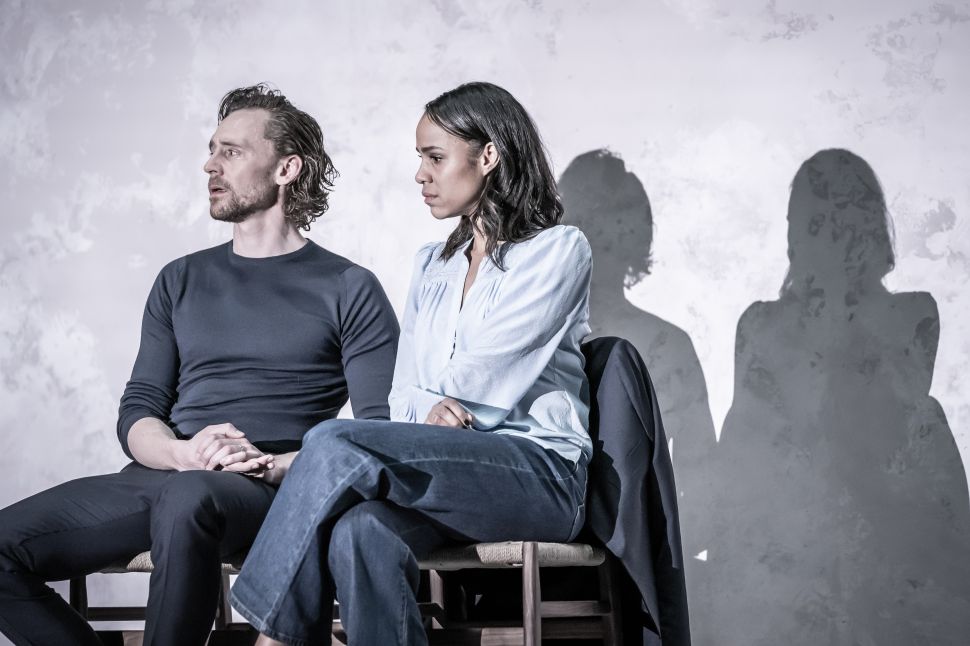