In the tiny village of Sela pri Kamniku in the Slovenian Alps, a new statue stands facing south-east, towards the recently-completed statue of Melania Trump in the First Lady’s native town of Sevnica. Melania’s statue, which looks decidedly like a smurf, was commissioned by the American artist Brad Downey and built by Slovenian sculptor Ales “Maxi” Zupevc, and seems designed to mock—although the patron and artist do not say as much. So, too, with this brand-new sculpture dubbed a “Statue of Liberty” but bearing a suspicious resemblance to Trump, standing 25 feet tall and boxy, like a colossal nutcracker. Call it the “Trumpcracker.”

The story of this monumental sculpture and its subsequent coverage has sent the village into a frenzy. I should know, the statue stands ten minutes from my home in Slovenia, and the brainchild behind it is a buddy of mine, a local architect and artist, Tomaž Schlegl.

Schlegl is a renowned character in Slovenia, and a serious architect, responsible for numerous high-profile projects around the country, including a prominent, sleek viewing platform that is near completion on a cliff overlooking the town of Kamnik, beside one of the town’s three castles.

The idea for the sculpture came to him this summer while on holiday. He began sketching, and the idea formed. Schlegl’s mind is a constant lightning storm of ideas. Many artists in this country are more radical and forward-thinking than the conservative Slovenian administrations that would need to greenlight them. But that has never stopped him, over his career that spans many decades. What was perhaps the biggest surprise is that, upon returning home from his holiday and telling some village friends of his design, the locals snapped into action and, within a matter of days, built the basic structure. They did so for free, gathering wood and building materials themselves, just because the idea spoke to them.

Schlegl is careful to say that this is a kip svobode, Slovenian for a “Statue of Liberty,” and any likeness to politicians—Trump, for instance—he leaves to the interpretation of the public. Call it the Roland Barthes defense: Proper artists do not interpret their work on behalf of others, but create, present and allow the public to interpret it as they see fit. “If people interpret it to be about Trump,” he told Observer, “if they see him in it, that’s up to them. Trump is the personification of total liberty, because he has shown that he can do and say whatever he wants, and he won’t be held accountable. He can still be president. But I leave all that interpretation to the public.”

The statue is meant to tease, but also to help make his village of Sela a tourist destination. It has already done both. His goal is to provoke thought and comment on contemporary politics. “The idea came all of a sudden, inspired by the world around me,” he continued, while conducting the air with another in an endless line of Marlboro Lights. “There’s so much populism in the world today. The new type of politics of the 21st century—which has its roots in Mussolini and Hitler, but it really emerged with the fall of the Berlin Wall—it rose with Milosevic and Berlusconi. [They are] politicians who say whatever they think the majority of the population wants to hear, but behind the scenes they are at work only for egotistical, personal motives.”

He did want the statue to gain attention, but most articles published on it to date he feels have missed the point. His aim was to explore the idea of a Statue of Liberty in this day and age. From “the time of the millennials on, the world has run on sensationalism,” he says, while noting the sensationalism of the media coverage of the statue to date. “The idea of a Statue of Liberty has collapsed. This statue is the 12th Statue of Liberty in Europe, but people are not interested in the symbolism.” There are indeed 11 countries in Europe that have an official “statue of freedom” or “liberty,” and this one, while not officially endorsed by Slovenia, is ostensibly the 12th. “We’ve come a long way downhill from the idea of a Statue of Liberty that welcomes ‘the tired, the poor, the huddled masses yearning to breathe free.’ I hope that this statue will add to the commentary on this important contemporary issue,” Schlegl says.

The statue does look like a giant nutcracker, with its right arm raised firmly in a salute that simultaneously recalls the torch-bearing arms of New York’s Statue of Liberty and a Superman arm flight into space (though if one imagines the arm lowered some 45 degrees, that would quickly shift to a fascist salute). The statue is hollow inside, made of painted wood. While the exterior is now complete, there are plans to elaborate on the statue in the coming months. Visitors will be able to step inside the hollow statue (entry will be through the statue’s, uh, rear end), and inside will be miniature models of what the artist imagines as its subject’s inner organs. A local microbrew beer will be on tap, a special blend from a regional farmer, dubbed “Freedom Beer.” The tap will be located in the statue’s groin. It sounds silly, and it is, but it is also an impressive act of imagination from one of Slovenia’s leading architects, and it is act of homespun passion for the villagers, who invested their own labor and lumber in its creation.

But the story grows more complex. Not all the villagers are enthusiastic. The local farmer on whose land the statue was built found his phone ringing constantly, with half the village concerned that this statue would make it an international laughing-stock. The older, more conservative villagers were not pleased that the “Trumpcracker” is located en route to the church.

It has already become a tourist attraction, with many a selfie taken in front of it. The official opening event for the statue was scheduled for August 31 but had to be cancelled because of the dozens of international media inquiries and a thousand-plus people expected. The village infrastructure simply could not cope.

Half of the village remains so upset—and Schlegl has been so dismayed by the reaction—that he is half considering hosting a party on Halloween at which point his creation will be burned. The other plan is to relocate the work to somewhere less disruptive. It all recalls the climax of the Frankenstein film. The politics and sociology of rural Slovenia play a key role in this melodrama. Slovenians are known for not wishing to stand out too much, to go out on a limb or deviate from the norm. Thus, suddenly becoming a media sensation makes a certain percentage of them very nervous.

“The plan was for this to be an interesting point of discussion, as an art installation, and that it would be a tourist destination in our little village,” Schlegl continues. “That was the thinking of the village culture society that decided to put up the statue. It was a collective enterprise, but not all the villagers are happy with it, and a group of them are vehemently against having it here. We certainly do not want to upset people. For this reason, we’ve decided to try to save it by moving it elsewhere. Just today we’ve decided to launch a crowd funding campaign to raise money to save this Statue of Liberty, and also to complete it. If there is enough interest in preserving it, then we will move it to a new, permanent location where it can remain and be visited by anyone who wishes to see it.” If not, it’ll go up in flames.

For the time being, Schlegl’s statue has become an international media sensation, and it has indeed drawn tourists to his village. His phone was ringing constantly while we spoke, and he showed me emails from major outlets around the world. But with the wrath of the more conservative villagers stoked, the statue may quickly end up at the stake. It remains to be seen if this Statue of Liberty will be burned. In many ways, that would be symbolically fitting of the message that Schlegl intended the statue to present: how the concept of liberty has shifted into panic and sensationalism, with populist campaigns to eliminate opponent expression bearing torches with a different, darker intent than the torch that welcomed “the tired, the poor, the huddled masses yearning to breathe free.” 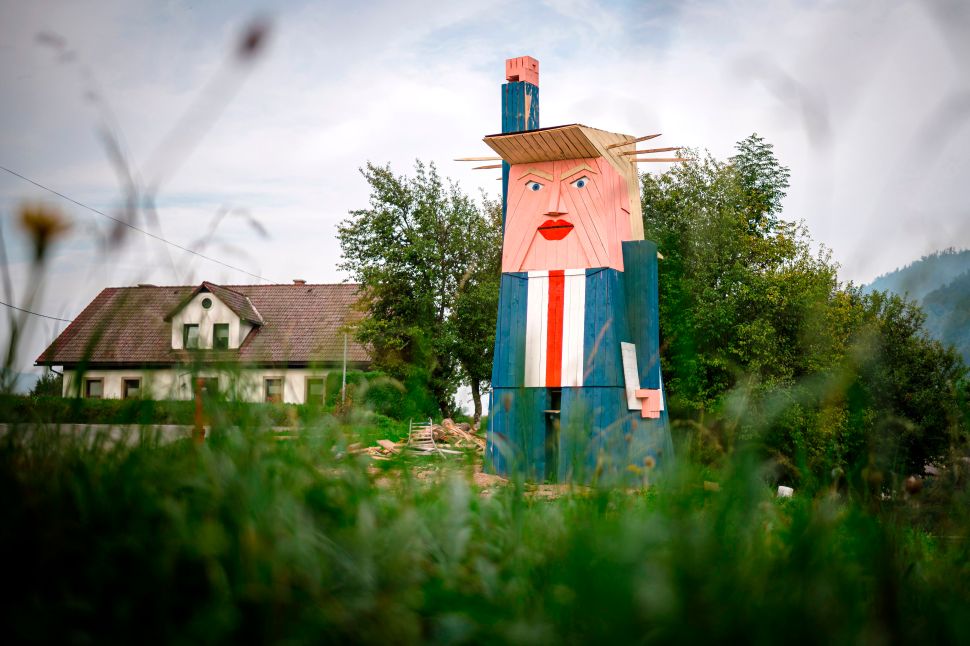