In Villains, an energetic combination of black comedy and lazy thriller that is more of an attention grabber than most of what passes for disorganized, empty-headed, juvenile horror in today’s sociopathic cinema, four very good actors give it all they’ve got for nearly 90 minutes. Considering most of what I’ve suffered through this year, that passes for praise.

SEE ALSO: Demi Moore’s ‘Corporate Animals’ Is One of the Worst Movies Ever Made

A pair of brainless lovers and amateur crooks named Mickey and Jules (Bill Skarsgard and Maika Monroe)  rob a gas station for enough money to run away to Florida. Unfortunately, they forget to also steal some gas while they’re at it, so when the tank on their getaway car hits empty, they break into a house in the woods for help. What they find is a little girl chained to a pipe in the cellar.

Before they can figure out how to rescue her, they are set upon by the owners, a deceptively innocent looking middle-aged, suburban married couple named George and Gloria (Jeffrey Donovan and Kyra Sedgwick), who turn out to be more than they bargained for. What follows is a creepy tale right out of the pages of a EC comic book (i.e. The Vault of Horror or Tales from the Crypt).

Written and directed by the team Dan Berk and Robert Olsen, the story provides fresh surprises in the events that follow, but not much logic. Now chained to pipes in the basement themselves, we watch with horror while Mickey tries to unlock their handcuffs with a metal piercing driven through his girlfriend’s tongue. Gloria nurtures a baby in her arms that turns out to be a doll. And George says things like: “There ain’t a sweeter sound in the world than a man tryin’ not to scream.” None of it makes much sense and the characters are insufficiently developed, but as the cast gets smaller, the plot gets thinner.

Everyone’s a villain here, bumbling along as they turn the tables on each other, and there’s no one to root for. I could have used more thrills. Frankly, the requisite gore is weak, even for genre fans. Still, I enjoyed the humor derived from the unfailing ineptitude of all four villains, and as they met their fates, one by one, I was sort of sorry to see them go. 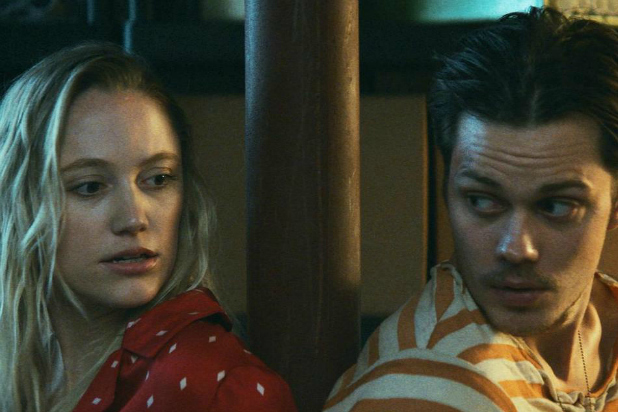