So what did we learn from this year’s Fall for Dance—the sixteenth! (How can it be?) Five programs, 20 items: it’s our annual dance-athon. What an effort…and what an effort to take it all in.

Especially as the lights are going out all over the dance world. Black is the new black. Work after work is performed in darkness and gloom. Is this an aesthetic choice, or is Terpsichore doing her bit for the environment? Or am I going blind? No, because when the lights are turned up now and then I can see as well as ever.

More worrisome is the scarcity of first-rate choreographers, but perhaps that’s always been the case. Or perhaps we elders have been spoiled, growing up on Balanchine and Ashton, Robbins and Tudor, Graham and Cunningham and Taylor, Tharp and Morris. (Too bad the powers that be didn’t manage to include the world’s leading classical choreographer, Alexei Ratmansky.)

But one of the virtues of Fall for Dance is that it spreads its wings so wide, and what you may think of as dance may not be what I think of as dance. And why be picky when the buffet is so plentiful—and some of the food so delectable?

Let’s start on a high: the solo appearance of the remarkable Alicia Graf Mack in Geoffrey Holder’s Come Sunday, which he created in 1968 for his gorgeous wife, Carmen de Lavallade, who, fifty-one years later, staged this production. Mack, recently appointed director of Juilliard’s dance division, has been one of our finest dancers for many years. (She should have had the career Misty Copeland is enjoying today, but at least one major ballet company shied away from taking her on. Well, that was then and this is now.) In Come Sunday she rises from the floor in a long white dress and dances to four superb Odetta songs: “Glory, Glory,” “Deep River,” “He’s Got the Whole World in His Hands” and “Joshua Fit the Battle of Jericho.” She’s tender, moving, vulnerable, valorous—just like Odetta’s music. Like Holder himself (and Odetta, too), Mack is an artist of integrity and command. Congratulations to Juilliard for securing her!

Copeland herself was on Program One in a short solo called Ash created for her by Kyle Abraham. Here’s what happens: to unappealing music, and wrapped in a profoundly unflattering schmatta that obscures her splendid dance body, she moves slowly upstage, rippling her arms à la Swan Lake, and then she ripples back downstage. Cheers, bravos—people are so excited to be in the presence of this poster dancer. Copeland has been a good, even exciting, performer, and she’s worked hard to justify her wildly publicized promotion: as the world knows, she was the first African American woman to become a principal at ABT. I hope she’ll find more distinguished ways to make use of her celebrity.

That other poster dancer, City Ballet’s Sara Mearns, was on hand (as she always is), this time in a worthy effort called Blanc, choreographed by Kim Brandstrup to the music of the big three: Beethoven, Schumann and Gonashvili—that’s Hamlet Gonashvili, in case you’ve forgotten the name. It’s a duet for her and the rightly acclaimed Taylor Stanley, also a City Ballet star. Out of the predictable darkness comes Stanley for a long solo; then Mearns takes the stage, and she’s either depressed or disgruntled. There are two chairs upstage, and she flings one of them into the wings and has her own long solo. Then the two stars dance together (very effectively), and then he’s gone and she’s sitting in the remaining chair until the darkness descends again and the curtain comes down. For a while things had grown promisingly visible, but I knew it couldn’t last. A few years ago Brandstrup made an interesting work for Mearns at City Ballet. He’s a practiced, anti-trendy dance-maker, and in his Jeux, Mearns, sometimes blindfolded, was movingly restrained. Perhaps the secret to her is that she’s essentially a dramatic dancer, not a classical one.

One of the blessings of Fall for Dance is that one can sample a company or an artist without having to make a big commitment. So it was for me watching the Washington Ballet, now under the direction of former ABT star Julie Kent. She chose to bring us something called Shadow Lands, which “showcases ballet technique with a splash of neo-classical that plays with angles, momentum and abstract movement to show that when broken pieces come together, the whole is better and stronger than when it is apart.” (Huh?) What it actually shows us is ten pleasing young dancers in a Jerome Robbins wannabe. The music isn’t much; the choreography—by Russian-trained Dana Genshaft, late of the San Francisco Ballet—is echt-generic. And I’ve been spared an excursion to Washington.

Nor will I have to make a pilgrimage to Johannesburg to sample the work of Vuyani Dance Theatre. Eleven highly energized and accomplished dancers perform a pulsating crowd-pleaser (Rise) to a smorgasbord of recorded music from Drake to Billie Holiday’s “Strange Fruit.” Drums, hip-hop, the works! Plus the excellent Musa Motha who, due to having had his left leg amputated at age 11, dances with a forearm crutch he uses with agility and refinement. We’ve seen Vuyani before, and nothing’s changed apart from Motha. And we’ve also seen Les Ballets Jazz de Montréal before. Dance Me gave us yet more flashy and empty choreography by Adonis Foniadakis, another dark stage, and music by Leonard Cohen. (Why not? He’s Canadian, too.)

Even more darkness from Hubbard Street Dance Chicago (remember when it was plain Hubbard Street?), but here in a worthy cause: a 2010 work called A Picture of You Falling by Crystal Pite. She’s always interesting, and this duet for a man and a woman in emotional difficulties—far less ambitious than her later work, despite an earnestly spoken voiceover—was intelligent and affecting. A perfect venture for Fall for Dance, and indeed it opened the season.

Really bizarre was the return, from last season, of Caleb Teicher’s Bzzzz, bizarre because it was the same work: tap, hip-hop, the ghastly humor of Chris Celiz and his Beatboxer. Even so, it was presented by Fall for Dance as a “world premiere.” When I asked how that could be, it was explained to me that it had been “expanded.” What last year was original enough (just) to make it amusing, is now bloated. If they do it again next year (a third world premiere?), maybe it can be deflated.

As for the Mariinsky’s At the Wrong Time, it was another Robbins wannabe, with three couples, à la In the Night, being emotional in different ways, though not different enough. A pleasant score by Villa-Lobos was its chief virtue. And, of course, there was a bow to the Cunningham centenary—a pleasing work, new to America, of a 1991 piece called Beach Birds. It was brought to us by the CNDS d’Angers, the company run by Cunningham’s highly proactive disciple Robert Swinston (who was also one of the four musicians). Eleven dancers, eleven birds; light-hearted and easy-going. Who could complain?

I won’t go into details about another French import, Dyptik’s Dans l’Engrenage, half hip-hop, half angst-ridden confrontation. Or about For Us, by Madboots Dance, about which I remember nothing at all except recordings of Shirley Bassey singing “Somewhere” and Judy Garland singing—wait for it!—“Over the Rainbow.” With a reading of a puerile poem by Allen Ginsberg. Or about Skånes Dansteater’s Dare to Wreck, another complicated relationship about a man and a woman in a wheelchair. Or Malevo’s Salvaje, drums, wild hair, glowering stares, macho to the max. (You may have caught them on America’s Got Talent, or in Las Vegas.) Or an excerpt from Ailey’s portentous Lazarus, which you can catch up with during the Ailey season later this fall.

But you should know about this year’s contribution from Monica Bill Barnes’ The Running Show—she’s indefatigable in promoting the fun, the excitement, the virtue of dance, for all ages from seven to 70. Lots of serious kids demonstrating and talking, and she herself a convincing ambassador for the art. You should also know about the extended sections from Mark Morris’ Eleven from Mozart Dances—a lovely work, lovingly danced, but somewhat confused and lopsided as presented in this truncated version of the original. This was not a very good idea—we should have it whole.

Most obnoxious offering: Tayeh Dance in Unveiling, choreography by Sonya Tayeh—you can witness her art in the current Broadway show Moulin Rouge! The Musical. One dominating self-assured musician, Moses Sumney, and three well-known dancers: Robbie Fairchild, Stella Abrera and Gabe Stone Shayer. But they could have been anyone as they slithered and groped in the semi-dark.

Most happy surprise: Dust Duet, by Akram Khan, from the English National Ballet. Khan is a major force in British ballet, but this is the first of his works to convince me that there’s a real talent there. This impassioned “duet” is part of a much longer work; perhaps we’ll see all of it someday.

The finest event of the season was by the greatest choreographer represented: Chronicle, by Martha Graham. Made in 1936 during her political period, it was originally very long. Some years ago, the current Graham company began reconstructing three sections of it, and they were what was on display at the City Center. The resounding music is by Wallingford Riegger, the stark scenery is by Isamu Noguchi, the costumes are by Graham herself, one of the most remarkable of her many interactions with fabric. What about that breathtaking dress she wore in the first section—long and full and black, until suddenly it’s flaming red.

An amazing dancer, Leslie Andrea Williams, performed the Graham roles in what was not only the finest event of the season but the final one. Williams—tall, mesmerizing—left us gasping at her heroic performance. But everything was heroic: this was dancing on the largest scale, the entire Graham company rising to the occasion, everyone utterly devoted and impassioned, the way it must have been with the dedicated acolytes of the early Graham companies. The Fall for Dance audience, which automatically applauds everything, responded heroically, too—standing, cheering, and I suspect weeping. They didn’t want to leave the theater, and neither did I.

This was a stunning climax to what, despite the usual aberrations, was the most gratifying Fall for Dance season in years. 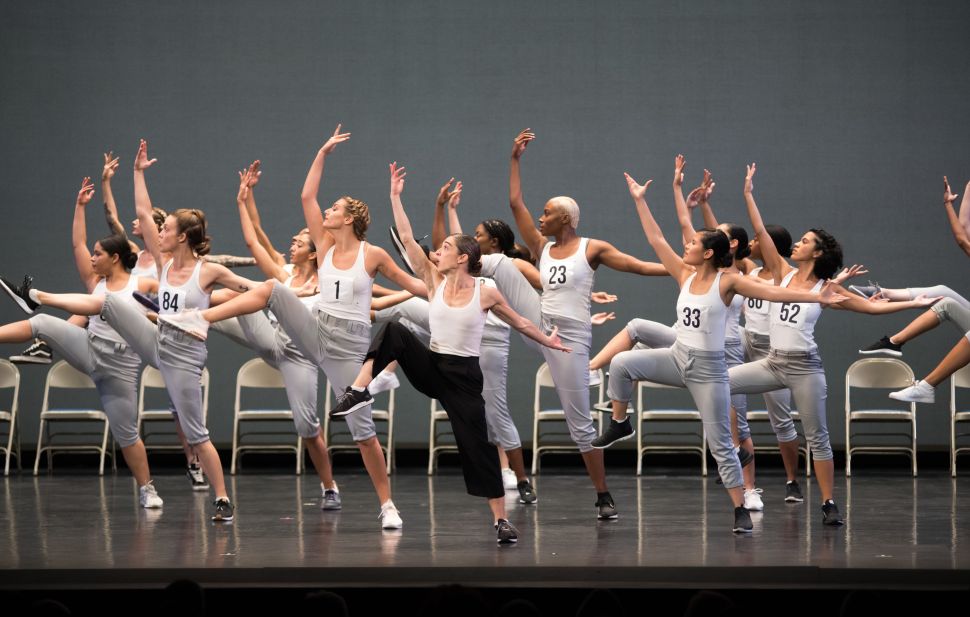