ABT ran (or limped) the gamut in its annual two-week season at the Koch. But outside the gamut—outside the time-honored conventions—was the speech at the Gala by Lisa Lutoff-Perlo, “President & CEO, Celebrity Cruises,” which has fairly recently “partnered” with the company. Her partners had apparently not made Ms. Lutoff-Perlo aware that gala speeches, although obligatory, are meant to be formulaic: gracious acknowledgments to All Who Made This Wonderful Evening Possible. We had those, of course, but we also had what must have been half an hour of rambling thank-yous and self-congratulatory remarks about Celebrity Cruises and its forward thinking policies. It turns out that there are now women officers—including captains—up on the bridge of Celebrity Cruise ships! Heartening news, no doubt, for superannuated ballerinas transitioning into new fields, and undoubtedly an inspiration for ABT’s “Women’s Movement” initiative, announced last year.

One main theme of the season, then, was the slate of ballets by women choreographers. The other was the celebration of Herman Cornejo’s twenty terrific years with the company.

These two themes came together in A Gathering of Ghosts, the ambitious new work by Twyla Tharp featuring Cornejo. He is the Host, surrounded, the program reveals, by the ghosts of Louis XIV, Marie Antoinette, Murasaki (The Tale of Genji), North Wind, Greased Lightning, Mme. de Staël, “Irene,” and Proust. Plus four “Consorts,” brightly costumed in vertical stripes, who happily consort with the Host. The music—in my view not especially dancey—is a string quintet by Brahms. The elaborate costumes are by that old Tharp collaborator Norma Kamali, and the beautiful lighting is by the great Jennifer Tipton. Why these historical and literary figures are ghosting the Host is far from clear. Nor is it really clear why Blaine Hoven (Louis XIV) is wearing an elaborate evening gown. (Was le Roi Soleil a cross-dresser? Or Mme. de Staël? Or Lady Murasaki?) Clearly, Twarp was having fun.

Cornejo himself was beautifully presented—Tharp has often worked with him before, and knows what he’s capable of. The pirouettes, the double air turns, the modest yet indisputable command, the dynamism—everything the audience loves about this unpretentious star, so boyish yet so virile. What it didn’t do was extend him; that would have to wait until the end of the season when he made his New York debut as Balanchine’s Apollo. So A Gathering of Ghosts was a provocative homage, but it wasn’t a revelation.

The other new works ranged from slick to humdrum. Jessica Lang was represented by a short piece set to three Tony Bennett recordings and featuring the company’s new fun couple: Catherine Hurlin (“Greased Lightning” in the Tharp, and zooming to stardom) and Aran Bell, all coltish charm and also on his way. Alas, everything about this throwaway was throwaway. Bennett sings a sketchy “I Got Rhythm” (the program mislabels it as “I’ve Got Rhythm”), ignoring the fact that this is the song that Ethel Merman belted into the bleachers in the Gershwins’ Girl Crazy to an ovation that jumpstarted her career as the biggest star Broadway has ever seen. Nothing sketchy about Merman!

Some works we didn’t need to see: A Time There Was by ex-dancer Gemma Bond—Benjamin Britten’s music is pleasing, but not for dancing. Some Assembly Required, made by dancer Clark Tippet in the 1980s for Amanda McKerrow and her husband John Gardner and now revived by them, is about a fraught relationship—nothing ever changes. James Whiteside’s New American Romance is borderline: Debussy piano music, pretty costumes, clever juxtapositions. But what then?

Some works we did need to see back: Ratmansky’s thrilling The Seasons, a rich (some would say over-stuffed, but not me) feast of invention; and Tharp’s Deuce Coupe, 46 years old but new to the company this past May, looking a little studied perhaps but masterful—and fun. The Beach Boys! Graffiti! Tharp on a roll!

We always need to see Balanchine’s Theme and Variations (created for ABT in 1947), but this time around it was a mixed blessing. Sara Lane and Joseph Gorak were a disastrous lead couple—he couldn’t get her up on his shoulder, and just didn’t have the strength for this ultra-demanding role. Devon Teuscher, a real ballerina, had the technique and the glamour—a very satisfying debut—with reliable Cory Stearns as her partner. There were no difficulties here. The production as a whole, though, lacks the brilliancy of City Ballet’s approach to it: Balanchine at his most classical is not ABT territory.

The most anticipated revival was another great work by Balanchine, his 1928 Apollo, the earliest of his works to survive. (He was 24 when he made it.) Here is the true birth of neo-classicism, and the birth of the crucial Balanchine-Stravinsky partnership. It’s been out of ABT’s repertory for a dozen years—who knows why?—but now it was back, with three casts, culminating in Cornejo’s New York debut in it. Since ABT uses the original opening and ending, we first see Apollo newly born, as he’s unwrapped by his mother’s handmaidens. He can hardly stand, his movements are awkward, unsteady. The ballet is about his progress to Godhead.

The first of ABT’s Apollos was the elegant, subtle Joo Won Ahn, who understood Apollo’s tentativeness and made credible his growing confidence and power through his encounters with his three muses, Polyhymnia (mime), Calliope (poetry), and Terpsichore (dance). This was a thoughtful and convincing performance. Calvin Royal III, always a magnificent presence, emerged almost full-fledged, staggering around packed with energy—already a boss. I didn’t find in him a deep understanding of Apollo’s progress, but if he keeps working on it and doesn’t rely on his look he’ll get there. He’s in the Apollo Belvedere tradition—a danseur noble, like d’Amboise and Martins before him. Ahn is in the Apollo Musagète tradition, the Apollo of the Muses, closer to the original, small-scale Serge Lifar.

Cornejo? A wonderful blend of the two. Yes, small-scale, but vital, masterful, visionary. Why hasn’t he been dancing this role—the most important male role of the 20th century—all along? Maybe because Apollo doesn’t call for his amazing virtuosity. Tharp shows us that dazzling Cornejo; Balanchine shows us his deep artistry.

As for the three Terpsichores, they were Stella Abrera, Hee Seo and, paired with Cornejo, underwhelming Misty Copeland, paired with Cornejo. Surprised? None of them had anything special to tell us. Perhaps we New York City Ballet devotees were spoiled by the Suzanne Farrell years. She was a match for this or any god, new or seasoned. The moment she stepped on the stage, the contest among the muses was over. 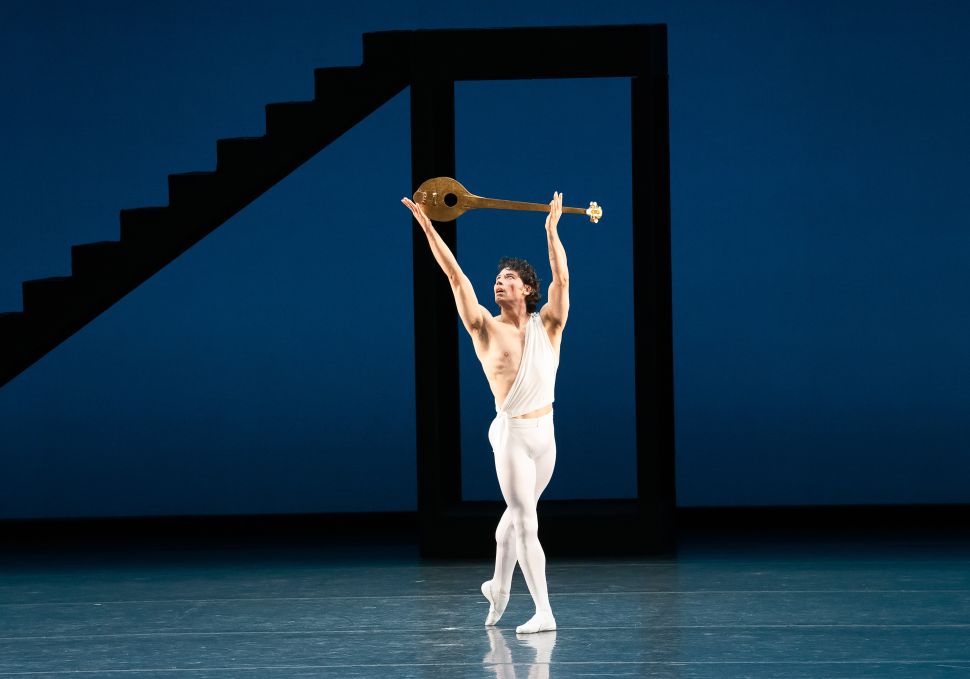