Although they had been splintering since 1988, Talking Heads officially broke up the year before I graduated college and moved to New York. Perhaps if I had followed through on my longtime fandom, I could have seen them in concert, but no, dammit. Never mind that their eight studio albums had formed the sonic backbone of my teenage angst and pride, the closest I ever got to Heads live was watching Jonathan Demme’s concert film Stop Making Sense over and over as preparation for a high-school Air Band contest (I was drummer Chris Frantz). And while I’ve enjoyed many of frontman David Byrne’s solo projects (including the splendid, immersive musical Here Lies Love), I resigned myself never to see one of rock’s greatest, most inventive post-Beatles ensembles in the flesh. Had I three wishes, after world peace and a Manhattan one-bedroom, my third would be for Talking Heads’ emotional wounds to heal so they could play a kickass, five-hour set of tracks from 77 to Naked.

At American Utopia, my wish was not granted, but I’m still grateful for the experience. A hermetic yet loose-jointed amalgam of dance, concert and TED Talk, the sweet, quirky piece comes across as David Byrne’s literal brainchild. Our spectrumy art-rock magus is revealed at the top of the show contemplating a pink fake cerebellum. We’ll never have more cells in our gray matter, Byrne tells us, as when we’re born; they die as we grow. So, goes the punch line, the older we get, the stupider we get.

The mild-mannered indie god is clad in a gray-silver suit, no tie or shoes, the same costume worn by other dancer-musicians who join him. There are 12 performers including Byrne, which means (phew) he’s not Jesus Christ. Over the next hundred minutes he sings old and new tunes, the band rocks out magnificently, Byrne chats us up, and there’s a lot of cute gestural dance. What are we to conclude from the fact that they all wear identical uniforms? Are the musicians hidden facets of Byrne’s strange, recessive personality? Is the group as a vision of future humanity, creatures who have evolved beyond the need for individual style? Or is it just supposed to look cool?

As with a lot of Talking Heads’ weirded-out, often wistful lyrics, your guess is as good as mine. In a sense the entirety of American Utopia—choreography and musical staging by Annie-B Parson and “production consulting” by Alex Timbers—takes place inside Byrne’s white-fuzzed noggin. Most of the songs are his; he’s the only one talking up there. He gives a teaspoon of autobiographical data (watched a lot of TV in his 20s), but mostly he annotates the songs and urges us to vote and save the planet. The action takes place in an empty space with silver beaded curtains on three sides, which rise and fall like the mercury hull of a friendly spacecraft from a cheerful dimension. Despite the high-art visual trappings that suggest mid-career Robert Wilson meets Afrofuturism, Byrne wanders around, occasionally working his guitar, like that strange older uncle who offers oddball non sequiturs at Thanksgiving.

Enough about the table settings, you say. What’s on the menu? The set list is a fluid mix of classic Heads tunes and new tracks from Byrne’s 2018 release, also called American Utopia, plus Janelle Monáe’s electrifying protest song “Hell You Talmabout.” As a diehard fan, I will now say the most predictable thing possible: I much preferred the old songs, and the new ones (apart from Monáe) left me cold. Luckily, the roving, wireless musicians—and backup singers/dancers Chris Giarmo and Tendayi Kuumba—sound absolutely cracking, tearing through nimbly orchestrated versions of “This Must Be the Place (Naïve Melody),” “Blind,” “I Zimbra,” “Don’t Worry About the Government,” “Slippery People” and big, juicy renditions of “Once in a Lifetime” and “Burning Down the House” that got the crowd on its feet doing its best Boomer white-funk freestyle. At its best, these numbers had the sonic force and exuberance of an actual concert, and the rush of aural nostalgia was buoyed by world-class musicianship.

Talking Heads and Byrne solo were always about splicing musical idioms from every corner of the globe: funk meets minimalism and then collides noisily into African polyrhythms. It could be the soundtrack to the most awesome dance party, or music for sitting at home being paranoid. The words, barked or crooned or muttered moodily by Byrne, are tense dispatches from a mind under glass, an observer of life who finds humans at once wonderful and frustrating. I must admit I found the mix of ecstatic music-making and aesthetic constraint similarly joyful and puzzling. Is this coolly mechanized realm the utopia referred to by the title, a place we want to be, a monochromatic escape from the overstimulating particularities of life? Or are we witnessing what it’s like inside the prison of being David Byrne? Of being ourselves? You know the etymology of utopia, is “no place,” right? Fittingly, Byrne chooses Little Creatures’ nihilist frontier anthem, “Road to Nowhere,” for the encore. If the road ends here, I’m totally OK with that. 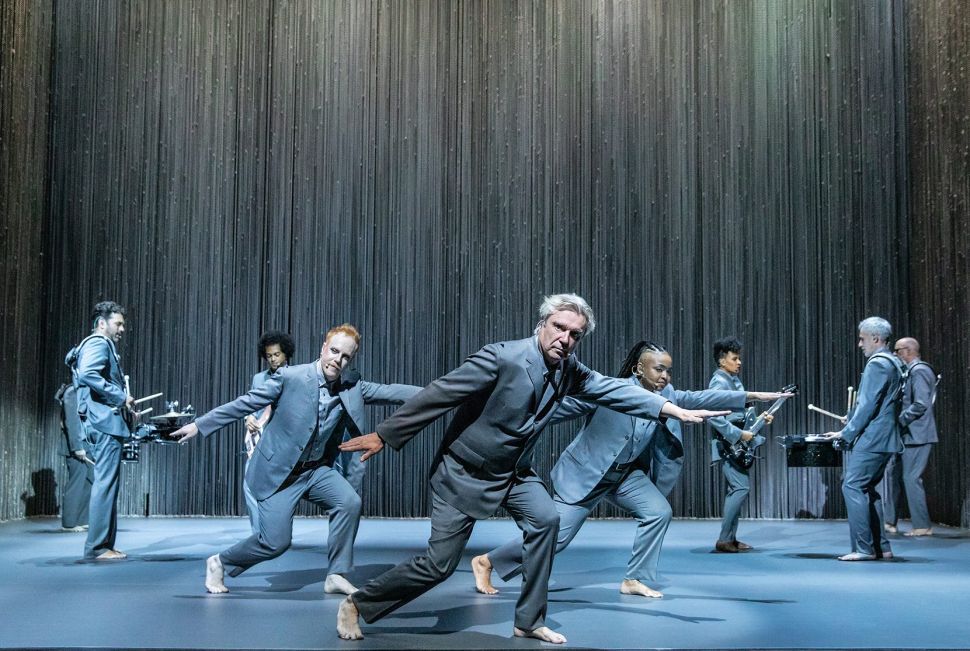