On Thursday, Sotheby’s announced that it will offer up a headlining item for its Old Master Drawings auction on January 29, 2020, that will be sure to delight fans of the Italian Renaissance: the only known preparatory drawing done for Triumphs of Caesar, a series of nine paintings depicting Julius Caesar’s victory in the Gallic Wars made by the painter Andrea Mantegna. Mantegna may not be as popularly well-known as Michelangelo or Botticelli, but his sharp and sophisticated painting style made him an extremely influential figure among his peers and throughout art history. Accordingly, Sotheby’s estimates that the drawing in question will likely be sold for upwards of $12 million.

There’s a good reason for this high estimation. Even if you don’t immediately recognize the name Mantegna, the “Renaissance drawing” category in and of itself tends to draw a lot of attention. A sketch attributed to Leonardo da Vinci was estimated to be worth nearly $16 million in 2016, and that kind of high-stakes interested has remained consistent within the last couple of years: in 2009, for example, Christie’s sold a drawing by Raphael for $48,009,960.

SEE ALSO: Collection of Diane Disney Miller, Daughter of Walt Disney, to be Auctioned Off by Christie’s

Mantegna, who was born around the year 1431, was an ambitious young talent who married into the Bellini family to further his career and who studied under Francesco Squarcione, an influential tailor and instructor from Padua. Mantegna spent the crucial years of life as court artist for the wealthy Gonzaga family, where he honed a technique that had a lot to do with imitating the look of classical sculpture. Mantegna’s paintings weren’t lushly romantic; rather, they tended towards appearing diligently technical, even in their scale and scope. Giovanni Bellini, Mantegna’s brother-in-law, was deeply influenced by him, as was the German artist Albrecht Dürer.

“The discovery of a previously unseen underdrawing, more than five hundred years after it was made, is a moment of considerable importance for the study of this complex, intriguing and highly influential master of the early Italian Renaissance,” Cristiana Romalli, Senior Director of the Sotheby’s Old Master Drawings Department, said in a statement. “By examination under special filtered infrared light, we were able to detect the hidden figure of Helios, revealing a major change in the composition that proves Mantegna’s authorship. This change in fact defined his whole approach to the finished painting that we see today.”

Romalli’s mention of the “hidden figure of Helios” is a reference to the fact that in the finished version of Triumphs of Caesar, Helios, the Roman sun god, does not make an appearance. In his draft drawing for the final product, Mantegna evidently initially sketched out Helios but eventually decided to replace him with Aesculapius, the Greek god of medicine. These revisions and preliminary edits are fascinating examples of artwork in flux. Paintings, after all, don’t spring fully formed out of the minds of their creators like Athena blooming from the skull of her father, Zeus. Like with any other type of creative product, there needs to be a first draft. 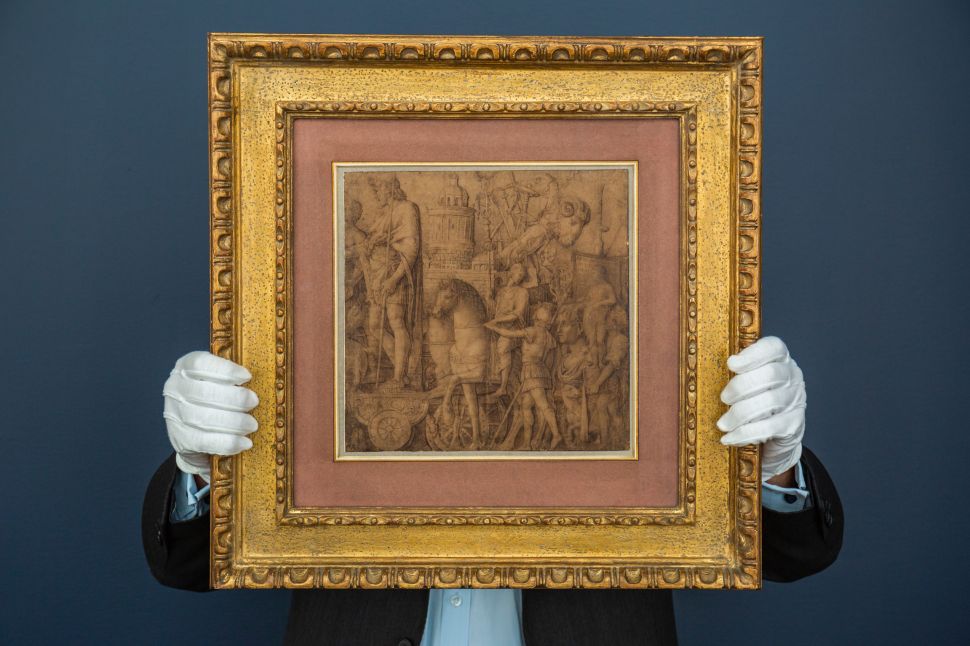