The artist Anicka Yi specializes in manufacturing smells that destabilize you. The ingredients she has used in her concoctions have already included the bacteria of 100 female artists, powdered milk, and the tissue of carpenter ants, all artfully employed to explore notions of consciousness and the potential of life forms. While her scents typically waft freely through galleries, three new ones will be bottled for personal spritzing through a fragrance line Yi is releasing on November 21.

Titled Biography, the series consists of three scents Yi developed with her longtime collaborator and master perfumer Barnabé Fillion. Each is a tribute to a female figure and intends to challenge traditional notions of femininity—a running theme in Yi’s practice.

SEE ALSO: Eva LeWitt, Sol LeWitt’s Daughter, on Appreciating Her Influences and Making Her Own Space

There’s Radical Hopelessness, a sweet, earthy fragrance based on the pharaoh Hatshepsut, who insisted that she be depicted as a male king. Shigenobu Twilight, a delicate perfume, is inspired by Fusako Shigenobu, founder of the militant Japanese Red Army. The third, Beyond Skin, has the most enigmatic and elastic identity: It imagines an artificially intelligent entity that encapsulates the experiences of every woman to have lived and will live.

“So many more portraits and stories could arise, and I wanted to create a scent that could embrace all of those,” Yi told Observer. “So it’s more of a symbolic apparatus to convey all the experiences.”

Each perfume has a list of memorable ingredients that draw on its muse’s background. “There’s a real narrative in these,” Yi said. “Shigenobu was an exile in Lebanon, and Lebanon is known for its cedar, so there are two kinds of cedar in Shigenobu Twilight.” Top notes of yuzu, shiso leaf and black pepper add fresh, herby smells.

More intense is Radical Hopelessness, which features a base of sandalwood and patchouli with top notes of pink pepper, juniper and cardamom. But the most unconventional vial to keep in your perfume collection might be Beyond Skin. It mixes hints of suede, myrrh and rose but is also endowed with plant and animal elements—specifically, top notes of red seaweed and the secretion of a civet, a cat-like creature native to Indonesia. The result, slightly sterile, like old, unused soap, is oddly alluring; it’s an aroma fit for the ineffable.

“I wanted to capture the mood of a startup that goes bankrupt,” Yi said. “It’s an empty office floor and there’s the smell of fried and frazzled electronics and cables and an emptiness and desolation. There’s a nice balance of this industrial-electronic with the animal and plant.”

This might not sound like an easy fragrance to wear. As Yi said of her trio of scents: “There’s definitely an element of abject humor that went into this. Abjection is so underrated.”

Biology highlights female figures, but the line is designed to be gender-neutral. “Trying to expand the notion of what is female, if anything, is really blowing up the distinctions between the reductive two genders that we have as humans,” Yi said. “We’re on the precipice of so many radical technological breakthroughs, whether it’s embracing new speciation, human-machine, human-animal hybrids. These containers we have around identity are far too limiting, and they don’t serve us anymore.”

The fragrances will be released through Dover Street Market in a limited-edition run of one thousand vials holding 10 millilitres, each housed in clear cases embellished with preserved insect specimens. Don’t sweat if you miss out on this round: Yi is hopeful that Biology will continue to grow. “I certainly don’t want to stop it there,” she said. 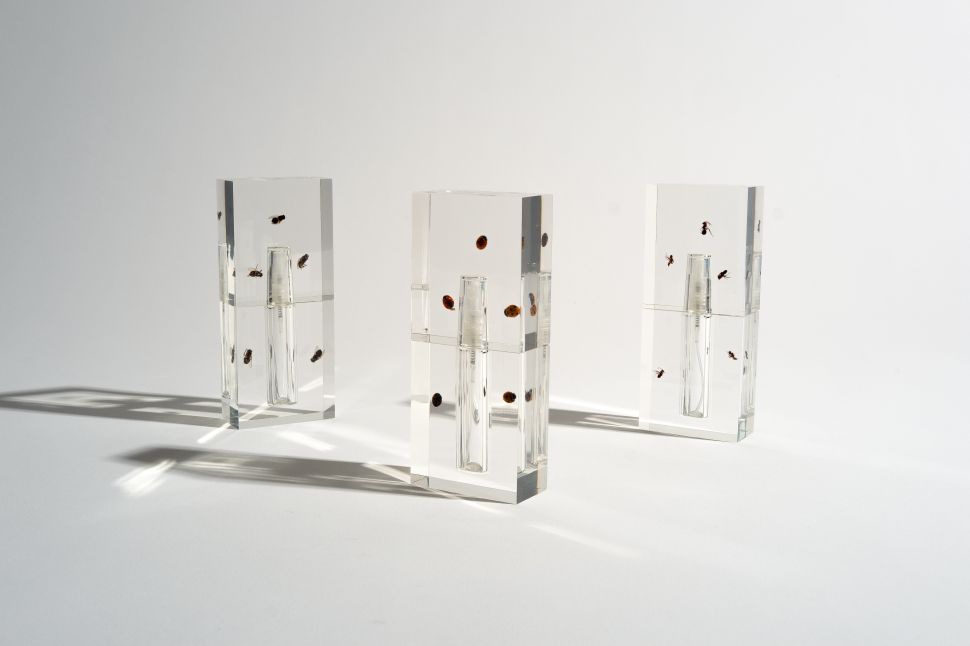