Emotions always run high at the Cannes Film Festival. But this time was different. “The emotions yesterday at the theater, it was kind of embarrassing,” said Antonio Banderas when we spoke just after the festival premiere of Pain and Glory in May.

As star of Pedro Almodóvar’s triumphant semi-autobiographical drama, Banderas had the unenviable job of playing an Almodóvar doppelgänger, right down to the director’s signature spiky salt-and-pepper mane. But the black-tie audience didn’t mind at all. “I have never received an ovation like that,” he said about the film’s premiere. “I didn’t know what to do! There are only so many times you can do this,” he said, flashing a big smile, touching his heart, and nodding to an invisible crowd. “I looked at [co-star] Penelope Cruz and said, ‘Oh, shit! Here we go.’”

SEE ALSO: The ‘Roma’ Effect: Why Three Legendary Directors Are Embracing Autofiction in 2019

He was right to be overwhelmed: a week later, Banderas won the festival’s prize for Best Actor. And now, as the film opens in the U.S., he’s standing firmly alongside other buzzy male leads like Joaquin Phoenix, Robert De Niro, Leonardo DiCaprio and Adam Driver as one of this year’s potential Oscar nominees.

But for now, at a press luncheon in Cannes to celebrate Pain and Glory, he’s relaxed and well-rested. It’s been a long time since his film debut in Almodóvar’s 1982 film Labyrinth of Passion. And while the two have made eight films together, Banderas didn’t work with Almodóvar for a 22-year stretch. During that time, Banderas built a durable Hollywood career with movies like Philadelphia, Interview with the Vampire, The Mask of Zorro and the Shrek franchise. But it wasn’t until 2011’s the Skin I Live In that he starred in an Almodóvar film again. “We kept the relationship,” he explained. “We’re friends. He came to my house. We went to dinner in Madrid. But we never worked.”

And reuniting for Skin wasn’t easy, either. “After all those years, I arrived at the first rehearsal with all my little things that I had learned in those 22 years. I had worked on my voice, I had worked on my body. And Pedro said, ‘All these things I cannot use. I am not interested whatsoever in these things. I want Antonio Banderas. Where are you?’”

“It was rocky,” he said with a laugh. “It was rough. Comfort with Pedro doesn’t work. He wants you in a fresh state. He doesn’t want you to use tricks that you’ve been using before that have worked for others and work for you and work for audiences. No. It was truth. If you resist him, it’s going to be more painful. If you abandon yourself, it’s going to be fine. And then you get access to places that are very difficult to negotiate in a movie.”

“And I remember I saw the movie with an audience for the first time at the premiere in Toronto,” he continued. “And I really was surprised! I couldn’t believe the character he was able to get out of me.”

Banderas is in awe of how Almodóvar can access those untapped wells of emotion. “You can be a great technical director,” he explained about lesser filmmakers. “You can be fantastic in terms of narrative, use of color, framing. But emotions are a very uncontrollable place. You can do all these other elements perfectly, and you never get there. You can have a very cold picture that’s beautifully put together. But you don’t have access to the heart.”

Pain and Glory is a deeply felt film, and a confessional of sorts for the 70-year-old filmmaker. The drama revolves around the fictional Salvador Mallo, a much-beloved Spanish director who has lost his inspiration to work and is fighting a lifelong litany of physical travails, including migraines and spinal pain. A spontaneous decision to take some heroin and relieve some of the suffering opens his mind to memories of his childhood, which then leads him to chance encounters that cause a reevaluation of his life.

In hindsight it seems like heresy to imagine anyone else as Mallo, but initially Banderas wasn’t the director’s first choice. “I thought about him, but I was not completely sure,” Almodóvar said at the luncheon. “I needed to have a talk with Antonio about the character. Because I wanted to show his fragility. And he was really conscious of that. And he really did it.”

Banderas was initially thrilled at the prospect of another Almodóvar film. “When he called me to do another movie, I said, ‘Oh my God. What an opportunity.’ But when I saw the script, I couldn’t believe it. There were things there that I never thought that he was going to expose. Not even to his friends. Imagine to his audiences! Especially everything that has to do with his mother, his boyfriend. Even with actors.”

It was daunting, but Banderas had also gone through a health scare that made him rethink his life: a heart attack in January 2017. “It changed my life,” he said. “The night that I had the heart attack, I was staying at the hospital. And there was an older nurse who came to me and said, ‘Why do you think people say I love you with all my heart? Why don’t they say, I love you with all of my brain? The heart is not only a pump that throws oxygen all around your body. It’s a warehouse of feelings. And you are going to get very sad in the next few months.’ I said, ‘I’m going to get depressed?’ She said, ‘No, depression is a medical condition. You are going to get sad.’ And it was true! In the months that followed, I got very sad. I’d watch a movie and start crying. I’d read poetry and cry.”

Almodóvar noticed the difference. “Pedro called me and said to me, ‘Whatever emotionally happened to you after the heart attack has led to something new that you didn’t have before. Put it in the character. And so I did. I knew exactly what he was talking about.” 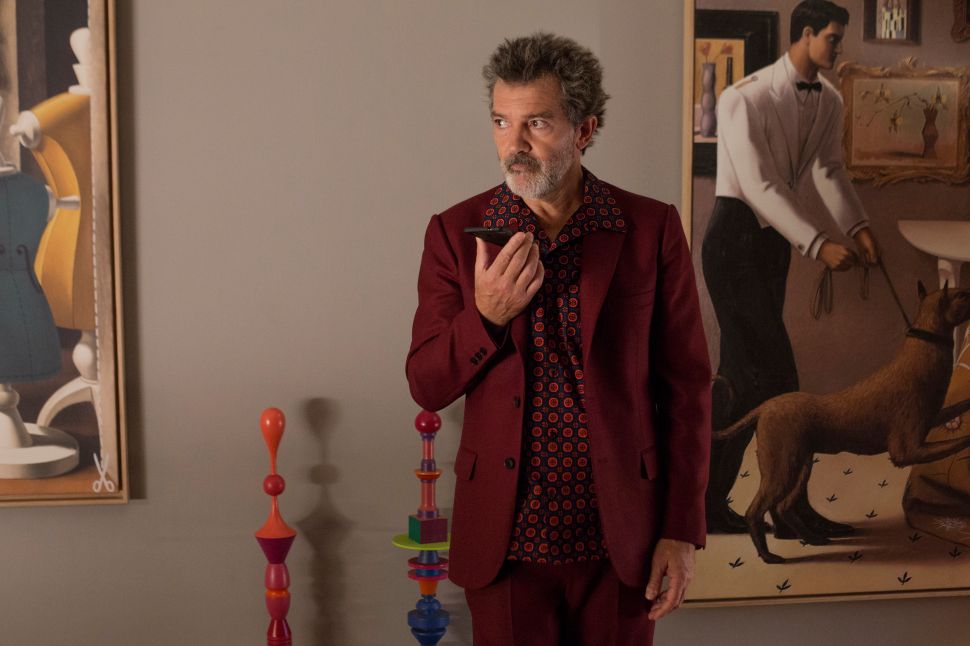