Microsoft founder and the (former) wealthiest person on Earth, Bill Gates, is turning 64 on Monday. If you were someone in his life or merely an admirer from the outside, you might be scratching your head at this time of year over what birthday present you could possibly give to the man who already has everything.

Those who have celebrated birthdays with Gates certainly understand that it’s not the materialistic part of a birthday gift that matters.

For the past several years, Gates’ wife Melinda has posted photos of their happy memories on Instagram on his birthday to honor her husband’s work and talent.

Last year, Melinda shared a photo of the couple laughing together at the 2018 Goalkeepers event hosted by their charity vehicle, the Bill and Melinda Gates Foundation. “It’s no secret that he’s a little nerdy. But what surprised me when I first met him is how funny he is, too,” she wrote in the caption. “We’ve been laughing together since that very first dinner.”

In 2017, Melinda posted a photo supposedly of their honeymoon in Hawaii from 1994. “Curious, fun, brilliant… and looks great in a lei,” she wrote.

It’s no secret he’s a little nerdy. But what surprised me when I first met him is how funny he is, too. We’ve been laughing together since that very first dinner. Happy birthday, @thisisbillgates! 🎉

There are more heart-warming moments like these. But they would probably pale in comparison to what a bunch of strangers, far away from America, once did for the Microsoft founder.

In 2015, when Gates turned 60, thousands of students at a school in Chennai, India threw him an unusual birthday party—without him even being present. Some 5,000 schoolchildren held up a giant cutout of Gates splashed with the slogan “Grow Rich. Help Others” and small masks of his face in a playground to honor his philanthropic work in India.

After the outdoor gathering, the children heard a lecture about the Gates Foundation and watched a 45-minute video sharing the philanthropist’s life story.

As to what birthday presents Bill Gates wants most for himself, the answer might come across quite boring.

When asked what people have given him for his birthday during a Reddit Ask Me Anything in 2013, the entrepreneur blurted “free software,” before admitting he was just kidding. “Books, actually,” he said.

A well-known bookworm, Bill Gates regularly updates the public on what he’s been reading via his personal blog. His latest reads, as usual, fall heavy on the history and social science side. Books from his summer reading list included Jared Diamond’s Upheaval, Rose George’s Nine Pints and his wife’s newly published memoir, The Moments of Lift, among others. 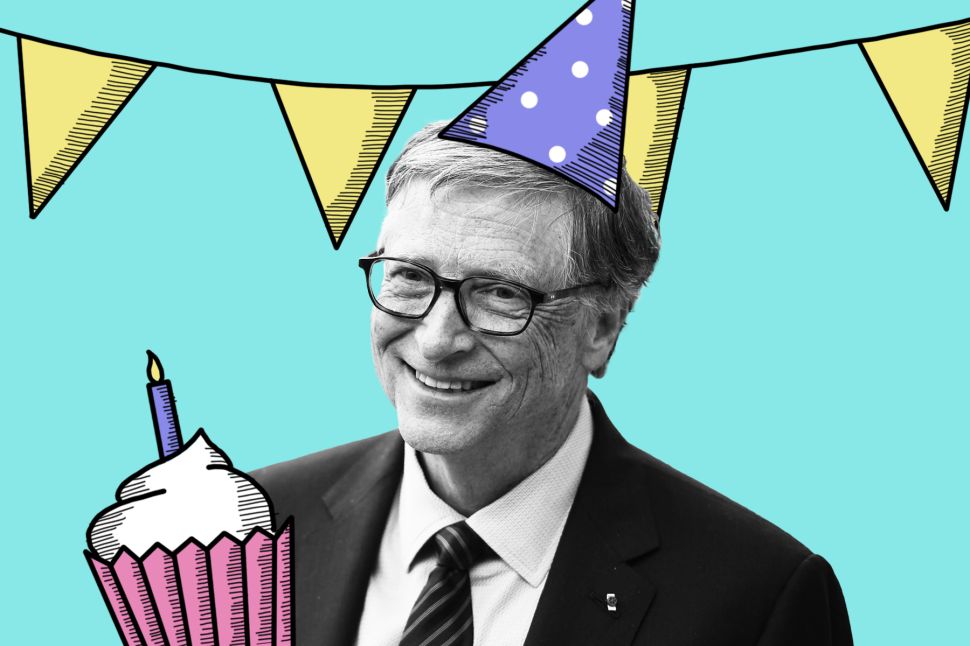