Within the art world, the lionization of young prodigies who burst onto the scene seemingly fully formed is as regular as the seasonal auction cycle. Bill Traylor, an artist who was born into slavery in 1853 and who spent most of his life working as a farm laborer in Alabama, decidedly does not fit into this category. Traylor took up drawing and painting at the age of 85 and cultivated a body of work that is astonishing both for its visual power and for the conditions it defied to exist in the first place. On Tuesday, an exhibition of Traylor’s work facilitated by the William Louis-Dreyfus Foundation will go on view at David Zwirner gallery on East 69th street, giving the singular artist a small amount of the outsized attention his work deserves.

Louis-Dreyfus, the father of the famous Julia, was a lifelong collector who developed a particularly strong affinity for Traylor’s creations and who wanted to share their brilliance. Louis-Dreyfus died in 2016; he had been promoting Traylor’s work and trading in it for decades. Now, the foundation is selling some of the collection through Zwirner and at auction to benefit the nonprofit organization Harlem Children’s Zone. Traylor, who died in 1949, has been accruing big auction numbers at venues like Christie’s recently. In January of 2019, an “Outsider and Vernacular Art” sale at Christie’s fetched $396,500 for Traylor’s Woman Pointing at Man with Cane (1939-1942), even though it had been estimated to sell for between $40,000 and $60,000.

Artistic institutions all around the world are examining their own histories of colonialism, and the art world in general is now reckoning with all the talented people that have been overlooked over the years. Traylor’s work in particular sticks out for its turbulent lucidity and fantastical logic. His renderings of dogs, horses, dancers and houses seem to interact with one another on both realist and metaphysical planes. For example, although his titles tend to be very straightforward (like Man with Spotted Shirt, Hat, and Umbrella, which is exactly what it says it is), Traylor’s depictions of people have a discernibly uncanny aura, like they’re combinations of actual observed humans and the artist’s projection of what they might be thinking or feeling.

“[Traylor’s] images are steeped in a life of folkways: storytelling, singing, local healing, and survival,” Smithsonian Curator of Folk and Self-Taught Art Leslie Umberger said in a statement. “They look freedom in the eye but don’t fail to note the treacherous road African Americans had to travel along the way.” Forty of Traylor’s remarkable pieces, many of which were done on strips of discarded cardboard, will be on view at David Zwirner starting tomorrow. 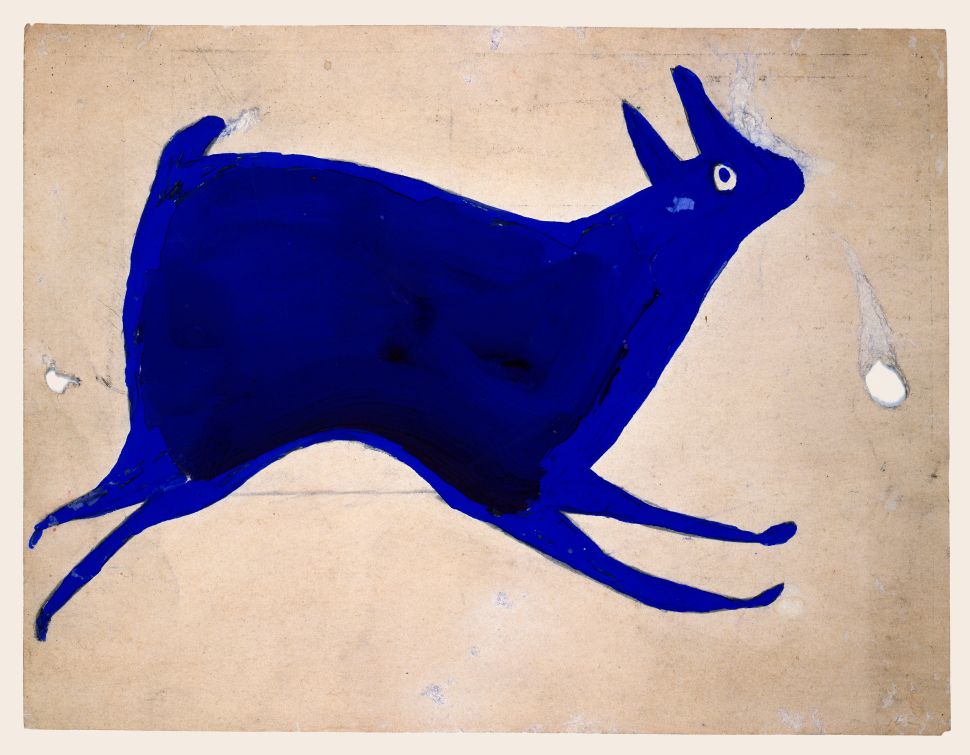