The sobering, sickening subject of child abuse in the Catholic church won an Academy Award as Best Film of 2016 for Tom McCarthy’s brilliant Spotlight, about how the Boston Globe exposed child molestation in the local Catholic diocese with shock waves that reached all the way to the Vatican. Alarmingly, the horrifying subject just won’t go away. Ace French director François Ozon tackles it again in By the Grace of God, a powerful, meticulously researched and vital film about true events that took the Catholic church in France to court and changed the future of Catholicism forever, although the verdict is still undecided.

Alexandre Guérin (beautifully played by Melvil Poupaud), a viable, respected banker in Lyon, a bastion of religion, discovers, to his alarm, that Father Bernard Preynat, the priest he believed to have been tried, convicted and defrocked for sexually abusing him from the age of 9 to 12 when he was in the Catholic Scouts, is still alive and actively teaching children in Lyon, fully sanctioned by the church and protected by the Cardinal. Alexandre, now in his 40s, with a wife and five children, has spent years trying to overcome the psychological damage and get on with a healthy life.

But the nightmares return when Father Preynat shows up in charge of innocent children. Fighting tears and embarrassment, Alexandre bites the bullet and confesses to his family to assuage his guilt and assert transparency, but the church psychologist asks him to confront the accused priest in order to hasten the healing process. Hoping for a confession, Alexandre schedules a dreaded meeting with his childhood priest, who openly admits his sins as a pedophile but refuses to do it publicly.

The psychologist fails to take further action, the church claims a statute of limitations, a friend of Alexandre’s also refuses to testify in court, fearing it will impair his marriage and invite gossip. Even Alexandre’s own mother says it happened 30 years ago, so why bring it up now? Indignant responses from devout Catholics reveal layer after layer of ignorance, hypocrisy and fear. They don’t much care if the church supports the victims, protects children and overlooks pedophilia as long as centuries of ossified religious dogma remain unchallenged.

The Cardinal is appalled at the evidence from the past, suppressed for years, and promises justice will be served and new rules will go into effect, but does nothing, while the priest accused of the felonies continues unpunished. Defeated at every turn, Alexandre resorts to one last option—he takes the charges to the press, then the criminal courts.

It’s a complex story, riddled with infinite issues, but Ozon is such a polished and fastidious director that he finds ways to keep the narrative moving and the viewer absorbed. Poupaud is a handsome and sensitive actor in the center spot, and the entire cast lends solid support. As his passion incites other victims to come forward, bond together and form an association to open up their secrets to the police, and find the courage to fight a powerful institution that has allowed the sexual abuse of children for centuries and allowed pedophile priests to commit crimes with impunity, I found myself growing impatient with so many confessions.

As the group meetings catalogue arguments about how to publicize the case in hope for a criminal trial, the movie gets repetitious. It’s so talky that reading the fast-moving subtitles takes on a challenge of its own. But this is just a small caveat in a film of such overpowering substance and value. By the Grace of God is still one of the best films of 2019.

I admire the courage it took for Ozon to address such an unpopular subject, but the outcome, according to the closing credits, remains troubling. The case progressed all the way up to Pope Francis and changed the laws about extending the statute of limitations on reporting sex abuse cases in the Catholic church in France. In March 2019, the Cardinal received a six-month prison sentence for failure to report his knowledge of the sexual abuse of children. It was suspended. In the end, Alexandre’s son asks his father, “do you still believe in God?” The question remains unanswered. 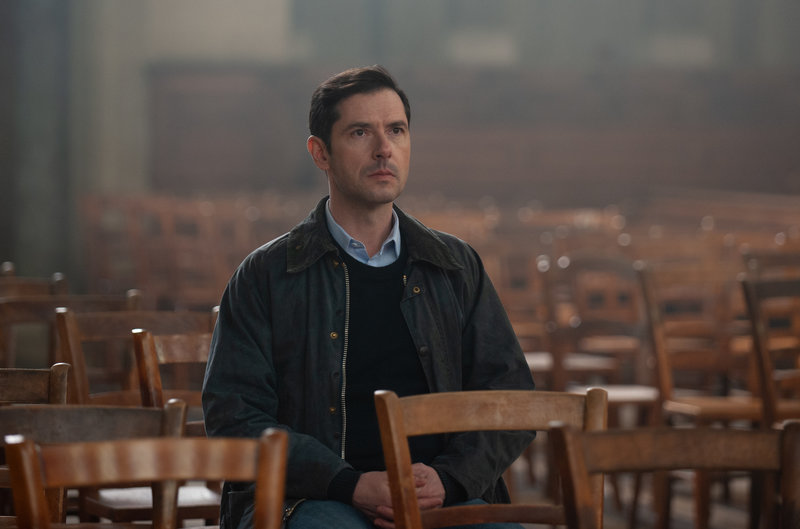