Blockchain at times can feel like a very large, very inchoate Rube Goldberg machine. The security advantages of decentralization and encryption for sensitive data are obvious, but why employ a “peer-to-peer distributed ledger” to record simple or mundane tasks unlikely to be targets of hackers or other malfeasance? Because it’s cool—or because it’s cool and it works, in the case of the blockchain-based tracking solution soon to be employed by Montevideo-based cannabis company Uruguay Can.

Blockchain has many fans in the drug policy reform world for the very simple reason that, until quite recently, blockchain was a viable technique to mask drug transactions from authorities. (It was not for the cool factor that Bitcoin was Silk Road’s coin of the realm.) Blockchain may yet be the bedrock on which solutions to the American cannabis industry’s banking woes are built (though it’s more likely that big centralized banks will start taking cannabis business accounts first).

In the meantime, blockchain’s value as a tracking tool will be tested by Aeternity, which announced on September 25 that it would be creating a blockchain-based “supply chain management platform” for Uruguay Can, which producers both medical and recreational cannabis.

In a press release, the company said blockchain would allow “the registration and tracking of cannabis strains from the seed to the final product… which ensures consumer safety while complying with regulations,” according to AeternityCEO Pablo Coirolo.

In theory, using blockchain to track a cannabis plant’s progression from seedling to cured and saleable product would make it more difficult for a bad actor to inject bad product into the supply chain, and more difficult for anyone to fudge the decentralized ledger. Thus, the end users should be more assured of the validity of the data they are receiving about the cannabis they’re consuming, particularly if they are using a device that’s on the blockchain—they are also the holder of that data, not an institution or third party.

“The ability to trace the source and the way cannabis is produced is beneficial for both the cannabis and pharmaceutical industry as well as its consumers and end users, who should feel more secure about the product that they are consuming,” Uruguay Can CEO Eduardo Blasina said in a press release.

OK, but why do this? Is it necessary, or is this just an SEO-friendly solution in search of a problem? From whom, exactly, must this data be kept safe and secure, and why isn’t the government—which has been inspecting and assuring food and drug safety—up to the task?

In the United States, several states mandate cannabis companies to track the progress of their supply chain “from seed to sale” to ensure that cannabis grown under legal protections doesn’t end up on the underground market. This doesn’t really work all that well—the black market in the United States is still colossal—but whether that’s because regulations are too strict and legal cannabis too expensive, or because it’s an impossible and unwieldy task using the wrong technology depends on who you ask and is a query outside the power of this brief item to answer.

Blockchain might do this task better, but decentralizing the data chain wouldn’t necessarily preclude unscrupulous operators from declaring a batch of product bad and destroyed when it’s really being sold off-market—that’s a job for regulators. And there has yet to be evidence of a bad cannabis company altering data to put out bad product—they just put it out.

There’s also the open question of why this is necessary for such a tiny cannabis market. Uruguay is a country about half the population of Los Angeles. Uruguay is important in the marijuana world because it became the first country in the world in 2013 to legalize recreational cannabis for adults—who can buy cannabis at licensed pharmacies—but the market remains extremely small. Small enough to track on Google Sheets, or whatever solution a mid-sized American company is employing.

The country boasts fewer than 40,000 customers. Only about 3,000 kilograms of flower have been consumed since sales began, according to official figures, although there is a nascent export market: Uruguayan companies have begun exporting medical cannabis flower to other countries. Up to 100 kilograms a month may eventually be shipped overseas from the South American nation, as Marijuana Business Daily reported.

But again, if quality and security need to be established or verified by official government inspectors anyway, and they’re not using blockchain, what is the utility of putting such data on a decentralized ledger? 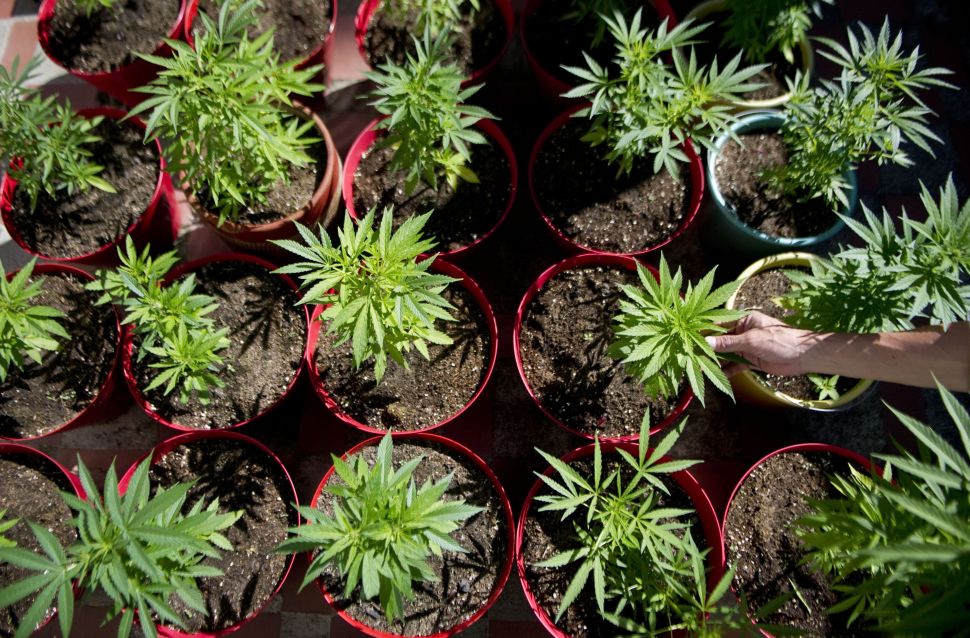