Sited at Doris C. Freedman Plaza, the public installation The Horses is comprised of three distinctive equine sculptures that stand like sentinels at the entrance to Central Park. A commission by Public Art Fund, it’s the emerging French sculptor Jean-Marie Appriou’s largest and most ambitious artwork to date.

I’m a curator at Public Art Fund, and have been thoroughly impressed and enamored by Appriou’s sculpture since I was first introduced to it in 2016. His approach appears both expressive and visionary, with a tactile and extremely physical carving process to create models that he then casts into imaginative yet strange aluminum forms through an almost alchemical transformation. The results are both formally and conceptually compelling, often with dynamic animals, flora, or figures that are as dreamlike and otherworldly as they are abstractly appealing. These sculptures display Appriou’s wide range of references and inspiration for his work. He is an artist who is as comfortable discussing pictures of animals on the internet as he is esoteric details of paintings by the late nineteenth-century Symbolists in France and the Pre-Raphaelites in England, all of which he draws from as source material to inform his uniquely imagined and unparalleled, quixotic sculptural forms.

SEE ALSO: Cranes, Psychic Pains and Bauhaus Ideals: What to Expect From This Year’s Performa 19 Biennial

Therefore, the question of how Jean-Marie would approach creating his large-scale sculptures for his first institutional exhibition in the U.S. became one of adapting his process to public space. He accomplished these ends with great aplomb and significant distinction. Rather than an equestrian statue upon an elevated pedestal (like that of Augustus Saint-Gaudens’ William Tecumseh Sherman sculpture nearby), these horses invite audiences to make their own imaginative associations and to reconsider how civic sculpture addresses its public, while also bringing us closer to the formal dynamism and psychic mystery of these majestic creatures. This month, Jean-Marie was in New York for the installation of these monumental new works. Throughout the course of his time here, we discussed the conception, installation, and reception of the three mythical beings he created.

Let’s discuss the genesis of these sculptures. What were your impressions of Doris C. Freedman Plaza as a site? What about it inspired you to create The Horses?
When I was asked to present some works at Doris C. Freedman Plaza, horses seemed immediately obvious to me. I was suddenly inspired by the “equestrian” feeling of this space, between the equestrian sculpture of General William T. Sherman, the horse-drawn carriages and their very present smell, and the entrance to the Central Park Zoo. All these energies that I could feel in this place piqued my interest in this subject and led me to propose equine sculptures.

The horse is a classic subject in the history of sculpture. It is an animal very close to humanity, and human feelings are often ascribed to it—it can serve as the vehicle for an idea or a message.

Could you describe the three sculptures that you created for the exhibition?
The three works are envisioned as a set, or a scene. I highlighted three perspectives involving the horse: the amorous horse, the warrior horse and the player horse.

Les Amants au Bois (The Lovers in the Woods) is like a movie still, a frame on legs.

Le Guerrier (The Warrior) is a portal, through which one can pass to enter the park. He is a horse in armor, yet he has the demeanor of a frightened cat. He bends his head down to meet the viewer at eye level.

Le Joueur (The Player) is supine, like a sphinx. He is resting, and his body is draped with scarves. There is a mise en abyme in the process of creation. We start from a subject, which is hollowed out as parts are produced. From a distance, the sculpture must be able to challenge the passerby. When we get closer, we discover several details: the fingerprints in the clay, the grain of the clay…. The first impulse we have when we approach the sculpture is to touch it, to understand its materiality.

We talked about the “silent majesty” of horses. How have stories such as the one about “Nietzsche’s horse” or other representations of horses in art through the ages influenced how you sculpt them?
The horse is a classic subject in the history of painting, sculpture, and cinema. Very often in sculpture, the horse is positioned on a pedestal, while also serving as the pedestal for an illustrious personage. For these works, I wanted the horse to go from object to subject, to come down from the pedestal and meet the public. Here, horses emancipate humans and directly embody feelings. They are no longer merely mounts or objects that glorify power.

My work is always related to myths and the horse in itself embodies a multitude of myths. In our imagination, it represents leisure, racing and games, but also power and war. The horse conveys all these myths and becomes paradoxically attractive and ambiguous.

You are technically very skilled at the traditional techniques and craft of sculpture and molding. Can you tell us a little more about the process of creating these works?
Everything begins in the studio, working with clay. I try to explore the material through modeling, starting from clay to build a story. When modeling horses, I sculpted the different parts of the body separately. Each part—the legs, heads, bellies—are modeled on a 1:1 scale independently of each other. Rather than modeling the entire horse, the parts are treated as separate subjects, which enables me to bring intensity to each of them.

The models in clay are then molded in silicone. From these, I make positives in composite materials. Those positives from the different parts of the horses are then assembled in the studio to create the final 1:1 scale model. This final model is then sent to the foundry where it is cast in aluminum.

This assemblage of different body parts can sometimes lead to discordant collages, but I’m not seeking to make horses in lifelike proportions. What matters to me is the intensity of the feeling—every detail must be intense; each vein, eye or hoof must be treated with emphasis.

These are huge sculptures. The largest (Le Guerrier) measures more than 15 feet tall and another, Le Joueur, is 16 feet long! It took a lot of effort and maneuvering to install them. Fortunately, we had a nice team of installers to mount the sculptures. What did you think of the process of installing these works in the plaza?
I have been to the Doris C. Freedman Plaza several times, and each time the artists’ installations are very unique, also depending on the season and the weather. The perception is different. It’s a very crowded place and also very active day and night.

We mounted the works at night, which was very impressive. The installation team was amazing, and it was very surprising to see the pieces go up so spontaneously. Early September in New York is a very special time, and I can’t wait to see the works over the different seasons until the end of August 2020.

Similarly, I also think about the tremendous efforts of the foundry I work with in France. These are the largest sculptures I have executed thus far, and they could not have been created without a very intimate collaboration with my studio and my galleries.

Now that the works are in place and we’ve inaugurated the exhibition, what do you think of how it has all come together, and what the public’s response to it will be like?
This is the first time I have been invited by an institution to have an exhibition in the United States. It is also my first exhibition in a public space. All these experiences are new; each step is a discovery for me.

Despite the monumentality of the works, I have made sure that the horses’ faces are at the same level as the viewer, so that people can interact with them. It was obvious and welcome, for example, that viewers would climb up on Le Joueur, and sit on his back.

The pieces were intended to occupy a dimension of both the poetic and the everyday: Les Amants au Bois as a sort of kiosk, Le Joueur as a sofa, and Le Guerrier as a portal. I hope that this work focusing on horses will pique the imagination of New Yorkers over the course of the year.

“Jean-Marie Appriou: The Horses” is on view at Doris C. Freedman Plaza at the entrance to Central Park through August 30, 2020. 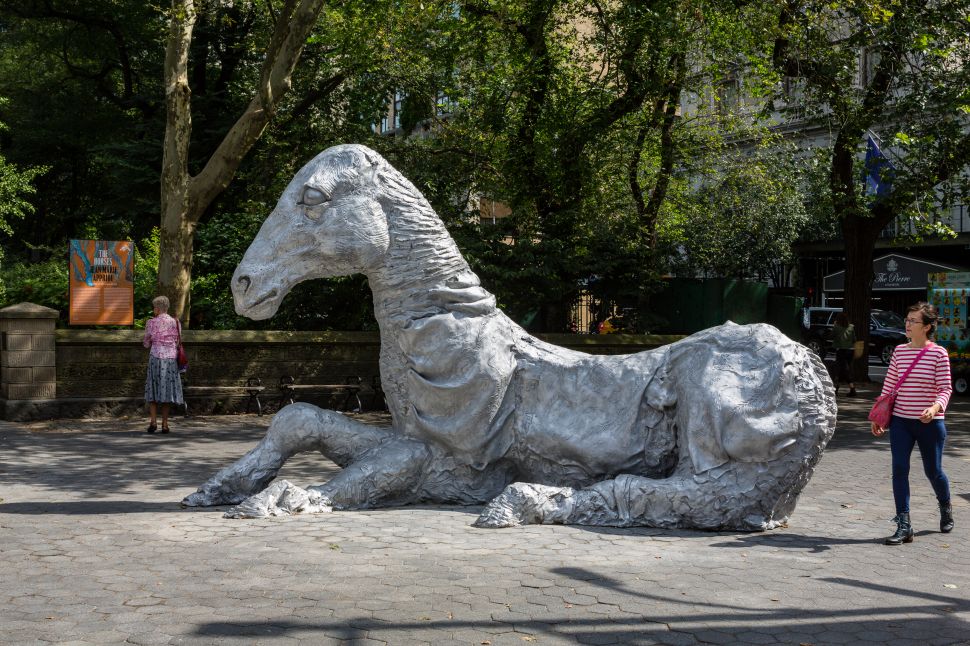