Privacy advocate/exiled whistleblower, Edward Snowden was on Joe Rogan’s podcast last week, and his takeaways on the current surveillance state of America scared the living bejeezus out of me. My reaction to his insights made me want to smash my smartphone with a rock and seek out the nearest Amish community.

Basically, we are not only willing participants in fueling a surveillance state, but we are also gleefully feeding the government all the personal info they need to use against us if we ever happen to screw up. This mass surveillance is at a level that would make the KGB put their hands together and give our government a standing ovation.

SEE ALSO: Will Photo Enhancement Lead Us Closer to Becoming a Police State?

Snowden’s appearance on Rogan’s podcast is almost three hours long, so let’s recap some of the main points he made on the current state of our surveillance state.

What is the biggest thing that has changed since 2013, when Snowden disclosed that the NSA was spying on Americans?

So, how does this play out?

Your IMEI ad IMSI are two global unique identifiers that only exist in one exact place in the world. It’s what makes your phone different from all the other phones on the planet.

“The IMEI is burned into the handset of your phone,” Snowden explained. “You can change your SIM card, but it will always be telling the network it is your particular phone.”

The IMSI is in your SIM card, and it holds your phone number. Your phone might not be doing anything, but it is constantly shouting, “I am here. Who is closest to me? That… is a cell phone tower.”

“Your going to be bound to a particular cell phone tower, and that tower is going to make a note—a permanent record—this cell phone, with this cell phone number, at this time, was connected to me,” Snowden said.

Based on your cell phone number, government agencies are generally able to get your identity. And sadly for us, Apple and Android devices aren’t champions at protecting your privacy. Big frowny face.

“What this means… whenever you are carrying a phone, whenever your phone is turned on, there is a record of your presence at that place that is made and created by companies,” Snowden explained.

But the crux of big data is that “it doesn’t need to be kept forever and there’s no good argument to keep these records forever,” said Snowden. “But companies see that as valuable information.”

Back in old timey days, all of this information used to be ephemeral—it would disappear like the morning dew—and no one would remember it.

Snowden’s point: you better not have done anything you’ve regretted in your digital past; you better not have put an unsavory term in a Google Search bar—because there will be a permanent record of that, which can be found and used against you if need be.

Snowden also pointed out that the term for this is “bulk collection,” a euphemism the government uses for mass surveillance work.

“They simply collect it all in advance and hope that one day it will become useful,” he said.

This is the whole big data problem we’re running into, and that’s just how you connect to the phone network; that’s not even mentioning all of those funs apps on your phone, which are contacting the network even more frequently.

An unrealistic solution would be to carry a burner phone so you can take the battery out; if there’s no electricity, your device isn’t sending anything. But smartphones are sealed, and you can’t take the battery out. And now the problem is, how do you know when your phone is actually off and not sending data out into the world?

“Your primary threat are these bulk collection programs,” said Snowden. “Our phones are constantly squawking to these cell phone towers because we leave our phones in a state where they are constantly on—you’re constantly connected. The central problem with smartphones today… you have no idea what the hell it’s doing.”

Take Facebook: we download the app because we want to talk to our friends and upload funny cat photos. Right? But we don’t want the app to talk to an ad or analytics server that’s monitoring our behavior.

And we don’t even know what’s happening because we can’t see it.

“There is an industry built on keeping this information invisible,” stated Snowden. “We need to make the activities of devices and apps more visible and understandable to the average person. If there was a button on your phone that said, ‘do what I want and don’t spy on me,’ you would press that button… That button does not exist right now. Google and Apple don’t allow that button to exist.”

The problem Snowden pointed out is that too many communications are happening with your phone; it needs to be simplified, there’s too much complexity. We continually read story after story about data being breached and companies spying on us, manipulating our purchases or hiding things on our timelines.

Why? Because our data became a community.

“Intentionally by design, governmental institutions and corporations realized it was in their mutual interest to conceal their data collection activities,” Snowden said.

What changed with technology is surveillance became bulk collection, and this was intentionally concealed from us. Companies, such as Facebook, will say we agreed to this. Why? Because when we opened our accounts, we clicked a 600-page legal form that stated the terms of service agreement. Who reads that? I don’t. And this agreement states it can change at any time without our consent. They have created a legal paradigm where data collected about us does not belong to us. This is how mass surveillance, from a government’s perspective, is legal.

Companies and governments are pretending they don’t understand, and from Snowden’s summation: “You can’t awaken someone who is pretending to be asleep.”

Okay, now have fun going about your day with all of your fun apps; meanwhile, I’ll be off churning some butter with my new Amish buddies. 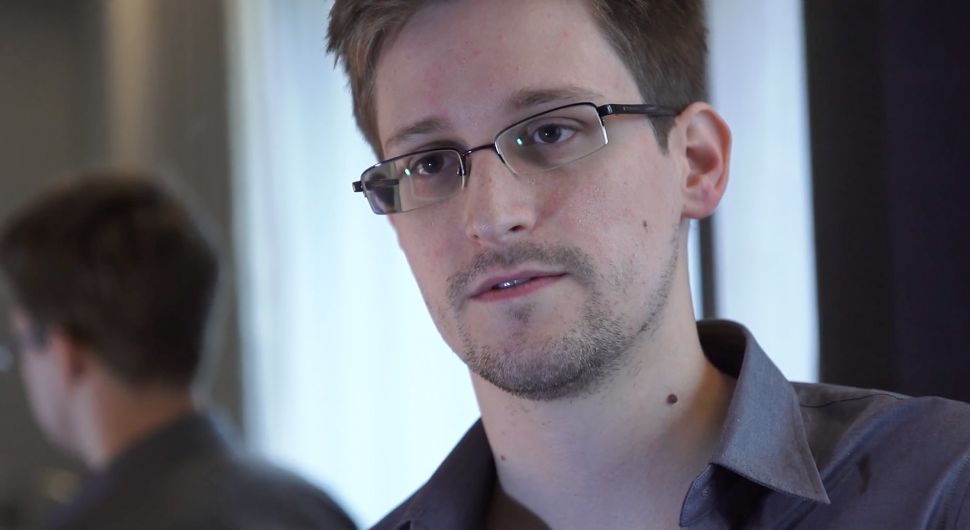