On October 29, the Metropolitan Museum of Art kicks off a new exhibition titled “Félix Vallotton: Painter of Disquiet,” which will highlight the creative output of a painter and printmaker who brought an eerily sensual understanding of crowds and bodies to his works. Vallotton, who was born in Switzerland in 1865 but spent nearly his entire life in France after moving to Paris at the age of 16, was a remarkable individualist who retained his style despite his experimentations with upward mobility.

As a young artist, Vallotton made a name for himself as a quasi-cartoonist who worked tirelessly to poke fun at the bourgeoisie. His illustrations (or caricatures) depicted intimidatingly rotund businessmen in black coats, leering predators in top hats and preposterously ruffled ladies in fancy dresses, as if Vallotton was attempting to telegraph his disgust for a group to which he did not belong. A group to which he did belong was Les Nabis or “the prophets,” a cluster of artists including Pierre Bonnard, Edouard Vuillard and Paul Sérusier, who were convinced that the way to push art forward was through symbolism, metaphor and the excavation of the soul.

SEE ALSO: ‘Art for Tibet’ Auction Expands Into an Exhibition, With Work by Shepard Fairey

Vallotton’s sensibility therefore straddled two instincts: the desire to honestly illustrate class rage and the impulse to let images diffuse into abstract emotionality. When he married a wealthy widow and became financially secure, he ditched his illustrations in favor of painting what he observed about his new lifestyle; these are the paintings that comprise the majority of the Met’s exhibition.

In a frenzy that lasted decades, Vallotton painted musical instruments, baths, showers, gusts of wind, women, poodles, department stores and illicit interactions between couples. One of his most striking works, The Lie, shows a man and a woman embracing on a red couch. She’s whispering something to him, but he’s looking away; one wonders if the lie belongs to either person individually or if it envelops them both, like lamplight in an upscale parlor. 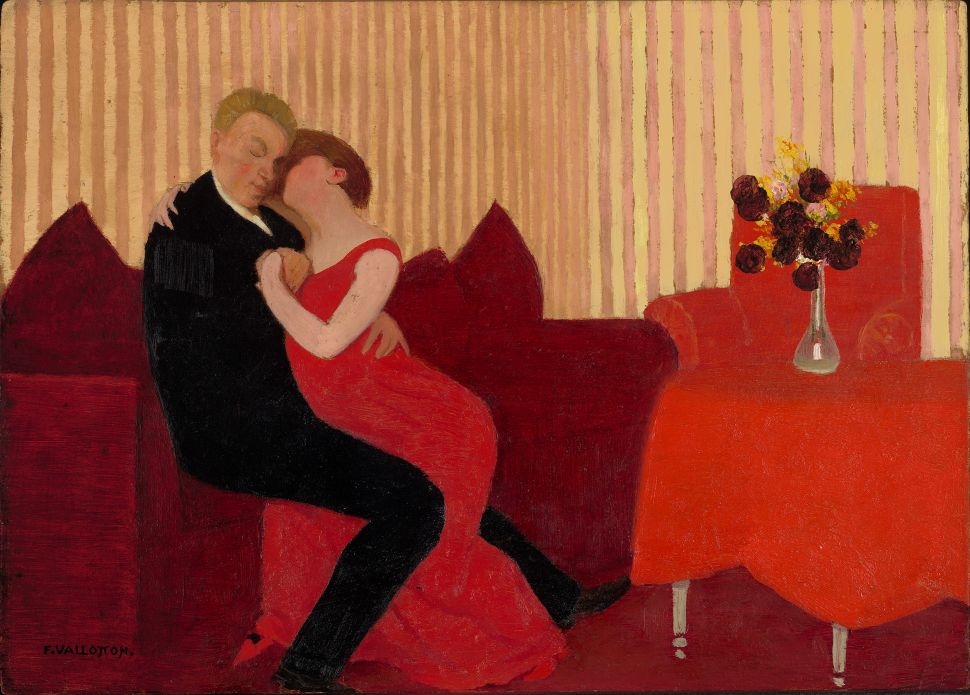