The People’s Choice Documentary Award at last September’s Toronto Film Festival went to The Cave, Syrian filmmaker Feras Fayyad’s account of hospital administrator Dr. Amani Ballour and her team of physicians working in a secret bunker two stories belowground, away from Russian missiles. The movie opens Oct. 18, at a time when the world is once again focused on Syria, as Turkey carries out a genocidal campaign against the Kurds, abandoned U.S. allies in the fight against Isis.

“Regarding the Turkish invasion supported by Russia, Iran and Trump administration, while the Russian and Syrian regimes brutally bomb Idlib in the north, and many people are killed everyday, another war begins,” Fayyad, whose mother is a Kurd, tells Observer. “I fear for the lives of civilians and the tragedy that will result from a new war. Every time Syrians feel we are close to a small hope to move on from years of war, a new war ignites. We’ve seen so much more than any human can imagine. We need to see hope and peace.”

Fayyad finds a glimmer of hope in Dr. Amani, a pediatrician who quit her postgraduate studies in Damascus and rushed to Gouta, where she once lived, to care for fellow citizens. With a staff of 140, she is the first female doctor in the history of Syria to run a hospital. To Fayyad, the only son among six sisters, she is a potent symbol of Syria’s future.

“What women are trying to do, the kind of change they’re trying to create and the kind of inspiration they provide each other and the little girls around them, it shows the toxic masculinity that controls the country,” says Fayyad, contrasting his subject with Syrian President Bashar al-Assad, a trained ophthalmologist. “Assad was a doctor himself! A doctor who uses his knowledge to kill people, compared to this woman who saves lives.”

Fayyad studied filmmaking at the international film and television school EICAR in Paris, graduating with dreams of red carpets and movie stars. That dream was put on hold when Assad declared war on his own people in 2011, quelling peaceful demonstrations with military might.

One of Fayyad’s first films was a documentary short on a dissident Syrian poet, which drew the attention of Assad’s forces resulting in the filmmaker’s arrest and 15-month imprisonment, during which time he was tortured. After his release, he escaped to Copenhagen where he currently resides.

Since then, he directed last year’s Oscar nominee, Last Men in Aleppo, about the White Helmets, volunteers who save people from bombed buildings. In doing so, he became his country’s first Oscar nominee, and voted for the first time in his life when he voted for the Oscar.

Ghouta, where The Cave takes place, is known to the West as the city where Assad unleashed a sarin/chlorine gas attack in 2013, crossing President Obama’s metaphorical “line in the sand.” “The Syrians, one of the things that they wished was the U.S. would stop Assad from killing people and the daily Russian bombs. This is my personal wish, my friends, my people, my family,” says Fayyad, noting that the lack of response in the West is believed to have emboldened Assad and his Russian allies, who have used chemical weapons against civilians on dozens of occasions since 2013.

“The last chemical attack you see in the film, as far as we know through the material, it was a mix between chlorine and a kind of nerve gas,” he says of a sequence that shows small children gasping for breath. “It’s like if you use too much ammonia, the smell is so heavy that you can’t breath,” he recalls. “Like something in the back of your throat that you can’t get out.”

Fayyad is in the U.S. temporarily, living in Westwood, promoting The Cave, which is on the Oscar track, and working piecemeal editing jobs. He had trouble entering the country under new rules put in place by the Trump administration, and plans eventually to return to Copenhagen and to Syria to shoot his next film about human rights lawyers and advocates. The red carpet has become an afterthought, if not a vehicle for carrying out his mission—creating a visual record of the atrocities his people have endured, identifying the perpetrators but most of all, celebrating the heroes.

“Those left behind face daily bombing without any protection. This is no way of hope for people,” he observes. “So, the film is a form of shouting and screaming and saying we’re here and we’re going to tell this story and sometime hope will come. Not today, but maybe tomorrow. Someday it will come.” 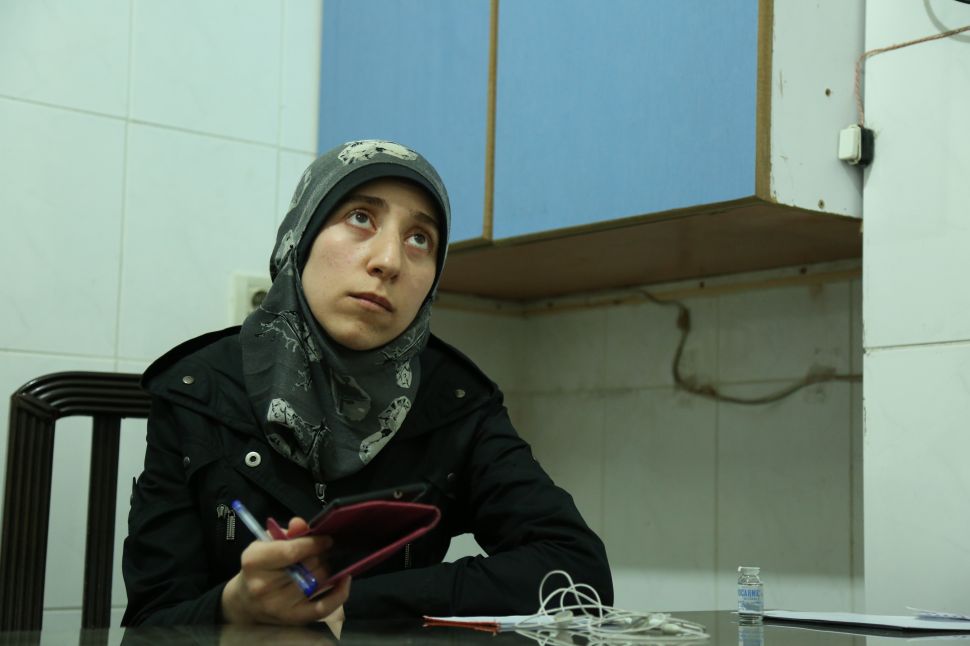