At the movies, bad things happen to good people all the time. But it’s especially lamentable to see two sterling silver talents of the caliber of Gary Oldman and Emily Mortimer trapped in a mindless trifle like Mary. It’s a watery tale of supernatural nonsense at sea as lost and immobile as a beached mackerel.

When the wreckage of an abandoned ship called Mary is found drifting aimlessly off the coast of Georgia, a struggling tour boat captain in Jacksonville, Florida becomes so intrigued by the idea of becoming the boss of his own charter vessel that he quits his job and buys it at auction. Captain David Greer (the versatile and always surprising Oldman) sees the beginning of a profitable future.

His loyal, pragmatic wife Sarah (England’s lovely Mortimer) smells bankruptcy. But despite the fact that the boat is still shrouded in the unsolved mystery of what happened to the crew that disappeared at sea without a trace, she goes along to keep peace in the family. So they pull up anchor and set sail on their maiden voyage with a younger daughter (also named Mary), teenage daughter Lindsey, her boyfriend Tommy and their first mate and best friend Mike. They should have sensed trouble ahead from one look at the masthead—a hideously distorted face with one eye missing.

An evil spirit appears from nowhere, invades everyone’s subconscious, and trouble follows as fast as an ocean squall. On the test run, Tommy attacks the captain with a knife and then hangs himself. Little Mary goes berserk and slashes her sister for no reason. Floors creak, doors lock, and the captain shrugs it off as humidity. But when Mike destroys the equipment, the boat drifts toward the Bermuda triangle and the lights go out, plunging the boat into darkness, they slowly lose their grip on reality and terror overwhelms.

Sarah finds hidden newspaper clippings about three previous voyages on Mary when passengers and crew disappeared on the open sea. The same fate now awaits everyone on the Mary except Sarah. That’s not a spoiler, because she’s in the film’s opening scene and her story unfolds in the form of a police interrogation and the rest of the film is revealed in flashbacks.

With no suspense, anemic direction by Michael Goi and a screenplay by Anthony Jaswinski that can best be described as cinematic anesthesia, it’s a downer to watch Oldman descend from winning an Oscar as Sir Winston Churchill to this tripe. Things pop out of cupboards and closets, but Mary is no scarier than a trip to the dentist. 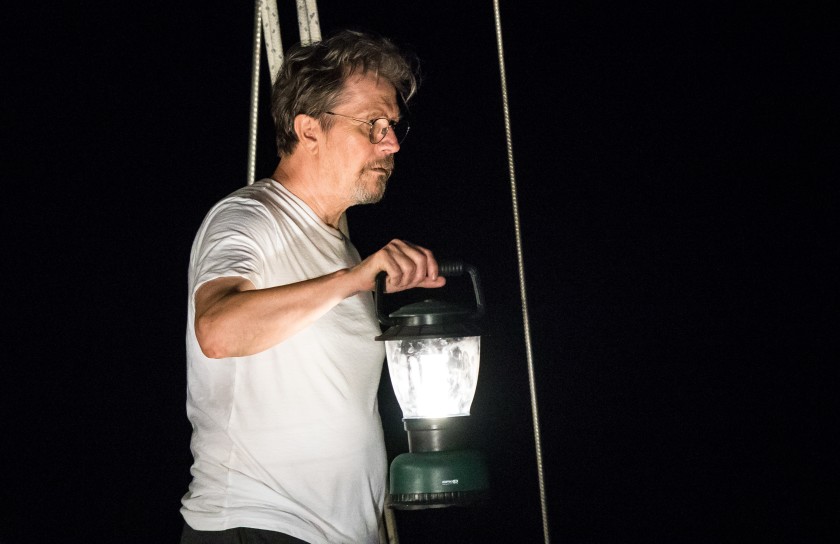