For decades, George Condo has represented a sort of big-budget art world success that’s made him both an object of jealousy and slightly acerbic derision, which sometimes makes it hard to evaluate his work clearly. A star painter who kicked off his career in the East Village and who quickly became the modern representative of Old Master techniques, Condo has recently produced a piece that’s become something of a stamp of approval for established artists: his first work of public art. The work in question, which was unveiled on Tuesday of this week in Lincoln Center Plaza in front of the Metropolitan Opera, is a 13-foot-tall sculpture called Constellation of Voices.

Lincoln Center, of course, is known the world over as an iconic hub for the dramatic arts, but painting and sculpture have always been prominent parts of the institution’s programming as well. The Metropolitan Opera House has a small gallery devoted to rotating exhibitions that sometimes have to do with the operas being performed at that time; a memorable one featured the artist Brian Calvin’s take on Così fan tutte. In 2017, Lincoln Center also celebrated the 50th anniversary of the Metropolitan Opera’s massive, beloved murals by Marc Chagall: The Triumph of Music and The Sources of Music.

SEE ALSO: How Did These Ancient Syrian Artifacts End Up at the Met? A Candid Exhibition Reveals.

Now, Condo has stepped into this artistic tradition with a golden sculpture that somehow evokes deities, lowly human performers and the anxiety of life in 2019 simultaneously. The figure, which resembles a head that’s been deformed by conflicting desires, is also pockmarked and pitted as though it’s been riddled with projectiles. There’s a distinct majesty to it too. “I took it out of the realm of gods and wanted it to echo the feeling of our time, with this idea of a constellation of voices—when so many people have taken to the streets and want to be heard,” Condo told the New York Times.

Condo’s work is often luridly cartoonish and sexual, but this aluminum and gold sculpture works for him on an earnest level that he engages with perhaps more rarely. In September, star artist Kehinde Wiley also debuted his first work of public art with a huge monument-sculpture in Times Square called Rumors of War: before the year is over, perhaps still more artists will be bringing their talents to the general public as well. 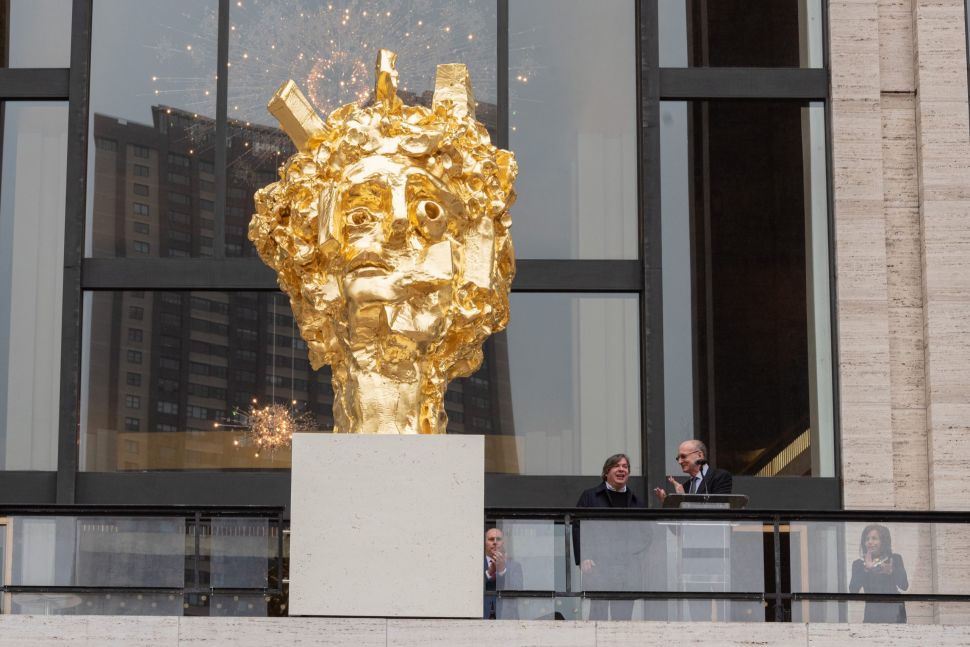