Even for a laid back city like Portland, the mood felt giddy at Thursday’s press preview for the exhibition “All Things Being Equal.” Four years in the making and the first major retrospective for the conceptual artist Hank Willis Thomas, this show unequivocally places the Portland Art Museum in Oregon on the contemporary art map. Amongst the most recognized African American artists in the world, Thomas first gained recognition in the early aughts for his work melding the language of photography and advertising to create messages critical of the exploitation of the black body in sports. Since that time, he’s expanded into other mediums while honing his near superhero-strength skills as a master aesthete and storyteller.

Naturally, Portland is excited. Show curators Julia Dolan and Sara Krajewski breathlessly informed attendees that they’d finished installing the newly commissioned monumental hanging tapestry covered in stars, 14,719, 2018, just thirty minutes before the preview. Like many ambitious exhibitions, every minute of those four years of planning was necessary. The exhibition comes with a catalogue released last year, co-published with Aperture, and will travel to Crystal Bridges Museum of American Art in Bentonville, Arkansas, and to the Cincinnati Art Museum in Cincinnati, Ohio.

But perhaps there’s more reason for all the buzz, beyond the simple fact that this is an ambitious show. Despite the city’s liberal reputation, the state has a far less than progressive history. An art exhibition that directly confronts racism doesn’t erase Oregon’s laws preventing African Americans from settling in the state (which were active for more than 80 years), but it at least suggests an openness to start new conversations. Adding to this, Portland is home to the headquarters of companies, including Nike and Adidas, that have a dominant place in Thomas’ work. “For me, Portland is the perfect place to be doing this exhibition for the first time because, in many ways, it’s the capital of advertising,” Thomas told Observer.

This observation was undoubtedly shared, as nearly hundreds of people filled a sold-out auditorium for the show’s inaugural public lecture, which included Thomas, Pacific Northwest College of Art assistant professor Derrais Carter, and Danielle McCoy and Ragen Fykes of ad agency Wieden + Kennedy. The talk added depth to the show, but it didn’t magically transform a timely exhibition that is somewhat hamstrung by a lack of curatorial vision. As I walked through the space, I was often struck by how little the exhibition did to illuminate why work reliant on pop culture trends still felt so relevant close to 20 years after its making.

That’s not to say there weren’t plenty of hits in the show. Hung over the museum’s entrance, Thomas’ neon sign LOVERULES blinks the words Love Over Rules in successive order. The piece elegantly beams out the artist’s philosophy of using love and compassion as a guiding principle in both private and public life. It’s a suiting entry to the museum, which greets visitors with the memorial piece, 14,719, a series of long vertical banners emblazoned with 14,719 stars—one for each death caused by a gunshot in 2018. The stars and stripes gently call into question a kind of patriotism that mistakes the right to bear arms for the right to kill.

After this point, though, the show’s flaws begin to tug at its successes. The exhibition’s curators group more than 90 works made over Thomas’ near twenty-year career into five thematic sections: works using racially-charged marketing, works that explore how ads shape our understanding of identity, text-based pieces, messages of solidarity and resistance, and sculpture. These groupings don’t always work.

The show’s entrance begins with metallic text that reads All Things Being Equal, which alludes to Thomas’ belief that race is a construct. Immediately following this piece hangs some of his weakest work engaging with the sports industry and branding. Over-the-top photographs of black athletes chained to a soccer ball and hung off a suspended basketball mime out the exploitation of the black athlete’s body and history of slavery in almost comically simplistic terms. The inclusion of these images takes away from the more powerful and iconic work. Branded Head, a black and white photograph of a black man’s shaved head scarred by a perfectly shaped Nike swoosh logo, imparts a similar message but with specificity and elegance. The piece is every bit as iconic as Nike’s most memorable ads, and far more subversive, so it’s a shame to see its potency diminished in the context of his less successful pursuits.

Thomas’ most memorable series, “Unbranded: Reflections in Black by Corporate America, 1968-2008,” examines the construction of race and identity in advertising starting in the year of Martin Luther King Jr.’s death and ending with the election of Barack Obama. For each year, Thomas chose a representative ad depicting African Americans and removed the text and logo. (He did the same for “Unbranded: A Century of White Women, 1915–2015,” focusing on beauty, privilege and virtue, a selection of which the curators included in this show.) Due to limited space, though, only twelve images from the series of 50 hung from the museum walls—not nearly enough to give the full impact. The chronology reveals the racial stereotypes flowing through the culture at the time the ads were made, and presents a multi-layered picture of black identity as seen through the lens of advertising. There’s no reason more of these works couldn’t have been shown—a stacked hanging rather than the sparse layout would have done the trick.

A casual observer unfamiliar with Thomas’ work probably won’t miss art they didn’t already know exists, but they won’t understand its full depth either. This problem pervades the show in more ways than just what was and wasn’t shown. We don’t get enough of the artist’s thoughts either.

In a conversation I had with the artist before the show opened, he told me his fascination with basketball star Michael Jordan lay in the athlete’s ability to transcend race through skill in a game that isn’t inherently important. “I mean, basketball is a fun and interesting game,” Thomas said. “But I don’t think it’s harder than parenting.”

Like much of what he said about the events and issues informing his work, I found this simple insight profound, but very little of it made the show. No pull quotes were used, and the curators buried statements on extended show labels that made no graphic distinction between their expert commentary, and reflections offered by kids in one of the museum’s education programs. To state the obvious, presenting didactic material this way has precisely zero benefits. It confuses audiences and erodes the authority—and eventually the pay-grade—of curators everywhere.

Avoidable missteps such as these will frustrate viewers, but ultimately the most powerful work in the show speaks for itself. In the last gallery, the five-channel video A Person Is More Important Than Anything Else, 2014, juxtaposes clips of James Baldwin speaking with other historical footage of black intellectuals and news footage of Barack Obama’s election. “It comes as a great shock that the country you have pledged allegiance to has not pledged allegiance to you,” Baldwin says. A brief look at my Twitter feed supported this assertion—images of Rudy Guiliani and his aides who were arrested for funneling foreign money into Republican election campaigns flashed across my screen. Baldwin was talking about race, but his words resonated regardless.

I suspect that when Thomas made this video, he meant the juxtaposition of Obama to offer a more optimistic perspective on what the future might hold. “In order to do anything, you have to have hope,” the artist told me.

In the context of our current political upheaval, that point of view feels harder to connect with, but there’s enough room in the piece to account for historical regression as well. Thursday night, Thomas shared a sentiment with Portland audiences I thought might offer the most clear-eyed understanding of his work’s enduring qualities. “There is no stronger power in the universe than black joy, because it has been tested and never destroyed,” he said. Looking at his work as a whole, as “All Things Being Equal” offers viewers a chance to do, a resilience shines through that no amount of repeated viewing or even flawed curation can damper. 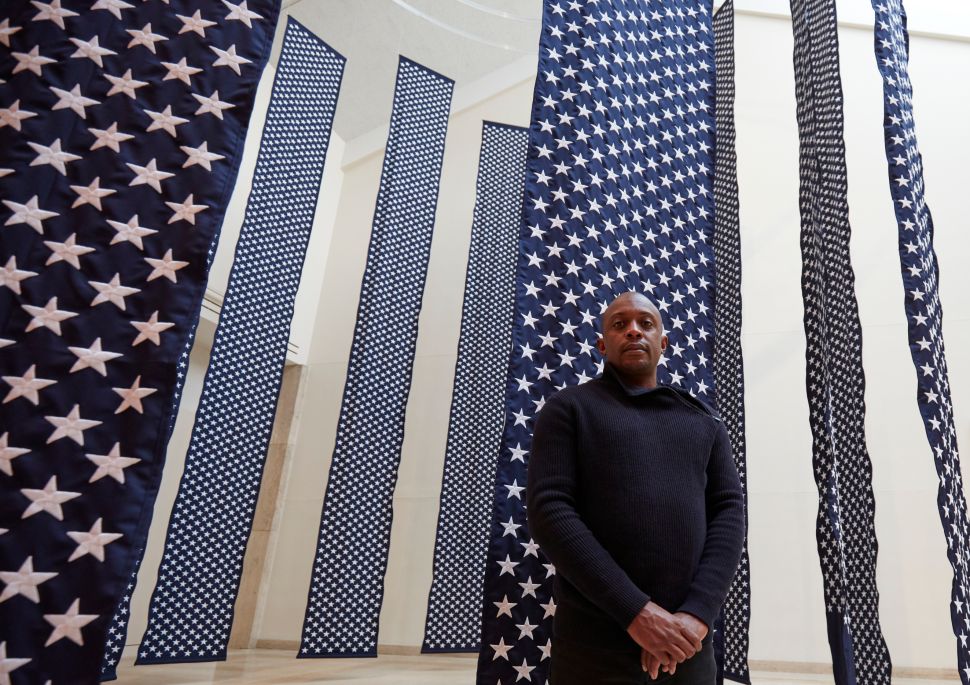