Over the weekend, at the Museum of the City of New York, the NYC Department of Cultural Affairs and Percent for Art program held a discussion that was meant to determine which artist would be chosen to create a public monument on the Central Park site where a statue of 19th century figure J. Marion Sims once stood. Often called the “father of modern gynecology,” largely for his invention of the speculum, Sims conducted experiments and surgeries without the use of anesthesia on enslaved black women.

Last week, it was announced that the finalists in the running for this commission were the artists Kehinde Wiley, Simone Leigh, Wangechi Mutu and Vinnie Bagwell, and on Saturday, a group of panelists chosen by the city voted 4 to 3 in favor of Simone Leigh’s proposed sculpture, which features a bronze figure surrounded by blue bell flowers and holly hedges. Almost immediately, it was clear that this choice didn’t go over well with activists and community members, some of whom in attendance had been working to remove the monument of Sims since 2007. At issue was the fact that the community, after careful deliberation, had concluded that Vinnie Bagwell should be awarded the commission.

“We were blindsided, because what we were allowed to see online for less than a week before the event and then at the event from Simone Leigh’s proposal was a really vague, dark outline from the front and an image with hedges in the back,” said Marina Ortiz, the founder of East Harlem Preservation. “The whole point of the event was for the artists themselves to engage with the community, and the only artist that actually came was Vinnie Bagwell.”

Bagwell’s proposed sculpture, Victory Beyond Sims, features an over 18-foot-tall “monumental angel” clutching an eternal flame in one hand and what appears to be a semi-modified rod of Asclepius in the other. It’s “the image of a warrior, a fighter, a healer, a savior,” Ortiz said. “I know that there were objections to the Christianity of it, but the artist was creative in her responses and people rightly pointed out from the audience that angels are a universal symbol not limited to Christianity.”

“I believe the city’s Percent for Art process in a way is somewhat biased for famous contemporary artists who are often more abstract,” said Todd Fine, the President of the Washington Street Advocacy Group. “The city put people in the pool who had not expressed interest in the matter,” he said.

“Where it stands is now that we, not just the committee but people who were in the room who signed a petition opposing and objecting to the decision, we’re getting together and we’re going to decide what to do,” Ortiz said. “For ten years we struggled to get the Sims statue removed, and now another statue is being imposed on this community that we didn’t choose.”

The question of who and what our American monuments speak on behalf of has been at the fore of the cultural conversation recently: just last week, Kehinde Wiley unveiled a huge public statue called Rumors of War in Times Square that’s meant to represent a direct objection to still-standing Confederate monuments all across the country. The debate over the statue that will stand where J. Marion Sims’ likeness once stood will continue this evening, at a Department of Cultural Affairs meeting at the Community Board Eleven of Manhattan.

Representatives from the New York City Department of Cultural Affairs have not yet returned Observer’s requests for comment. 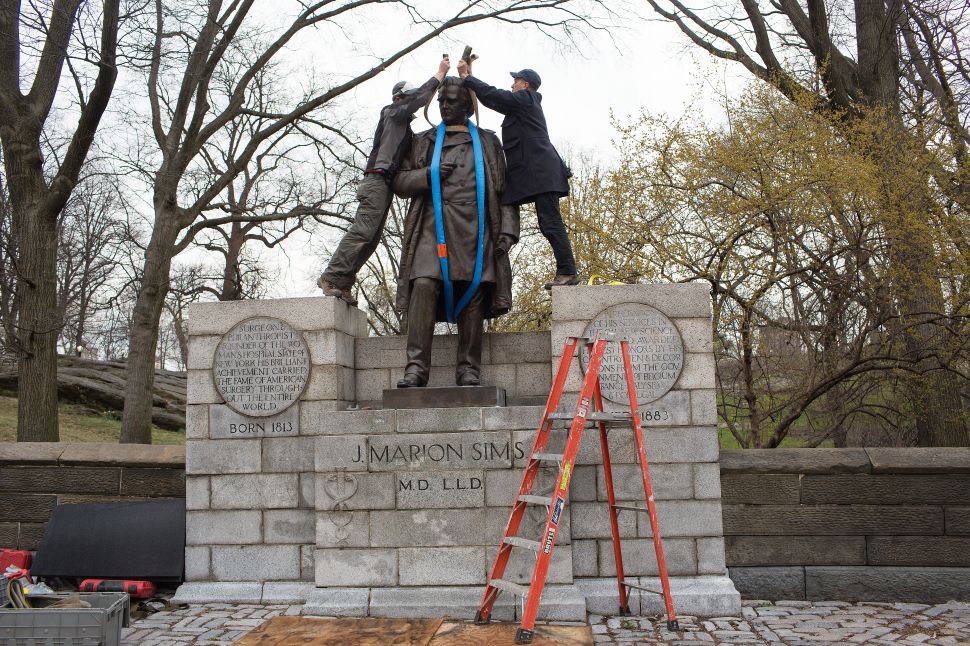