In artist Jacolby Satterwhite’s digital universe, the possibilities are immense. His decade-long practice has paid tribute to subjects as diverse as the Harlem ball scene, European art history, daytime tele-shopping, queer sexuality and African rituals, merging them into phantasmagorical fuchsia-colored dreamscapes where heaven and hell coexist. The Brooklyn artist’s intricately-crafted universe in 3-D animation, multimedia installation and digital print mixes his deeply personal ties to his mother and circle of friends with a large pool of references that are fascinating, seducing and triggering all at once.

Now, at 33, Satterwhite gets more physical than ever with two solo exhibitions that materialize his digital lexicon into three dimension. Philadelphia’s Fabric Workshop and Museum opened the artist’s first solo museum exhibition, “Room for Living,” on September 13, which represents the end of his two-year residency at the museum that resulted in a series of sculptures animating his grotesque potpourris of S&M masters, voguers, biomorphic machines, Brutalist interiors and washes of neon colors.

Up to this point, Satterwhite has probably been best known for his video work, like the 2019 visual album by Solange When I Get Home, for which he was a contributing director, or his Reifying Desire video series that was included in the 2014 Whitney Biennial. But for his latest shows, the artist is taking a more tactile approach.

“I treat my own sets of storyboards [for video works] like exquisite corpses in which I can orchestrate different spaces, and I realized the same happens with sculpture,” told Satterwhite to Observer during preparations for his other solo show, “You’re at home,” which opens at Brooklyn’s Pioneer Works on October 4. “Placing aesthetic objects in the middle of a space or digital platform are both about the narratives between them.”

At the Fabric Workshop and Museum, the process started with long conversations between the artist and the museum team. “We were driven by the idea of stilling some of Jacolby’s videos and make the virtual real,” explained exhibition curator Karen Patterson to Observer, adding that this was a learning process of different textures and forms for everyone.

Recreating Satterwhite’s non-linear motifs condensed into striking visuals in sculpture was a challenge they resolved by determining the materials—such as silicone, enamel, foam and resin—that do justice both to digital and real worlds. The curator breaks down the distinction between two worlds into two separate floors: his figures dancing or mingling in ecstasy come into life on lower floor and his animations that inspire the sculptures on the upper. As much as referencing to queer club scene and Black experience, the sculptures pay direct homage to western art history, including a large-scale interpretation of Caravaggio’s The Incredulity of Saint Thomas, rendered here in foam within four larger-than-life nude Black men donning do-rags and reenacting the painting’s poking gesture. In Room for Cleansing, Picasso’s Les Desmoiselles D’Avignon returns in the form of five suggestive topless women with a backdrop of a neon text declaring: “a watertub sent to soak in.” The handwriting and the tub they pose in are designed by no other than Satterwhite’s late mother, Patricia.

In fact, this show and “You’re at home” are imbued with traces from the artist’s mother, who suffered from schizophrenia and found solace in drawing and recording music. Her drawings, which Satterwhite describes as the “genesis of my creative mind,” serve as sketches for the majority of the sculptures on view at both institutions. About lasting influence of his mother’s drawings in his own practice, the artist says: “Power in those drawings helped me as a person and artist, and now they act as gesso to my work, the primal layer.”

At Pioneer Works, an unabashed “cacophony” of sounds and images take center stage, including wallpaper, blackbox theater, cabinets and 3-D renderings of Satterwhite’s mother’s drawings, centered around the immersive animation Birds in Paradise. A true testimony to the artist’s transgressive visual vocabulary, this psychedelic rave—something of a second coming of Hieronymus Bosch’s The Garden of Earthly Delights at a near future gay club—salutes the artist’s usual key visuals about desire, performance, authority and consumption. Amidst gliding S&M soldiers and splashes of hues that mimic factory-like interiors, pay attention to drone-shot real footages of forest fires and melting glaciers.

This techno dance between utopia and dystopia is soundtracked by the artist’s mother, whose aspirational recordings of a cappella over cassette tapes are mixed into a double LP album, Love Will Find A Way Home, made in collaboration with musician Nick Weiss and with a cover shot by Wolfgang Tillmans. Since forming the band PAT, Weiss and the artist have been collaging Patricia’s voice into abstract dance rhythms that set the tone for son Satterwhite’s moving imagery. A melancholia- and hope-infused voice both contrasts and elevates the works’ captivating visuals and paces their rhythm. Visualizing music is in fact a practice Satterwhite recently experienced at grand scale in his collaboration with Solange. The artist worked on the music video of “Sound of Rain,” adapting his signature fluid moves to Solange’s mellow beats. “My mom was trying to make a pop record 20 years ago,” the artist says. “I’d like to pay homage to unsung Black heroes of techno music from my own experience. This is a powerful record.” 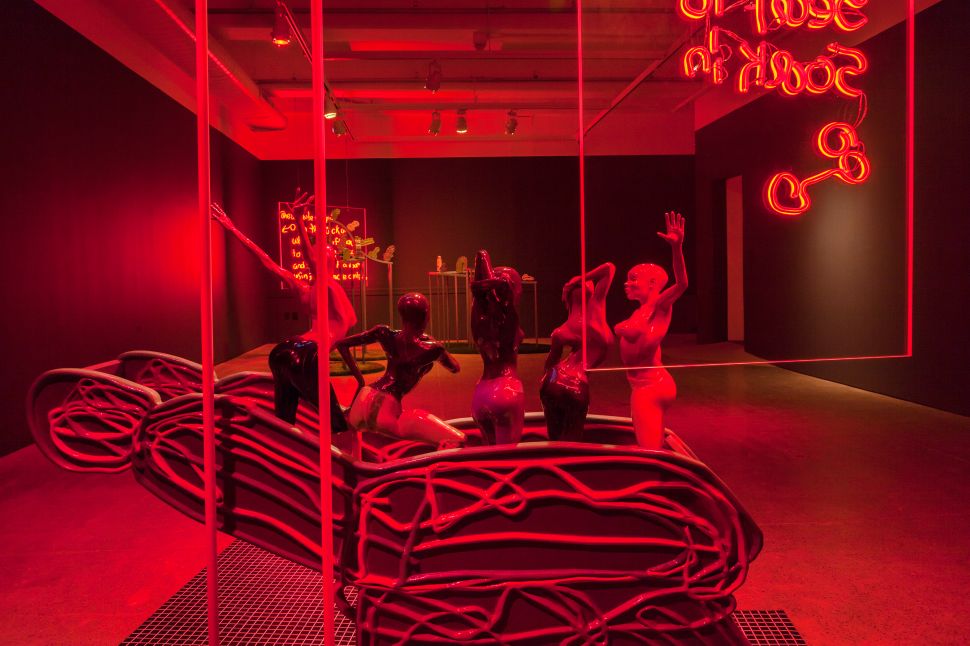