In spite of the fact that both Jack Benny and Mel Brooks got there first, eccentric New Zealand writer-director Taika Waititi thinks he’s breaking taboos by invading the consummately evil facade of German fascism in World War II in the style of satire to tell a coming-of-age story about a 10-year-old boy who idolizes Adolf Hitler so much he makes him an imaginary best friend. The movie is called Jojo Rabbit and its purpose is to present a microcosm of war perceived through the eyes of a child. It’s a well-meaning idea that never quite succeeds on the levels of either comedy or drama. Call it a noble failure.

Johannes Betzler (Roman Griffin Davis), brought up on a diet of lies and sordid propaganda, has an overpowering desire to be a Nazi warrior. At a Nazi boot camp run by a disgraced army officer played for campy laughs by an exaggerated Sam Rockwell, the boys are taught how to throw grenades, the girls learn the importance of getting pregnant for the Fatherland, and everyone burns books for fun.

Humiliated, taunted, and labeled a coward because he has no stomach for violence, the boy is nicknamed Jojo Rabbit for refusing to break the neck of an innocent bunny. His misery is exacerbated when he discovers his mother Rosie (Scarlett Johansson) is working for the resistance and is secretly hiding a Jewish girl named Elsa (Thomasin McKenzie) in the attic.

As the war progresses and Germany collapses, Jojo’s friendship with Elsa, who teaches him he’s been wrong about anti-semitism, and the new values shared by Rosie, who has for years successfully hidden her hatred of the Third Reich from friends, neighbors and her own son, finally convince him he’s been living in a misguided web of deceit. As the swastikas come down from the flagpoles and the American stars and stripes go up in their place, Jojo’s best friend Yorki (a rotund, bespectacled mushroom of an actor, Archie Yates) convinces him there are worse things to fear than the Jews—namely the approaching Russians, who reportedly eat live babies. “Definitely not a good time to be a Nazi,” says Yorki.

Unfortunately, the movie never rises to its fullest potential. The Nazis are comic strip characters. The men in the film have all been recruited to provide comic relief, including director Waititi, whose constant interruptions as the Führer are more annoying than amusing. His impersonation of a silly, flaccid Hitler (who, in reality, was anything but) shows no particular style, and neither does his direction.

The dialogue only succeeds in slowing down the pace, and one hour and 48 minutes is too long to wait for a naive child to develop some empathy for the rest of the human race. The result, in my opinion, is an uneven Jojo Rabbit that is too frivolous to take seriously, less controversial than advertised, and not original or profound enough to make a fresh emotional impact. 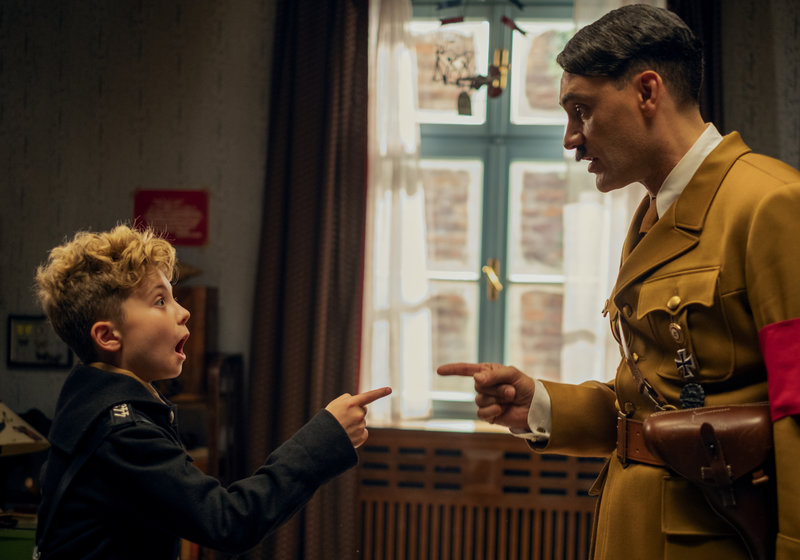