People love him. More importantly, they hate that they love him.

He’s the Clown Prince of Crime—a violent, psychopathic, anarchistic, sociopath with delusions of grandeur. He’s a failed stand-up comedian driven mad by a society that carelessly discards him. Or, is he a gangster seeking revenge for the perceived slights life has flung his way? Maybe he’s an immortal being navigating the eons with unhinged grace and aplomb.

The Joker inevitably arrives in any number of incarnations but the one constant is the character’s lasting endurance. Like Travis Bickle or Tyler Durden, he has proven to be an oddly popular—even beloved—pop culture representation of certain ideologies. With the release of Warner Bros.’ Joker this weekend, the modern blockbuster era will have featured an unbelievable four Oscar nominees in the role. Each iteration of the character has been steeped in a different psychology, presenting audiences with a multi-faceted profile of the most infamous villain of contemporary literature. Here, we dive into their characterizations and motivations to find out what makes them tick and why we’re so enamored with them all. 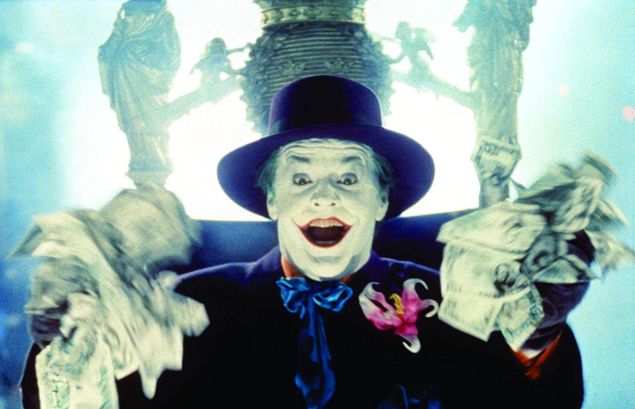 Jack Nicholson’s Joker from Tim Burton’s 1989 classic possesses many fibers of familiarity—the sadistic sense of humor, the public eccentricities, the visual motif. Yet the mirror image cracks when the lens is held up to their motivations, which isn’t inherently wrong or bad, just different. The Joker of the comics is largely driven by ideological and philosophical reasons rather than money or understandable ambitions. Nicholson’s Joker—while motivated by an inflated sense of self, overactive ego, and specialized narcissism—is a gangster at heart.

Outside of Joaquin Phoenix’s Arthur Fleck, Nicholson’s creation is the only big-screen Joker on the list with a reliable origin story. Before he was the Jester of Genocide, he was Jack Napier, a low-level thug who felt humiliated by Gotham crime lord Carl Grissom. Out of that sense of victimization grew a strong desire for retaliation—“Jack is dead…call me Joker,” he tells Grissom before killing him—and a lust for power and money as means of self-validation.

This Joker still needs to be the center of attention, drawing an audience for his grand gestures of terror. His flamboyant attacks still carry an undercurrent of ideological messaging, such as defacing art at the Gotham Museum and dispersing cash to parade crowds while unleashing Smylex gas. If film is simply metaphor checkered with symbolism, Burton certainly gets his point across. But, ultimately Nicholson’s version uses violence as a response and solution to most situations in order to maintain power like a classic gangster villain.

Heath Ledger’s Oscar-winning Joker is widely considered the definitive take on the character. The Dark Knight‘s antagonist is a fully formed anarchist with specific designs against Gotham’s power structures. The character even verbalizes this just to make sure his point of view comes across crystal clear.

“Introduce a little anarchy, upset the established order and everything becomes chaos. I’m an agent of chaos,” he tells Harvey Dent.

This closely aligns with philosopher Thomas Hobbes’ ideas of human nature expressed throughout his book Leviathan. Hobbes believed that humanity was inherently flawed and corrupt and that the only check against our innate destructiveness was the loose illusion of societal norms supported by strong authoritarian enforcement. The reason we don’t all steal and murder, according to him, is because there are opposing forces in place that would punish us if we did. Strip those away and our true nature is revealed.

The Joker’s entire plan revolved around this perceived truth. His intention was to actualize it both literally and symbolically by deconstructing the protections in place. The physical manifestation of his designs of disorder was meant to be the destruction of at least one ferry boat when vessels ferrying prisoners and civilians were pitted against one another in a twisted social experiment. This did not come to pass as director Christopher Nolan opted for a more optimistic view of humanity. However, the Joker was successful in driving Dent, Gotham’s ethically steadfast district attorney, to violent madness, thus presenting a powerful symbol that Batman and Commissioner Gordon were forced to cover up. 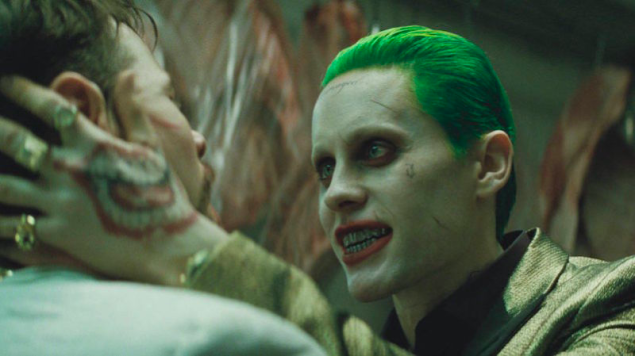 Jared Leto’s version of the character is the least popular among the group, though Warner Bros. did him no favors by heavily editing his role in Suicide Squad. Had director David Ayer’s original interpretation of the character been given the full greenlight, it’s possible that his brash, in-your-face antics would have been better received. As it stands, the Suicide Squad edition comes across as an uninteresting psychopath.

He’s prone to impulsive violence, rather than targeted and calculated measures, and elicits a visible thrill from psychological games. His delusions envelop those around him (see: Margot Robbie’s Harley Quinn) despite his near-complete lack of empathy. Leto, while speaking to Entertainment Weekly, argued that his character exists “in between reality and another plane.”

“It’s probably better to not get into it but to the Joker, violence is a symphony. This is someone who gets an extreme reward from the act of violence and manipulation. Those are the songs he sings and he is very in tune with what makes people tick. I did meet with people that were experts, doctors, psychiatrists that dealt with psychopaths and people who had committed horrendous crimes, and then I spent some time with those people themselves, people who have been institutionalized for great periods of time.”

All of the cinematic Jokers are sadistic, but there usually exists some measure of meticulous control. Leto’s Joker, however, feeds more off of his immediate emotions while exhibiting a distinct disinhibition. 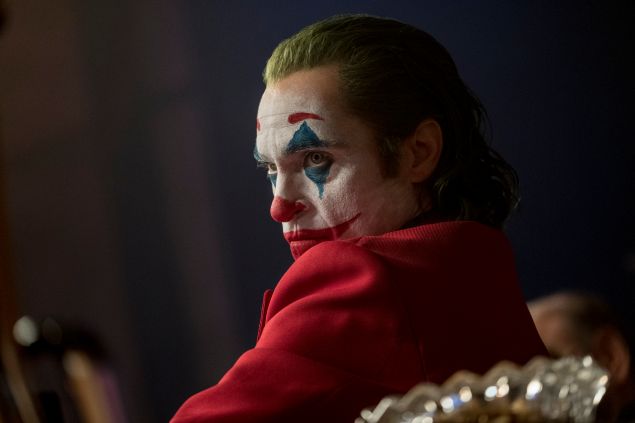 Todd Phillips and Joaquin Phoenix’s controversial Joker, which features the best performance of the year thanks to the actor’s dysmorphic totality, strays closest to one of the character’s beloved origin stories, Batman: The Killing Joke.

“All it takes is one bad day,” the Joker says in the comic, suggesting that we’re all just one traumatic event away from madness. In that sense, Joker shares a strand of DNA with Michael Douglas’ 1993 crime drama Falling Down, in which a mild mannered, out-of-work man violently lashes out against a society that he believes has discarded him. That’s frighteningly similar to the descent into senility undergone by Phoenix’s Arthur Fleck, though Joker also seems disconcertingly eager to lay the blame on mental illness.

Both depictions adhere to psychoanalyst Carl Jung’s Shadow phenomenon, which he defines as a realm of the psyche in which an individual’s unacknowledged negative impulses are compounded until they become an active influence on our behavior. In order to maintain mental equilibrium, we all must admit to ourselves that we occasionally want to steal a burger from the cafeteria or rough up the obnoxious drunk guy at the bar. We must be self-aware enough to recognize our own “negative thoughts.” If we don’t, our cognitive patterns shatter. Observing the Joker’s antics in all his iterations allows us a vicarious indulgence of our dark side.

“Projection is one of the commonest psychic phenomena…Everything that is unconscious in ourselves we discover in our neighbor, and we treat him accordingly,” Jung wrote in Archaic Man. Essentially, our minds make us the hero of our own stories so that our perceived victimization is hoisted up as a justification for bad behavior.

“You can either say here’s somebody who, like everybody, needed to be heard and understood and to have a voice,” Phoenix said of his character in a recent interview. “Or you can say this is somebody that disproportionately needs a large quantity of people to be fixated on him. His satisfaction comes as he stands in amongst the madness.”

If Nicholson’s Joker is a gangster, Ledger’s is an anarchist, and Leto’s is a psychopath, then Phoenix’s Joker is surely a cautionary tale. 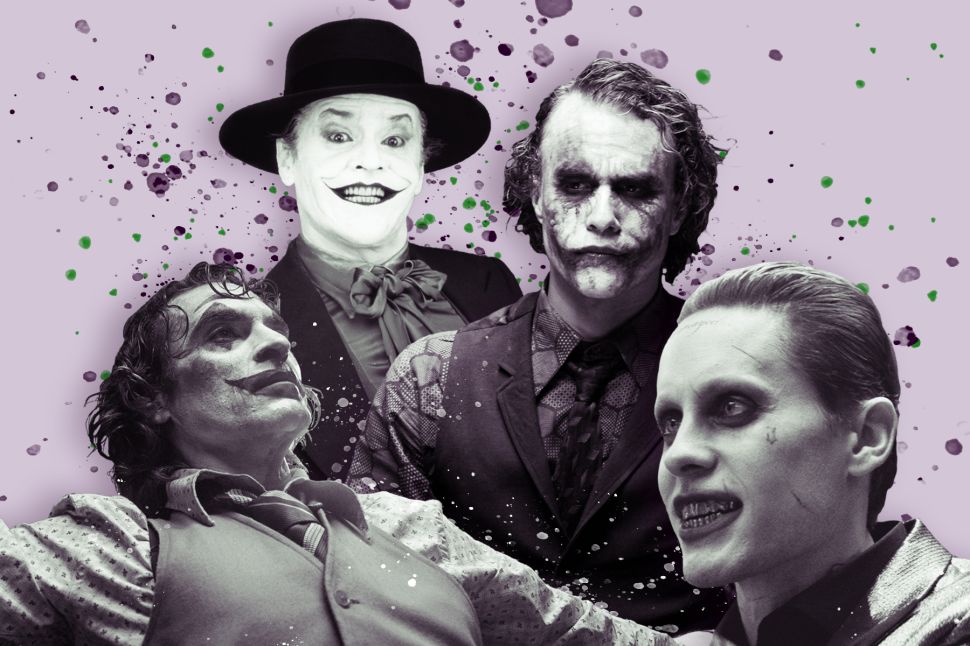