All across the country, justified debates are raging about monuments, public art and what these statues represent to our fluctuating culture at large. These conversations are understandably weighed down with incredible significance and irrefutable seriousness, but it was a welcome delight to see that public works can also be a source of humor, when, this past weekend, a new sculpture sprung up in Battery Park poking fun at a little nugget of NYC history.

Made by Staten Island artist Joe Reginella, the work depicts an unfortunate tourist being set upon by wolves wearing such ferocious and almost gleeful expressions they could have been plucked from the mind of Walt Disney himself.

“Dedicated to the many tourists that go missing every year in New York City,” the monument’s plaque reads. “And a reminder as to why the parks close at dusk. Erected by the Ed Koch Wolf Foundation and the NYC Fellowship.”

Of course, there aren’t bloodthirsty packs of sightseer-hunting wolves roaming the five boroughs every night, snatching innocents off the streets and gobbling them whole, but former NYC mayor Ed Koch did notoriously suggest using wolves as a preventative measure against prolific graffiti artists back in the 1980s.

The sculpture is currently back in Reginella’s studio but it will be erected again in Battery Park this weekend on Saturday or Sunday (weather permitting). Over the next couple of weeks, according to Untapped Cities, the sculpture is also set to be stationed in Washington Square Park, Staten Island and in Brooklyn Bridge Park.

In the past, Reginella has made sculptures commemorating the “Staten Island Ferry Octopus Disaster,” the “Brooklyn Bridge Elephant Stampede” and the “NYC UFO Tugboat Abduction,” all of which skillfully combine the aesthetics of myth and urban legend to inject a bit of silliness into the fabric of civic history.

“Ed Koch owns a piece of my art,” Reginella told Observer on Thursday, speaking not only as a member of the general public but someone who has had one-on-one contact with the politician. After Reginella debuted his bronze statue of Giuliani that turned that former mayor (and current Trump flack) into a monster, “[Koch] sent me a letter and he said, ‘you really captured his spirit.'” 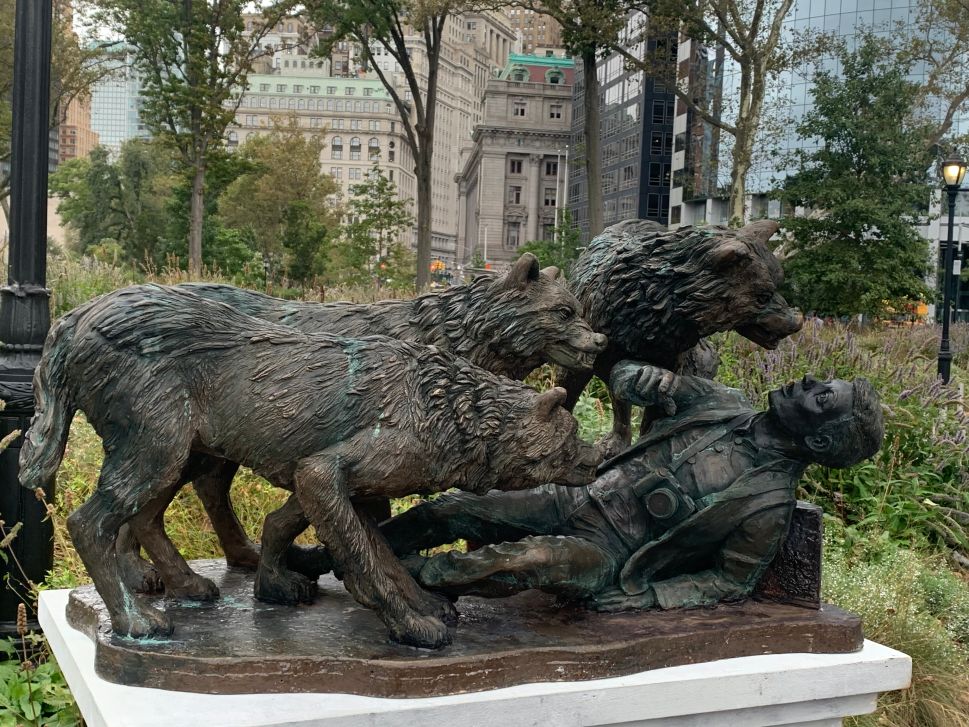