Not all superheroes wear capes. Some dress in high heels, higher hair and short skirts.

Ask Katori Hall, 38, author of the book for Tina: The Tina Turner Musical, which launches previews tonight at the Lunt-Fontanne Theatre on Broadway. Proof that Hall believes the rock goddess has superpowers is tucked into a telling stage direction about Turner on page one of her script. “As if with the flick of her wrist,” it reads, “this creature can stop time.”

SEE ALSO: Tammy Blanchard Always Aspired to Take on the Challenge of Audrey in ‘Little Shop of Horrors’

Hall, who like her show’s “she-ro” (her term), hails from Tennessee, swears it’s true. “I was 3 or 4,” Hall tells Observer. “That’s when I saw the ‘What’s Love Got to Do With It’ video. Number one, it was a black woman on TV who was strutting, with really long legs, down a sidewalk of New York. Growing up, I was surrounded by fabulous black women—and Tina was a reflection of them. She just felt so otherworldly but also of the world that I knew. That was when she stopped time for me.”

Three-and-a-half decades later, Hall, like Turner, has confronted her share of racism, sexism and other issues. Those experiences inform her plays, from the blues-infused Hoodoo Love, the Rwanda-set drama, Our Lady of Kibeho, and the surreal fantasy, The Mountaintop, an Olivier Award-winner about Martin Luther King Jr.’s last hours.

When it comes to telling Turner’s tumultuous and triumphant tale, Hall, who rewrote a script by Kees Prins and Frank Ketelaar, says: “I was born to lay my hands on her story.”

Director Phyllida Lloyd, who’s guided Mamma Mia! and The Iron Lady, concurs. “The decision to bring a writer from the South who understood Tina’s early world has been fundamental to the project and [Katori] has given us a robustness we could not otherwise have gained.”

And it’s not always a pretty narrative, as anyone with even a passing knowledge of the life of the 79-year-old Turner would know—it’s chronicled in her memoir I, Tina and the Oscar-nominated movie What’s Love Got to Do With It. Beyond her hit songs—“What’s Love Got to Do With It,” “Rag Doll,” “Proud Mary” and “River Deep—Mountain High,” among them—she also is a face of domestic abuse at the hands of husband Ike Turner. The music business also brought more battles.

All that, along with uplifting facets of Turner’s Buddhist faith, will be on stage in the show officially opening Nov. 7. “It’s the whole enchilada,” says Hall. “Tina has lived her life like an open book.” (And written one about it.) “Still, when she and I sat down to talk with her,” Hall adds, “she wondered if people will be able to sit in the theater and see her truth and not be made uncomfortable. I was like, ‘I think it’s good to be made uncomfortable. What you went through is traumatic.’

“I know there’s this assumption that a biomusical has ingredients—the highs and the lows—automatically baked into them,” Hall continues. “But when you look at the actual story of Tina, the lows and the highs are more extreme than other stories I’ve witnessed on the Great White Way.”

Hall’s work on the project is enriched by deep research including the contents of Turner’s memoir, interviews on YouTube and, most essentially, first-hand one-on-ones with the star. Those talks illuminated a “still complicated relationship with her mother,” says Hall. Meanwhile, Turner’s concerts added jolts of creative juice. Hall recalled concert moments, “where Tina created a presence that felt like a tornado whipping through the world, with her dancing, her costuming, her energy. Women can be wild and wonderful. All eyes can be on you and you don’t have to kowtow to any male presence. She was unapologetic.” The template Turner forged, Hall adds, was one that served the likes of Beyoncé, Rihanna, Katy Perry and others.

Hall believes that the time now is right for a show about Turner, who is played by Adrienne Warren (Bring It On, Shuffle Along), who reprises her role from the show’s London run. “Adrienne dances her face off and sings and acts her ass off,” says Hall.

“In my opinion, it’s always a perfect time for Tina Turner,” adds Hall, whose older sister is named after the star. “But we are in a moment where women are really standing in their power and speaking up about all kinds of traumatic experiences, whether it’s Harvey Weinstein or R. Kelly. Women are finally being heard.”

She speaks for herself. “On Broadway, the number of women who get the opportunity to be the book writer of a musical are minimal.” Currently she’s in a group that includes Dominique Morisseau, author of the currently running Ain’t Too Proud, and two-time Pulitzer Prize winner Lynn Nottage, who’s writing the upcoming Michael Jackson musical MJ.

“We know each other. We support each other. I’m so psyched about that,” Hall tells Observer. “We haven’t had a breaking bread moment, but it’s an amazing thing. I believe that all of us would agree that while it’s great that there are three of us, we want it to be 30 and more.”

The playwright is braced for reactions to yet another jukebox biomusical, following ones about Donna Summer and Cher that each lasted less than a year. “I could care less about other people’s expectations,” she says. “[They are] musicals about women and those shows should be done. People thumb their noses at jukebox musicals, but when they’re good, they’re good.”

One thing that could make good even better: The “she-ro” herself in the house on opening night. Will it happen? “We shall see,” says Hall. “Fingers crossed.” 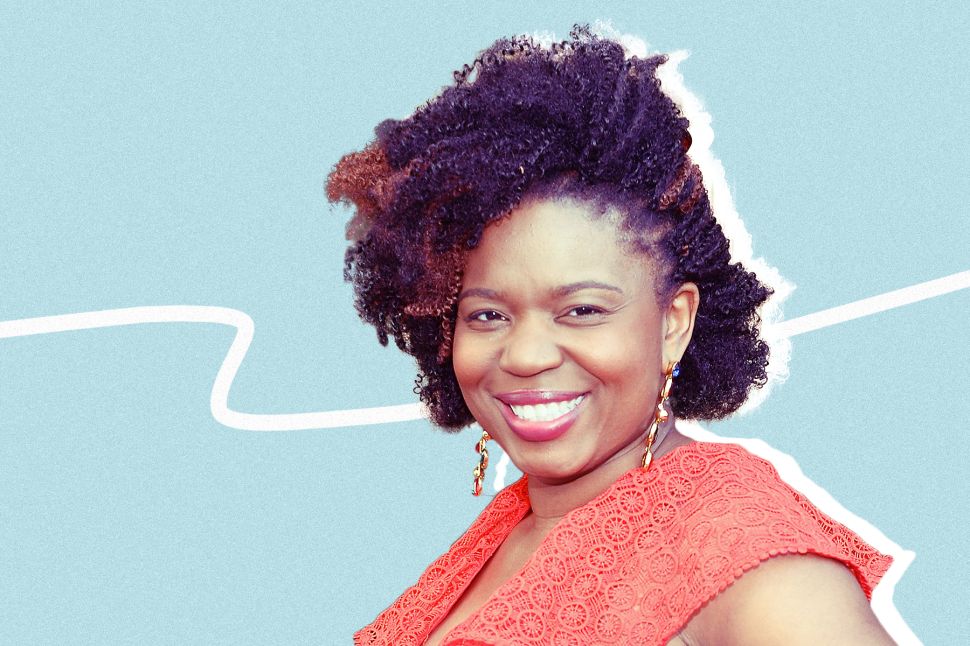