The most interesting new play in New York now is not on Broadway at all, but in the small, innovational, sometimes experimental Irish Repertory Theatre on West 22nd Street. Despite the terrible title Kingfishers Catch Fire (from a sonnet by Gerard Manley Hopkins nobody will remember), it is a thoughtful, provocative play based on a true story following WWII, when Monsignor Hugh O’Flaherty, an Irish Catholic priest stationed in the Vatican, became a regular visitor (and unlikely friend) of Lieutenant Colonel Herbert Kappler, the notorious head of the gestapo in Italy who was sentenced to life without parole for war crimes.

SEE ALSO: Broadway’s ‘The Height of the Storm’ Is Enigmatic Gibberish

The priest, who helped 6,500 allied servicemen and Jews escape death during the German occupation of Rome, and the nazi fiend, who ordered the execution of 335 citizens in retaliation for the deaths of 33 Germans killed by the resistance, were an unlikely pair, but that’s what makes the play, about their cautious but growing postwar relationship, so riveting.

Well written by Robin Glendinning and carefully, economically directed by Kent Paul on a stage the size of a broom closet, it had a profound effect the night I saw it on an audience that was visibly moved. During his trial, Kappler refused to admit guilt or express remorse, and Father O’Flaherty had his work cut out for him from the first minute he arrived in the filthy, claustrophobic cell (creepily designed by Edward Morris) in the sixth-century castle converted to a prison on the western coast of Italy. (A real place that lured tourists after the war.)

In the pretense of humanitarian inquiry (Is the government treating its nazi prisoner fairly? Is it too cold in the cell? Is the food adequate?), the priest is insulted and derided but as the visits progress, it becomes clear that the Monsignor couldn’t care less if the toilet works. The questions raised and the issues debated that address ethics and morality are cogent and fascinating. But both men have reasons for shame. They claim they were following orders and answerable to a higher power—the nazi to the Führer, the priest to God. But in the debate between good and evil, retribution and guilt collide and each of the two men gives the other new and challenging reasons to question the meaning of life, death and the hereafter.

Arrogant and unrepentant, the nazi insists he was just as much a victim of war as the Jews and as a devout atheist, he has no interest in the priest or his religious definitions of right and wrong.  He’s a pessimist who scoffs at the idea of a new democracy on the Rhine. He knows the Germans face eternal damnation, but adds the Pope did nothing to help the Jews either. In fact, he argues, there is no evidence that God has ever intervened to change the course of history.

The priest counters that in every historic war, there were acts of mercy, humanity and morality. But not, counters Kappler, by God. And the priest begins to wonder if Hitler’s soldiers were any worse than the pilot who dropped the bomb on Hiroshima that killed 300,000 innocent people. He was following orders, too.

This is grim and serious fodder for an uncommonly sobering theatrical experience, well served by two actors who keep you on the edge of your seat—Sean Gormley as a cool, dignified emissary of God under stress, and the smashing Haskell King as the most complex and galvanizing nazi since Helmut Dantine in Mrs. Miniver.

O’Flaherty miraculously converted Kappler to Catholicism before he escaped from prison, smuggled by his wife in a suitcase in 1977, and King is so charismatic in the role that you don’t doubt it for a second. He’s powerful, persuasive, handsome and an actor who is going places. In Kingfishers Catch Fire, both actors command and hold attention, while you learn a lot and go away shaken. 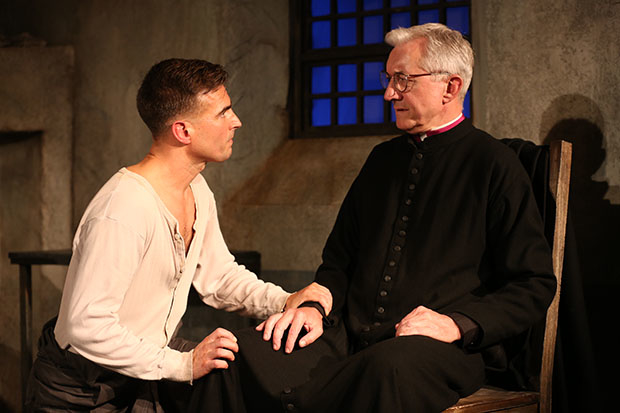