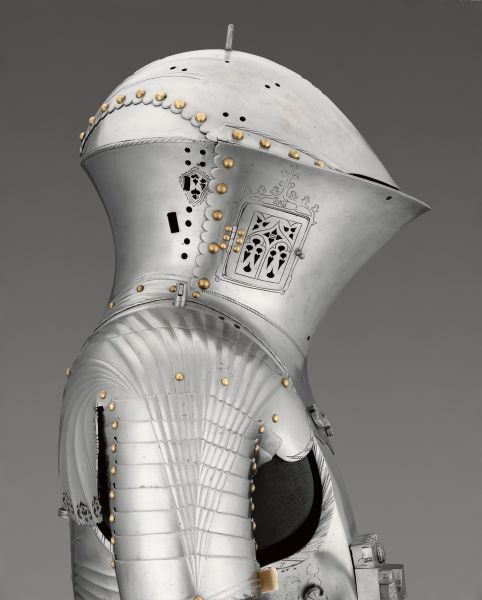 One aim of “The Last Knight: The Art, Armor and Ambition of Maximilian I” is to walk in the shoes of Archduke Maximilian I (1459-1519), the Holy Roman Emperor and Habsburg ruler.

A look at one pair of Maximilian’s shoes suggests how challenging that might be. The shoes, on a suit of steel armor from 1480, are narrow and come to a long sharp point, like a wasp’s stinger. Fighting in them, even standing in them, must have been a torture, even for the winner of a joust. They’re best to look at.

SEE ALSO: Jewish Medieval Treasures Hidden for Centuries Will Go on View at the Cloisters

That could be said for the 180 objects in the Met’s largest armor exhibition in decades, which runs from October 7, 2019 through January 5, 2020.

Curator Pierre Terjanian says that Maximilian’s goal in amassing this magnificent array of armor was to impress. He compares the aristocrat’s acquisition of armor to a public relations campaign. 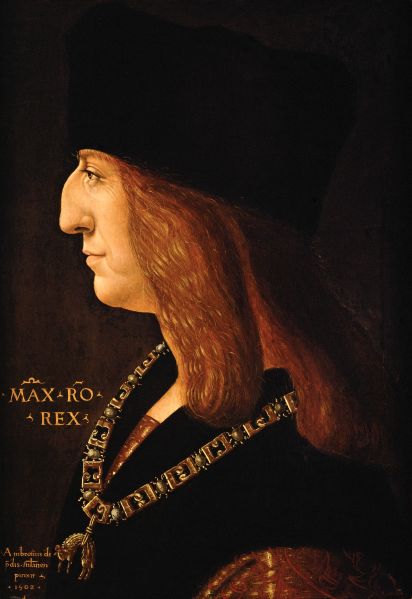 Maximilian, without much wealth of his own, was a man forced to maneuver for power and influence. In 1477, he married Mary of Burgundy (1457-82), depicted in the show in stained-glass from the Chapel of the Holy Blood in Bruges (on loan from the Victoria and Albert Museum in London). Mary was also known as Mary the Rich.

That marriage brought Maximilian, an Austrian, into territories controlled by the Duke of Burgundy (Charles the Bold)—the Netherlands, Belgium, and parts of France—and into wars that put a strain on his wife’s family’s treasury.

Mary died at 25 in 1482. In 1494, Maximilian married the wealthy Bianca Maria Sforza of Milan, also a center of the armor trade. She’s seen in profile in a painting by Giovanni Ambrogio de Predis, on loan from the National Gallery of Art in Washington, D. C.

Besides marrying for money and status, Maximilian worked at building alliances. One of his heroes, whom he adopted as a personal icon, was St. Georges, a religious and mythological figure who was depicted, in armor, vanquishing a dragon. Etchings of St. George, or of Maximilian, on a horse dressed as St. George, are evidence of his branding strategy. It didn’t hurt him among the elites that one of the artists working to make Maximilian look powerful and saintly was Lucas Cranach the Elder (1472-1553). The portraits of rulers who dealt with Maximilian enrich the heraldic atmosphere. 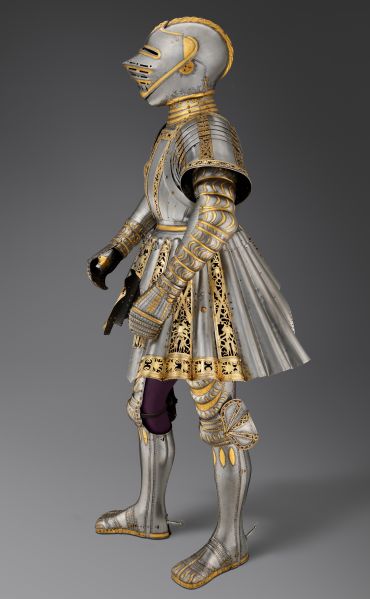 The etchings of man and horse and dragon are an ingenious and revealing chronicle of Maximilian’s ambitions, but the armor’s the thing here. Besides the gleaming 1480 suit with the distinctive hard-to-fill shoes, there is an unusual helmet (1515-20) that seems to have been made for a patron with a bulbous nose, an influence of Venetian traditions of masquerade and grotesquery, said Terjanian.

One helmet design that recurs is the sallet, a covering that extends outward in the rear to protect the nape of the neck. Without much alteration, it could be in almost any science fiction wardrobe.

Skirts were often part of armor ensembles. A steel skirt, which stands alone, separate from everything else in the suit where it originated, has a timeless lightness, like an architectural canopy, in spite of its weight. 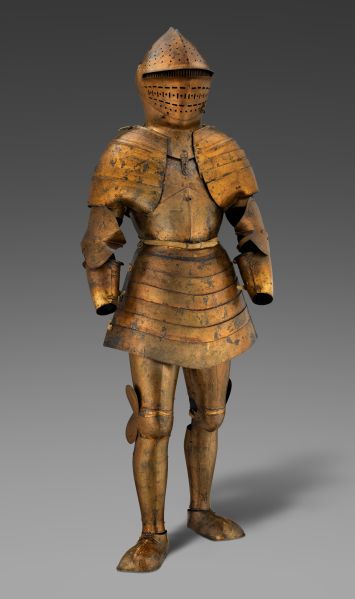 Yet the pivotal work that takes visitors beyond the armor, after it takes them by surprise, is tucked beyond a wall toward the end of the show. It’s a chilling death portrait of Maximilian, unshaven, inclined in bed, with one eye barely open, and his head in a soft cap at an angle on a checkered fabric. It seems an odd pose for anything official, yet Terjanian insists that the work by an unknown German or Austrian artist after 1519 is “too eccentric to have not been commissioned by him.”

“We have no proof,” he noted, “we do know that the last testament of Maximilian prescribed that his body be beaten up and that his teeth be knocked out as a sign of contrition, to turn him into a repentant sinner.”

“There’s a brocade on his chest,” Terjanian added, pointing to a last symbol of status in the painting. 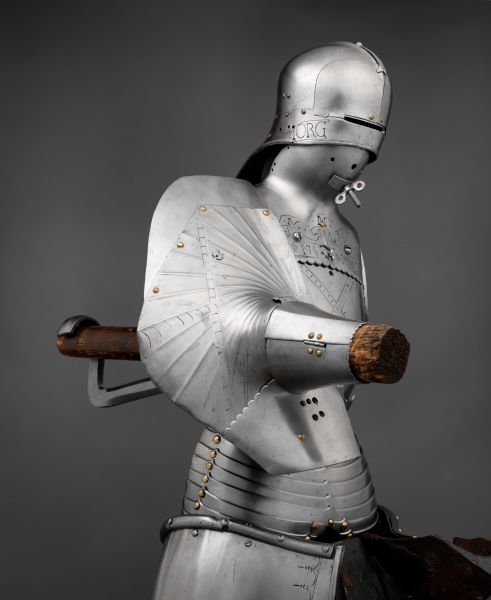 Arms and Armor seeks to make the items of the department more than just antiquarian items to the Met—or curious only for their likeness to objects seen in Game of Thrones. “Not only do arms and armor go across cultures and times, but they have the ability to contextualize objects,” said Met director Max Hollein. Met curators are quick to note that the exhibition devoted to Maximilian, an Austrian, was in the works years before its Austrian director took his job.

The Met’s department holds some 14,000 objects, 60 percent of which are not European. And acquisitions will continue, focusing on “originality of design,” said Terjanian, although he stressed that contemporary firearms won’t be part of that. “Our resources are limited,” he said.

Hollein and Terjanian predict collaborations with other Met departments. Each cited the Costume Institute of the Met, which recently presented the pink-hued “Camp: Notes on Fashion,” which closed September 8.

“We’re due for that, capturing the relationship between armor and fashion and textiles,” he said.

“We all feel vulnerable,” Terjanian noted, “you can think of that literally or metaphorically, but armor is not about to go away.” 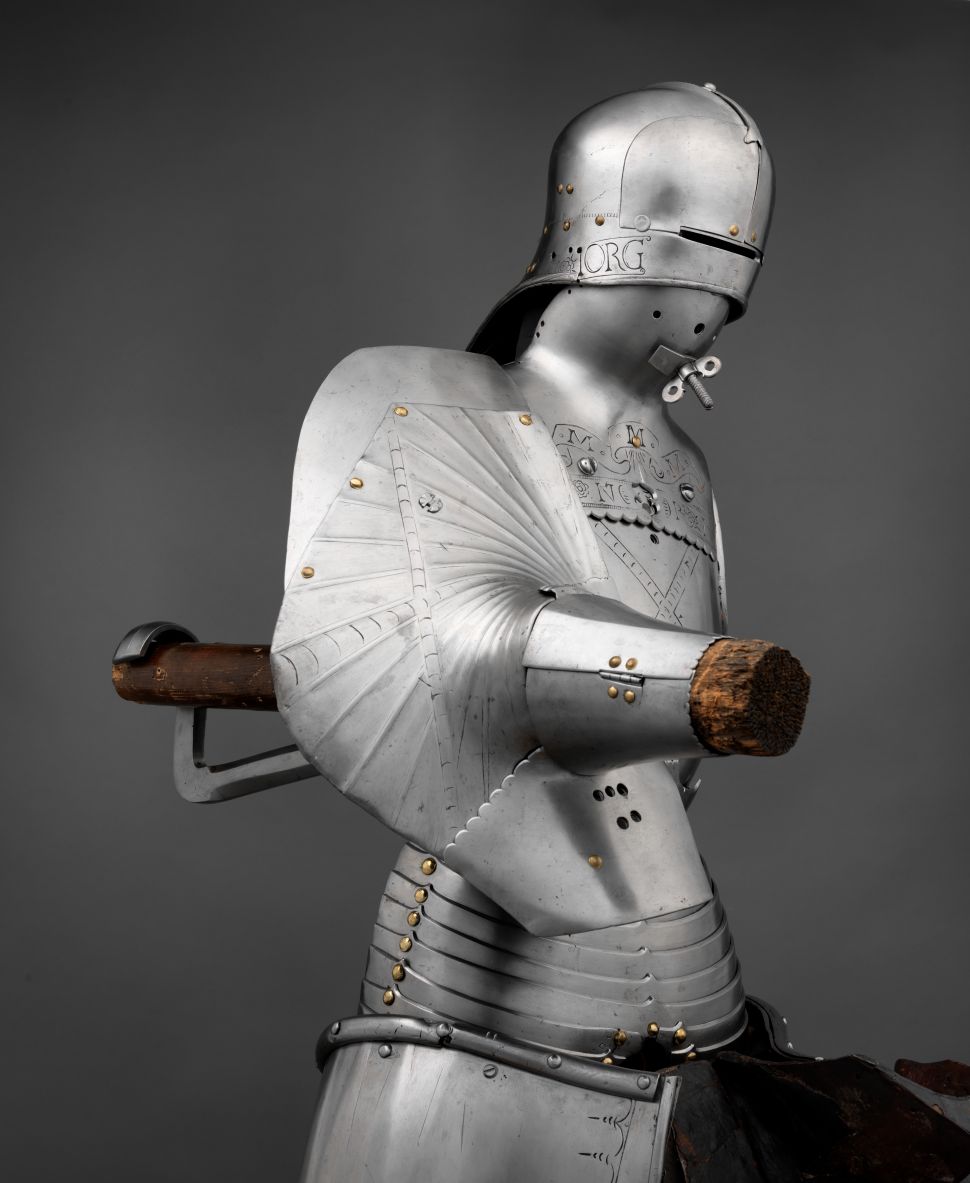