Is it possible to be in a somnambulant and dreamlike state while simultaneously coursing with rage? Can you float helplessly into the ether while at the same time be propelled forward with the velocity of a crossbow bolt fired towards a target in the heat of absolute anger and hate?

These seemingly contradictory states of being not only describe the increasingly unhinged astronaut Lucy Cola (Natalie Portman) in Lucy in the Sky but also the movie that tells her strange story.

SEE ALSO: ‘The Death of Dick Long’ Gets Laughs by Playing It Dead Serious

Inspired by the tabloid-chronicled undoing of NASA astronaut Lisa Nowak, the film directing debut of Noah Hawley (writer and show runner for FX’s Fargo) is a tale spun out of both the gossamer silk of otherworldly poetics and the scratchy burlap of quotidian indignities that ambitious women face everyday in the workplace. While perhaps a few threads short of a master work, the resulting tapestry is not only a singular and disquieting piece of art and social commentary, but also the perfect backdrop for yet another prickly and specific performance from Portman.

We first meet Lucy at the initial tear that leads to her eventual unraveling: she is tethered to a space station looking down on Earth. The film is declaring at the get-go that there are some things we are not meant see—or at least we should stop pretending we don’t see. On top of that list is the Earth floating in the Universe and just how little our lives amount to amidst all the chaos.

Among the things you don’t want to think about from quite that high: the suburban home you live in, the marriage into which you have stumbled, and—more generally—men. The ones in Lucy’s life are deadbeats like her MIA father, chumps like her pious husband (Dan Stevens) who can’t even open a jar of mustard, and the absentee father of the niece she is raising (Pearl Amanda Dickson) who is the worst of all: a poet! Lucy’s chain-smoking gun-toting grandmother, a character brought to life so dynamically by Ellen Burstyn that you can almost smell her secondhand smoke from your seat, regularly points out all of their inadequacies.

Into this morass of weak men stumbles Jon Hamm, a fellow astronaut and Budweiser-swilling divorcee. Initially, their kiss on the flatbed of his pickup is, for Lucy, like the first hit of oxygen after a spacewalk. Eventually though, it becomes one of a series of events that leads her on a cross-country road trip to potentially cause serious harm to him and the other astronaut he is seeing on the side (Zazie Beetz).

Using shifting aspect ratios that push the edges of the frame in on his lead character, extreme high angle shots that seem to seal her fate from upon high, and an echoing and muddled sound mix that matches the pressure building in Lucy’s head, Hawley grabs for every tool he can think of to inflict her shattered psyche on to the screen. Strangely, his throw-everything-against-the-wall approach has a surprising grace. It also is tremendously freeing to his lead actor; he has allowed Portman to just be in the moment and not worry about plumbing the various sources of Lucy’s psychological damage.

Portman’s delicate and damaged portrayal is mesmerizing—and it is not simply because the mess of a Dorothy Hamill haircut she sports. From Jackie to Vox Lux, the actor’s choices indicate she has been trying to say something profound about the way women respond to and internalize trauma; it finally finds full voice here. And, like he does with his TV shows, Hawley paints the corners of his story with actors—Nick Offerman as a psychologist and Tig Notaro as a veteran astronaut, for example—who are able to precisely characterize their small rolls.

Living up to its name, and to the space movie tradition handed down from Stanley Kubrick, Lucy in the Sky is a film that makes you feel a little stoned and disoriented over the course of its unspooling, regardless of what you took on the way into the cinema. This can give the film a feeling of being unfocussed and disconnected—a sensation that is amplified by a coda that feels tacked on.

But Portman, and the meticulous way through which she reveals Lucy’s pain and anger, keeps us connected to the proceedings in the same way that her tether keeps her tied to the space station in that first scene. Sometimes we look on confused and shaking our head, but more often we stare with glassy-eyed wonder at a world—and a movie—that is teeming with all sorts of messy life. 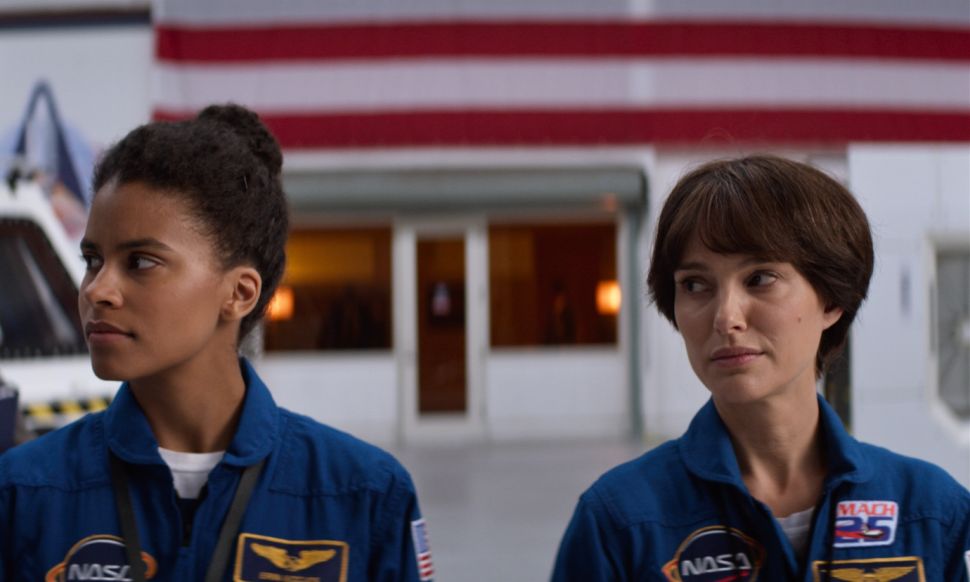