If President Donald Trump gets reelected, it’s not hard to imagine a scenario in which he impetuously tweets our country into a thermonuclear war. So when the apocalypse inevitably arrives, why not let the ultra-rich survive in complete luxury? Sure, let the 1% repopulate the human race with their exquisite tastes, styles and trophy wives.

The 1% already has a leg up in this world, which is why it’s good (for them) to see that the uber-wealthy will still have comfortable lives when nuclear annihilation of the planet occurs.

To facilitate the current paranoia over the uncertainty of our planet, a number of startup companies have popped up to meet the increasing demand for luxury bunkers built for billionaires. That’s right, your doomsday bunker doesn’t have to endure such a frowny-face, gloomy existence. Instead, you can put the “fab” in “prefabricated fallout shelter,” while the poor scratch at your metal, secure door and try to get in as the planet is radiated. Just grab a martini, crank up Beyoncé on that high-end sound system and drown out their screams in the fiery inferno.

Gary Lynch, general manager of the Texas-based Rising S Company, told CNN that sales on the company’s steel bunkers shot up after the 2016 presidential election—by 700%.

Any hypothesis on why?

Rising S even offers construction of what it calls “the Presidential,” as part of its “Luxury Series” of bomb shelters, complete with fitness center, greenhouse and enough beds for 38 people. It can be all yours for a price tag of $4,200,000.

While Rising S Company has a straight-forward sales approach, Vivos’ website looks like it was designed by someone who might also create Scientology sites on the side.

Vivos’ video walk-through tour trumpets such amenities as comfortable leather chairs, modern kitchen appliances and a spacious worktables as selling points. (Although, your luxury bunker would have to be located in South Dakota or Indiana.) Vivos offers co-ownership of an 80-person survival shelter for the low price of $35,000 a person—clientele its founder and CEO, Robert Vicino, has referred to as “middle class.”

“We understand that not everyone is very rich, or else they’d have their own bunker,” Vicino told Observer back in 2013. Well, clearly…

Vivos’ marketing plays directly into our current “nation of fear” mentality. Think we don’t have anything to worry about? Check out the company’s demo video that feature marching North Korean troops, the Eiffel Tower on fire and a tattered American flag.

Yikes… get me to a bunker—now!

“Your father or grandfather’s bunker was not very comfortable,” Vicino more recently told CNN. As if he were also operating an end-of-days cult, Vicino purely plays upon fear to market his high-end bunkers—even using airstrike maps to help seal the deal.

But can you really blame Vicino? If there’s no nuclear war, there’s no business for Vivos. Just crunch the numbers on that, it’s simple math.

This fear-as-marketing played a key role in bunker sales during the Cold War.

In the 1950s and ’60s, the Cold War with Russia prompted mass fear of nuclear war and the first wave of consumer bunkers. During that era, paranoia played a hand in families adding backyard fallout shelters to their homes. The underground constructions resembled a small barracks—typically outfitted with four bunk beds, air and purifying systems and a portable toilet—and were designed to protect U.S. citizens from potential Russian nuclear fallout. The company, Amway, actually sold these egg-shaped, 14-foot bunkers, which they touted could hold eight people, at a cost of $1,750—plus, $160 extra for a connecting tunnel—in early 1960s money. (Based on U.S. inflation rates, today, the price would come out to over $15,000… without the tunnel.)

Families were told to stock up on canned food as a means of survival; the prefabricated shelters of yesteryear did not come “stocked with an abundant supply of freeze-dried foods, meats, grains and a garden of fresh growing vegetables, selected for ongoing taste, variety, nutrition, energy and ease of preparation,” as Vivos boasts about its community shelters. “Members will enjoy well-balanced meals with 2,500 calories per day for breakfast, lunch and dinner on a daily basis. Our menu will provide you with a very satisfying and abundant diet.”

Luxury, by no means, was in the vernacular with these Amway fallout shelters. Spoiler Alert: A nuclear apocalypse did not happen during the Cold War, and these old-timey bunkers were left to rust and rot. Check out this video, and explain to me how your family (or favorite friends or whoever) wouldn’t end up killing each other if they had to live there.

That being said, luxury fallout shelters are nothing new. A Las Vegas house that was constructed during the 1970s was on the market a few years ago. The $1.7 million structure also trumpeted a 15,200-square-foot basement underground home, complete with a fake outdoors consisting of synthetic trees, grass, rocks and faux scenery with faux rolling hills and meadows in the distance.

Fingers crossed, we make it through the Trump era without an actual, legitimate, bomb shelter-level apocalypse. Then, all of these billionaires who have wasted money on luxury bunkers could rent out the facilities as hipster lofts. Airbnb, you might want to get in on this. 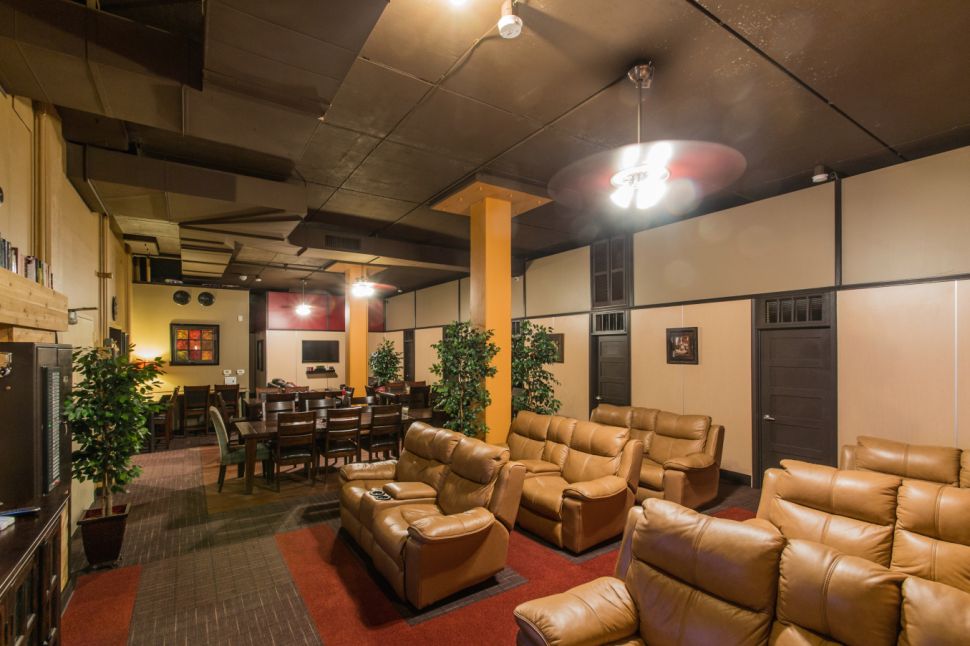