For the past week, pictures of the newly expanded Museum of Modern Art (MoMA) populated all of my social media feeds. Slated to open to the public on October 21, the excitement only seems to be building. During my visit on Monday, attendance at the member’s preview seemed relatively light around noon, but by the time I left that evening, the line to get in snaked down the street. New York Magazine art critic Jerry Saltz has practically camped out at the museum, trying to get an early read on some of the museum’s most pressing questions. Will the extra space ease MoMA’s problems with crowding? Is the new thematic curation successful? What hidden jewels exist within this vast cavern for art? The critics will tell you!

I offer the point of view of a marathoner of sorts—someone who spent just five hours in the museum, which well exceeds the time an average person can spend looking at art before their brain turns to sludge. The point, if not already apparent, is that MoMA’s size makes it impossible to view the whole museum in a day. The expansion, led by architects Diller Scofidio + Renfro in collaboration with Gensler, adds 40,000 square feet to the exhibition galleries, increasing its total square footage to 165,000 square feet. To put this in perspective, the museum is now the size of an Ikea showroom.

Unlike an Ikea experience, though, in which shoppers dutifully follow arrows on the floor from start to check out, there is no road map for this adventure. MoMA divides each level by year and the galleries by theme rather than chronology. At the end of a visit, the viewer is more likely to remember clusters of artworks than they are a manufactured timeline charting the progress of art. It’s a better viewing experience, with the chances of both getting lost and eating at one of MoMA’s Danny Meyer restaurants exponentially higher.

Still, finding the museum’s most popular holdings remains relatively straightforward. The fifth floor remains the most tourist-friendly of the lot, with famed paintings like Vincent Van Gogh’s Starry Night, and Claude Monet’s Waterlilies attracting crowds. The reorganization hasn’t impacted these works in any way beyond making them slightly more accessible. (Waterlilies was not on display when I visited last.) The sixth floor is dedicated to temporary contemporary exhibitions, it always has been, though this one is so compartmentalized, it feels a bit like an art fair. “Surrounds,” assembles eleven descrete installations by  eleven artists, including Hito Steyerl, Sarah Sze and Mark Manders.

In many important ways, MoMA has stayed the same. As others have observed, the renovation improves the look and feel of the space but preserves its likeness to an airport lounge. The cube shape is divided a hundred ways by the galleries, but rarely vertically. Excepting the open lobby area and below-ground store, windows constitute the most exciting material variation used in the building. Commissioned text-based work reads like branding rather than art. Haim Steinbach’s 2013 Hello. Again., in the main lobby, marks a notable low point.

The second floor bears the brunt of these failures, where vast stretches of concrete floor bore the eye. This treatment, now standard in commercial contemporary art galleries, casts a grey shadow over the most vibrant art—an observation that feels like heresy in the context of such a significant collection. Masterwork after masterwork hangs in these galleries, from the 1978 Cindy Sherman Untitled film still series where the artist recreates stereotypical female roles from 1950s and ’60s Hollywood films to the controversial Chris Ofili painting using elephant dung The Holy Virgin Mary, 1996.

Similarly mind-boggling to the number of significant works on view are the prices attached to most of this art. Over the last ten years, the cost of blue-chip contemporary art has skyrocketed at a pace perhaps only matched by MoMA’s acquisitions. A lot of the work on view was purchased recently, indicating the vast wealth of both the museum and its board members.

If this kind of spectacle were without consequence, I doubt there’d be much response, but the wealth that supports a museum of this scale often comes from less-savory sources. This summer, artists and protestors forced Warren B. Kanders to resign from his position as a Whitney board member after revelations emerged that his company sold tear gas used on children at the border. MoMA isn’t any better. Steven A Cohen, a billionaire hedge fund manager, and MoMA board member has been implicated in multiple insider trading investigations. He donated $50 million towards the renovation and the Ofili. This Friday, a protest led by New Sanctuary Coalition demanded that among other things, MoMA trustee Larry Fink, the CEO, and chairman of the investment firm BlackRock, “divest from prison companies, the war machine and the destruction of the environment.”

As a responsible citizen, I have to acknowledge that the profiteering benefiting billionaire board members isn’t worth the giant museum it funds in return. As a critic, though, it’s my job to advocate for the art inside the museum. With these two roles in conflict, perhaps the most honest observation I can offer is that art may constitute the sole enjoyable outcome of our new plutocracy. With the MoMA’s focus on Modernism, audiences have a chance to look back at and learn from better times.

It’s no surprise, then, that the museum’s biggest successes hang in the galleries showcasing this modernist work. The hardwood floors and painted walls create a more intimate experience with much of the art, making viewing vastly more enjoyable. Most importantly, though, the thematic rehanging of these floors offer a broader, and more inclusive look at  artists shaping visual arts culture. Those artists include a new Latin American section on the fourth floor, which features masterworks by artists such as Hélio Oiticica, Alejandro Otero and Tomás Maldonado. In particular, the architectural and textile works stand out for their perfected balance—Oiticica’s Relevo Neoconcrete (Neoconcrete Relief), a house-shaped canvas painted in beige, and Otero’s Tablon de Pampatar (Pampatar Board), a striking series of colorful geometric abstractions, to name just two.

In another section, thirty in a series of sixty Jacob Lawrence paintings chart the exodus of African Americans during World War I from the south to the north and western regions of America. After decades of marginalization, it’s a relief to see these paintings placed front and center. The piece leads into rooms with works by Jackson Pollock, William de Kooning and Franz Kline.

The most potent pairing in these rooms may also be the least controversial—the bold, muscular abstractions of Grace Hartigan and Lee Krasner placed alongside the more carefully constructed work of Willem de Kooning. I’ve been writing about this for years, but I’ve long thought that the gendered language describing the work of male abstract expressionists as “aggressive” and “violent” failed to respond to the way painters like de Kooning applied paint to the canvas—judiciously. This hanging makes evident what should have been recognized long ago; that  descriptions of male abstract expressionists respond to how we think about gender and have little to do with the art.

One floor up, the more daring arrangement of paintings—Picasso’s Les Demoiselles d’Avignon, 1907, and Faith Ringgold’s American People Series No. 20: Die, 1967—challenges traditionalists who believe in the triumph of invention by foregrounding the problematic politics of Picasso. Next to Ringgold, Picasso’s painting of nude prostitutes feels unabashedly exposed—shameless witnesses to the interracial race riots and bloody bodies splayed over the canvas just a few feet away.

As with any show, the arrangements aren’t all perfect. The section “Masters of Popular Painting” includes an eerie painting of a cat lounging on a love seat by Morris Hirshfield sitting adjacent to Responding to War. It’s a little jarring to move from cats to a tortured painting by Francis Bacon picturing a splayed cow and a sinister figure with only half its head. But this is small, and will likely change over the next year and a half. MoMA plans to switch out one-third of its collection every six months, with the galleries fully refreshed every 18 months.

Progressive practices like this only have upsides. They ensure a lot more of the collection can be seen and encourage return trips from patrons. But they can’t be implemented in isolation. If the museum is going to offer so many holdings that repeating visits are necessary, it should reward those who want to make them with cheaper admission. $25 a day for a museum that takes two to three days to see in its entirety is cost-prohibitive. I see art for a living, and five hours gave me impressions—not a thorough understanding of what’s on view.  For the vast majority of observers, the viewing experience will be vastly more complex than it was four months ago, but a fraction of its potential.. 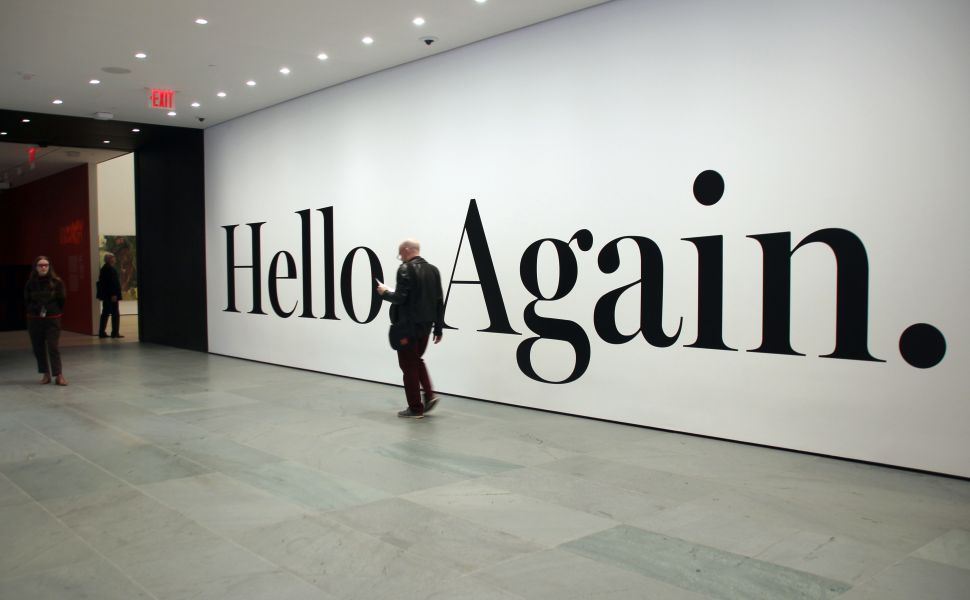