This morning, two NASA’s astronauts—Christina Koch and Jessica Meir—made history during a routine seven-hour spacewalk. That’s because for the first time in more than five decades of spacewalking, the pair of astronauts tethered to the space station were both women.

That’s a pretty big deal. Of the more than 560 people who have been in space around the world, only 65 have been women. Of that number, only 14 have participated in a spacewalk; today, Meir became the 15th.

Every woman who has ever suited up to venture out into the blackness of space has done so alongside a male counterpart. Although more than one woman has occupied the space station at the same time, this is the first time two women have spacewalked together, making it a major milestone not only for NASA, but also the world.

Koch and Meir spoke about women working in human spaceflight during a recent news conference. “I think it’s important because of the historical nature of what we’re doing and that in the past, women haven’t always been at the table,” Koch said. “It’s wonderful to be contributing to human spaceflight at a time when all contributions are being accepted, when everyone has a role and that can lead, in turn, to increased chance for success.”

This is my aspiring astronaut daughter and her bus stop friends watching the #AllWomanSpacewalk.

History right in front of their eyes. #NASA pic.twitter.com/7qAUMSRAod

Woke the girls up to watch the first all-female @NASA #Spacewalk this morning. My oldest said, “when I’m an astronaut will I have to fix things too?” Thank you NASA, @Astro_Christina and @Astro_Jessica for this amazing moment! pic.twitter.com/ffGZvSF13m

Today’s milestone is one that almost happened earlier this year. Due to a malfunction with a Russian Soyuz rocket last October, NASA was forced to switch around crew assignments and spacewalk dates. The changeup led to the space agency casually mentioning that Chistina Koch and Anne McClain would conduct the first all-female spacewalk back in March.

Excited headlines praising NASA for finally allowing two women to partner up soon turned critical when it was quickly announced that the spacewalk wouldn’t happen as planned, because NASA didn’t have enough spacesuits to fit the two female astronauts—both needed a size medium. And there was only one functioning medium on board.

But NASA did prepare another suit, and Christina and Jessica made history on Friday, when they ventured outside the International Space Station. The duo began their space walk around 7:50 a.m. as part of an effort to make an urgent repair to the station’s power system. They started off with replacing a faulty battery charge/discharge unit (BCDU) that failed to activate earlier this month when new lithium-ion batteries were installed on the station’s exterior. After finishing that task, they moved on to tackle some other “get-ahead tasks” on the space station.

Today’s spacewalk was the eighth so far this year and the 221st total in the past two decades. Yet it’s the first to feature two women. During a press briefing held at NASA headquarters, one reporter asked why.

Ken Bowersox, the acting NASA administrator for NASA’s division of human exploration and operations, indicated that physical differences between men and women were a leading factor.

“There are some physical reasons that make it harder sometimes for women to do spacewalks,” he said. “It’s a little bit like playing in the NBA. I’m too short to play in the NBA, and sometimes physical characteristics make a difference in certain activities, and spacewalks are one of those areas where just how your body is built in shape, it makes a difference in how well you can work the suit.”

He went on to say that women were smaller in stature than men, which was why there aren’t as many doing spacewalks. Bowersox added that female astronauts have worked around these constraints. “But we’ve also brought women into the crews because of their brains,” he said. “They come in, they bring different skills, they think of things differently. And by using their brains, they can overcome a lot of those physical challenges.”

His remarks were startling. The spacesuits NASA uses for spacewalks are antiquated, designed decades ago with men in mind. So the issue is more of a design bias rather than the physical limitations of women’s bodies. It’s true that men tend to be stronger and larger than women, but if the suits were better designed for a range of body types, it wouldn’t matter.

I remember interviewing former NASA astronaut Rhea Seddon a few years ago and asking about her spacewalking experience. I was slightly taken aback when I heard that she didn’t get to leave the space shuttle because she was too small and the inflexible suit didn’t fit her. (At the time, I assumed most astronauts were able to go on spacewalks.)

“Absolute ugh,” Ellen Stofan, a former NASA chief scientist and the current director of the Smithsonian’s Air and Space Museum, tweeted when she saw Bowersox’s remarks on social media. “No physical reasons. Not small enough spacesuits. Equipment problems held women back—and the men who made decisions about that equipment.”

However, Jim Bridenstine, the NASA administrator, spoke up to say that there are ways in which women are better suited for spaceflight than men. “Cranial pressure for women seems to be less than that of men when you’re in a microgravity environment for long periods of time,” he said, referring to a side effect of spaceflight that occurs when bodily fluids put pressure on the optic nerve. (The phenomenon can lead to long-term vision changes.)

Koch isn’t done breaking records just yet. She is set to stay on the station until February 2020 and will rack up the most number of days in space by a woman, surpassing Peggy Whitson, who spent 288 consecutive days in space. She will end up just shy of the longest single spaceflight by a NASA astronaut—340 days, set by Scott Kelly.

Her mission will help enable researchers to better understand the long-term effects of space travel on the human body. 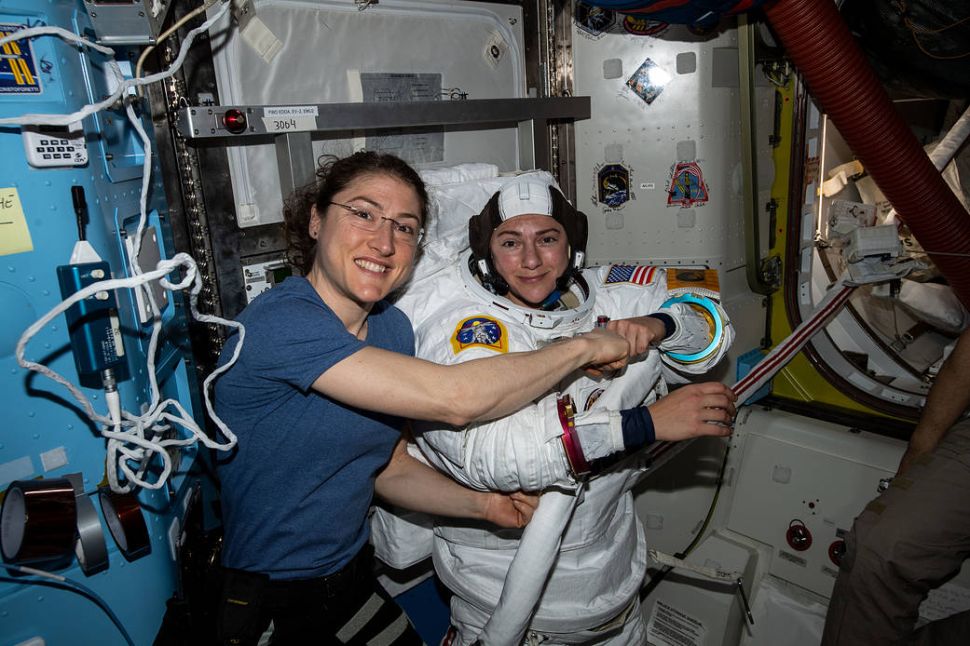