In the days immediately after Houston Rockets general manager Daryl Morey took China by storm with seven words, “Fight for freedom, stand with Hong Kong,” everyone expected the NBA to play by the Chinese government’s playbook: apologize profusely, show contrition and seek rehabilitation.

Since the Hong Kong protests broke out in June, Cathay Pacific, Versace, Givenchy and Coach have been among the global brands to go through similar drills. For years, Chinese censors have known that Western capitalists are willing to trade any vouched values for China’s 1.4 billion-person market.

NBA China’s franchise value, according to Forbes, carries a $4 billion price tag. But is this free speech exercise worth the $4 billion?

Morey has since deleted his tweet and expressed regret, but NBA commissioner Adam Silver, after the Chinese translation of his initial statement was criticized for striking a more conciliatory tone than the English original, has stated that he will not apologize for Morey’s comment, citing the American league’s values of “equality, respect and freedom of expression.”

Chinese state-run TV network CCTV and internet giant Tencent canceled their broadcasts of the Rockets’ preseason matches, and Chinese sponsors, such as Li-Ning Company and Shanghai Pudong Development Bank, severed partnerships with the Rockets. Nevertheless, fans still filled up the stadium in Shanghai to cheer for the Lakers vs. Nets game, seemingly oblivious to what CNBC commentator Jake Novak called a government-fed national “outrage culture.”

But as the fallout in China creates a backlash among the American public and political circles, the geopolitical and economic calculations have started to shift in both countries. There are signs that the Chinese state media have received instructions to dial down their belligerent rhetoric on the incident. By October 14, live broadcasts of the NBA preseason games, except for ones involving the Rockets, have returned to China.

Even Hu Xijin, editor-in-chief of the Chinese government-controlled Global Times, wrote that he supported the turnout for the NBA game in Shanghai because “we are against Morey’s disrespect for the Chinese public, but we do not intend to sever the tie with the NBA completely.”

Joseph Tsai, co-founder of Alibaba Group and newly minted owner of Brooklyn Nets, penned a lengthy defense of China’s fury on his Facebook page. After explaining China’s recent history of foreign invasions and occupations, Tsai wrote, “Chinese people feel a strong sense of shame and anger… when the topic of any separatist movement comes up.”

“The one thing that is terribly misunderstood, and often ignored, by the Western press and those critical of China, is that 1.4 billion Chinese citizens stand united when it comes to the territorial integrity of China and the country’s sovereignty over her homeland. This issue is non-negotiable,” Tsai noted.

Tsai’s impassioned manifesto, which also expresses his vow to continue to speak up for the Chinese, resonated with many Chinese readers on China’s biggest social media site Weibo, who say it serves an important function by educating Western readers about the historical context of China’s rage.

But it has also come under criticism in the West for acting out of commercial interest. After all, Alibaba is on the receiving end of the Chinese government’s grace and Tsai’s Nets team was teed up to play against the Lakers in China three days later. Some are also questioning the underpinning of this “victimhood” narrative, which has become China’s sword of attack on any views departing from its narrowly defined nationalist line.

As one Nets fan wrote on Tsai’s Twitter page: “You may gain Chinese fans but may lose American ones. I understand why Chinese fans are angry but the way Chinese government bullied NBA and Rockets is not OK. This should have been handled differently. As a Nets fan, we want you to understand that as well.”

More importantly, Yale Law-educated Tsai, and indirect owner of The South China Morning Post through Alibaba, should have known better: other than for a subset of the involved groups, independence is not the main appeal of the Hong Kong protests. The separatist narrative is a construct intended to sway public opinion in China but, unfortunately, erects additional roadblocks to finding a pragmatic solution to the Hong Kong impasse.

While Tsai suggests that he speaks for the 1.4 billion people in China, one Chinese commentator for a WeChat public account named “Landlord Economics” pondered: “It’s quite puzzling that Morey’s words provoked such a strong reaction. He said that he ‘stands with Hong Kong.’ Isn’t Hong Kong part of China?  Why are we so upset that he stood with Hong Kong? Have these viewers already subconsciously treated Hong Kong as an enemy? If this were the case, who is the separatist?”

The same commentator was equally puzzled by the controversy caused by the phrase “fight for freedom,” writing, “We must know that freedom is written as the socialist core values of our country. Whether it is the mainland Chinese government, the Hong Kong government, or the Hong Kong police, its duty is to protect the freedom and rights of the citizens.”

The post has since been deleted by an administrator for the Tencent-owned WeChat.

With the NBA fallout likely marking a watershed event, China could decide that the costs of safeguarding its “glass heart” are too high, while the benefits of insulting the American tenet of free speech may be insufficient to justify its grandstand demands for apology.

The reality is that while the Hong Kong issue might not have been a concern in every American household, China’s overreaction to the NBA’s “faux pas” effectively drove home the message: the Chinese government has extended its long arm to dictate what an American can or cannot say on social media.

And, at the end of the day, Twitter is banned in China. So why did the Chinese netizens get all up in arms about what essentially lived outside the Great Firewall, were it not for a state-engineered campaign?

If China continues to blow up the scale of its game of victimhood, it will also see diminishing returns. By not de-escalating the NBA crisis China risks further damaging the country’s overseas image, blowing up the Hong Kong controversy and a retaliatory boycott of the Beijing Winter Olympics in 2022.

U.S. President Donald Trump has slammed Golden State Warriors coach Steve Kerr and San Antonio Spurs coach Gregg Popovich for airing grievances about the U.S. government, while readily “pandering” to China. Yet, U.S. lawmakers are calling out the NBA for “kowtowing” to China’s economic might. The NBA incident thus exposes an uncomfortable question as to whether the NBA’s self-styled “principles and values” are simply convenient sideshows to commercial interest.

Unfortunately, the net effect is likely that this incident will create a chilling effect on American companies and their employees in exercising their rights to free speech. They will try to internalize the rules of the game in China and avoid any “third rail” subjects, to quote Tsai’s verbiage in his Facebook post. Hong Kong may easily become a new member to the 3T (Tibet, Taiwan and Tiananmen) taboos in our China-facing discourse.

But before these companies bend backwards to toe the Chinese government’s line, the NBA controversy also holds an important lesson for all stakeholders.

The U.S. and China share the same business wisdom: “Customers are always right.” China has exploited this capitalist truism to its maximum effect. As Hu of The Global Times tweeted on October 7: “Daryl Morey has the right to express his values, and Chinese fans of the Houston Rockets have the right to abandon this team. If the Rockets want to keep its Chinese market, the team need [sic] to avoid offending Chinese public. Respecting client is a universal business principle.”

At the same time, nationalists in any part of the world should know better: knee-jerk patriotism can get out of hand and invite unintended consequences. When a global brand like the NBA not only serves a Chinese, but also an American and global audience, the equation changes, along with the leverage. 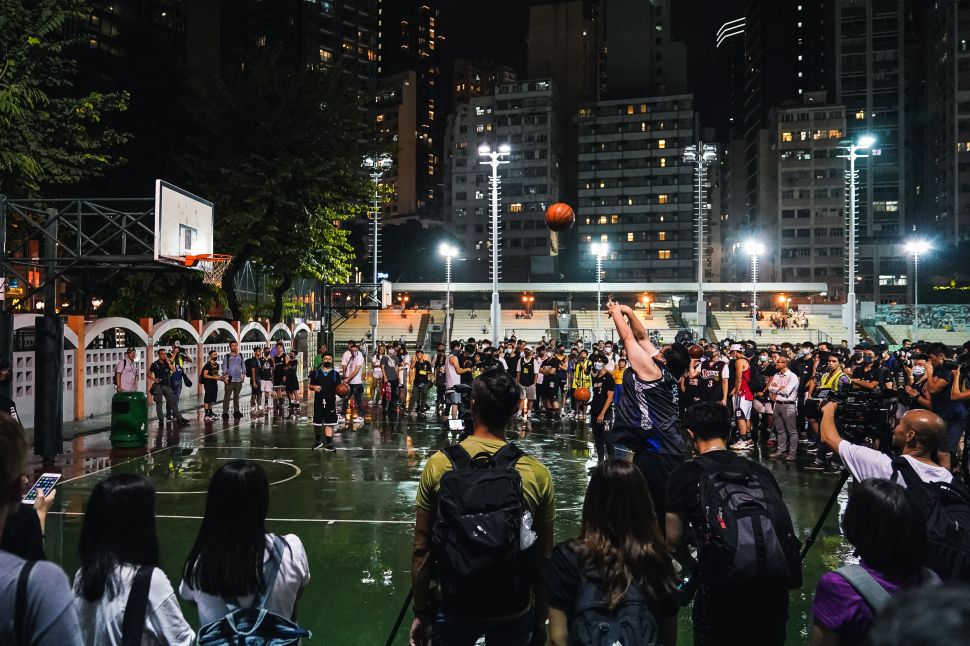