The strongest aspect of New York City Ballet’s annual fashion gala was, once again, its length—short! No speeches, no intermissions. Alas, there were ballets, and fashion. Let’s deal with them quickly, since no one’s going to be thinking about them for very long.

Edwaard Liang, an ex-soloist with the company and now artistic director of BalletMet, came up with something called Lineage. It quickly occurred to me why I couldn’t remember a single specific thing about any of the Liang ballets I’ve seen over the years: there are no specific things about them. Every one of them is completely generic. This one had overwrought music by Oliver Davis and overwrought costumes by Anna Sui—the latter all glittery and obtrusive. Three of the company’s leading ballerinas—Maria Kowroski, Sara Mearns, and Ashley Bouder—were wasted in this effort; their partners (and there was all too much partnering going on) were Tyler Angle, Russell Janzen, and Peter Walker. Best served were the two soloists: Indiana Woodward and Roman Mejia. I’m afraid it’s a bad sign that the company’s new artistic director, Jonathan Stafford, commissioned this predictable loser.

At least it made sense that the other new work, The Shaded Line, was by principal dancer Lauren Lovette, who had already made two modestly effective ballets for the company. This new one was not modest, and not effective either. Lovette used 20 dancers, and as yet she hasn’t displayed a particular talent for deploying large forces—this was a big muddle. Front and center: that quirky soloist Georgina Pazcoguin, dressed as a boy, sort of, and blazing with attitude. On hand to partner her were Mary Thomas MacKinnon and Unity Phelan (finally come into her own), and Taylor Stanley. Also on hand were costumes by trendy Zac Posen—nothing but trendiness could explain grotesque tutus that bunched up and stuck out and up in the rear. At one point the corps girls had flung themselves to the ground and lay there, bottoms up, looking like a bunch of drowned ostriches. For this, Taglioni, Pavlova, Fonteyn lived and danced.

Relief was in sight, since the closing work was Balanchine’s great Symphony in C, but the relief was intermittent. The first movement is especially demanding, and what it demands is a powerful, dominating presence in its ballerina—for years it was Maria Tallchief, than whom no one was more powerful and dominant. What was Megan Fairchild, although she’s worked hard and improved dramatically, doing in it? She’s a born soubrette who can do the steps pleasingly but can’t convey the authority. Alas, Tiler Peck was out the entire season, and Bouder was being glittery in Lineage. Second movement was Teresa Reichlen, a striking and impressive presence but as yet without the depth of a LeClercq, a Kent, a Farrell. A happy surprise was the debut as the third movement ballerina of a corps member I’ve never even been aware of: Baily Jones. She was at ease; jaunty without being cute. As for the fourth movement, it was led by Erica Pereira, or so the program told us. I barely could spot her in the milling throng—talk about an anti-climax. This was desperation casting. Why do “Bizet,” as we love to call it, if you can’t cast it? (Pereira, I’m happy to say, made a charming impression in Balanchine’s Valse-Fantaisie—this is her métier, not a flashy power role.) To give credit where it’s due, the demi-couples flanking the principals looked well rehearsed and enjoying themselves. These recent costumes are a desecration.

Let’s celebrate the season’s highlights, starting with Balanchine’s astounding deployment of 70 (!) kilted dancers in the long opening section of Union Jack. Does that demented bicentenary tribute to the British still work? It does, if you love it. The marching regiments, the hijinks of the Pearly King and Queen (and their tots, and their donkey), the prancing, horny salts and Wrens of the Royal Navy, the stunning finale with everyone semaphoring “God Save the Queen” while cannons roar—this from the creator of Apollo, The Four Temperaments, Liebeslieder Walzer, Concerto Barocco, Serenade! Well, why not? Balanchine could do—and just about did do—everything.

Then there was Daniel Ulbricht in everything he did, from the Pearly King to “The Sigh” in Variations Pour Une Porte et Un Soupir. What an artist he’s turned out to be! And in that weirdest of Balanchine ballets, what a partner he had: Maria Kowroski, in the glorious high summer of her career. This was spectacular casting! And Korowski was as grand as ever in “Diamonds.”

The other jewels in Jewels fared less well. “Rubies” was a disaster. Sterling Hyltin flung herself into it, but there was not only a lack of rapport between her and Andrew Veyette, there was a lack of mutual acknowledgment, let alone a gleeful complicity. They barely looked at each other. To put it bluntly, he can no longer dance this great role, and to expose him in it was a disservice to Hyltin, to Balanchine, to the audience, and to himself. “Emeralds” was dutiful—Amar Ramasar, back with the company, is not really “Emeralds” material. Now he would have been a “Ruby” guy!

I hope Hyltin took solace from the lovely performance she gave in the central role of Serenade. As for Sara Mearns, in Tschaikovsky Piano Concerto No. 2 she was strong and imperturbable, if somewhat muted, in the face of its daunting demands. (Oddly, she was even more muted in the thrilling “MacDonald of Sleat” solo in Union Jack—I thought it would be a natural for her.) Here was yet another breakthrough role for Unity Phelan. She, Ulbricht, Kowroski, Woodward, Mejia and Emily Gerrity were the season’s standouts, though even Gerrity and Phelan couldn’t make a silk purse out of Balanchine’s Kammermusik No. 2, with its grim Hindemith score and its endlessness. The audience responded to it politely, as usual.

The big novelty of the season was the revival of Merce Cunningham’s Summerspace, with its wonderful pointillist backdrop and costumes by Robert Rauschenberg. This year is the Cunningham centenary, and Cunningham-lovers were out in force—and seemed satisfied. Although I’m generally immune to his work, I certainly respect it, and I thought the company looked comfortable, if not exactly Cunninghamish. Adrian Danchig-Waring, not sufficiently appreciated, seemed happiest in it—light and easily airborne, like the birds the dancers apparently represent. This is, indeed, a happy ballet, and a good fit with the rest of the company’s repertory, as it seemed back in 1968 when City Ballet first performed it. Why keep it in hiding, and then trot out Christopher Wheeldon’s abominable DGV: Danse à Grande Vitesse? Jonathan Stafford and his Associate Artistic Director, Wendy Whelan, have a long way to go before we can all relax about the future. 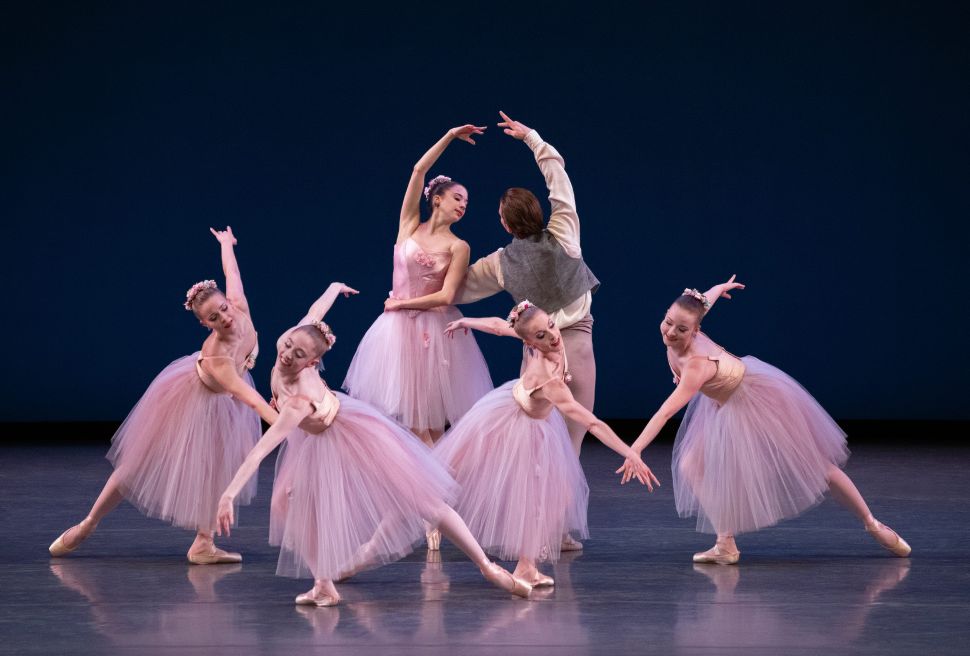