The word “revival” is a such an odd term when you think about it. To bring something back to life surely implies that thing is dead. Getting corpses up and kicking again sounds like something better suited to the tinfoil flying saucers of Plan 9 from Outer Space than the golden halls of the stately Metropolitan Opera.

And yet, by the numbers, revivals are the Met’s bread and butter: more than 75 percent of the company’s productions in 2018-2020 originated a season or more ago; only five of the stagings are new. So, like it or not, a major part of the Met’s artistic job is to try to make the undead look lively.

SEE ALSO: Not Quite Gold, but ‘Turandot’ Still Glitters as the Met’s First Sunday Matinee

Ironically, the most successful example of this process so far this season is an opera that is literally about the resurrection of the dead, Gluck’s Orfeo ed Euridice. Under the supervision of the 2007 production’s original director and choreographer, Mark Morris, the production achieved a paradoxical but warmly satisfying balance of irony and gravitas.

What concept exists Morris has sketched in lightly. For most of the show the action is framed by tiered galleries suggesting a sports arena or perhaps a medical operating theater. The Met chorus, powerfully responsive as always, are garbed as historical figures ranging from ancient Asian potentates to 20th century rock stars. The effect is at once gently campy and quietly grave, as if the cream of the afterlife have gathered for the important event of Orfeo’s trek into the underworld.

The dances, it seems to me, feel more spontaneous this time around than they did a decade ago: always expressive, but in a slender way, growing organically from simple steps and gestures.  All that Morris has missed, I think, is imparting a unified and graceful style of movement for the role of Orfeo, mezzo Jamie Barton.

But that quality perhaps will come with time (Sunday afternoon was her role debut in this extremely demanding part.) By every other measure she achieves a rare standard of beauty: an even, rich voice across a broad range; easy, unfussy legato and richly expressive declamation.

Barton’s noble performance of Orfeo’s great lament played not as a standout 11 o’clock number, but rather was knit together with the long and lofty preceding scene of arioso dialogue with Orfeo’s revived but heartbroken wife Euridice. Barton’s accomplishment here was all the more impressive since her partner in the scene, soprano Hei-Kyung Hong, tiptoed though her music with exaggerated care.

If Mark Wigglesworth’s conducting felt a notch small for the vast Met, he did achieve a remarkable variety of colors and sensibilities in the opera’s 90 minutes of music, performed as a single act.

Another revival last week didn’t fare quite so well in the journey back from the other side. The Met’s visually stunning Madama Butterfly, originally directed by Anthony Minghella, lacked energy and focus on October 15. The spare, meticulously curated visuals of this staging challenge performers to dominate a mostly negative space; what’s happening this season looks more like a gaggle of opera singers waiting patiently for the sets to arrive.

The exception is soprano Hui He, who billows with old-school prima donna energy, a hurricane of determined if not always poetic movement. That’s how her voice works, too: a full-out wail that sets the theater vibrating. If He’s topmost notes refuse to tune, that is (for me at least) not such a big deal. She alone on stage understands the high stakes of this opera, as such first-class singers as Elizabeth DeShong and Paulo Szot tactfully look on. 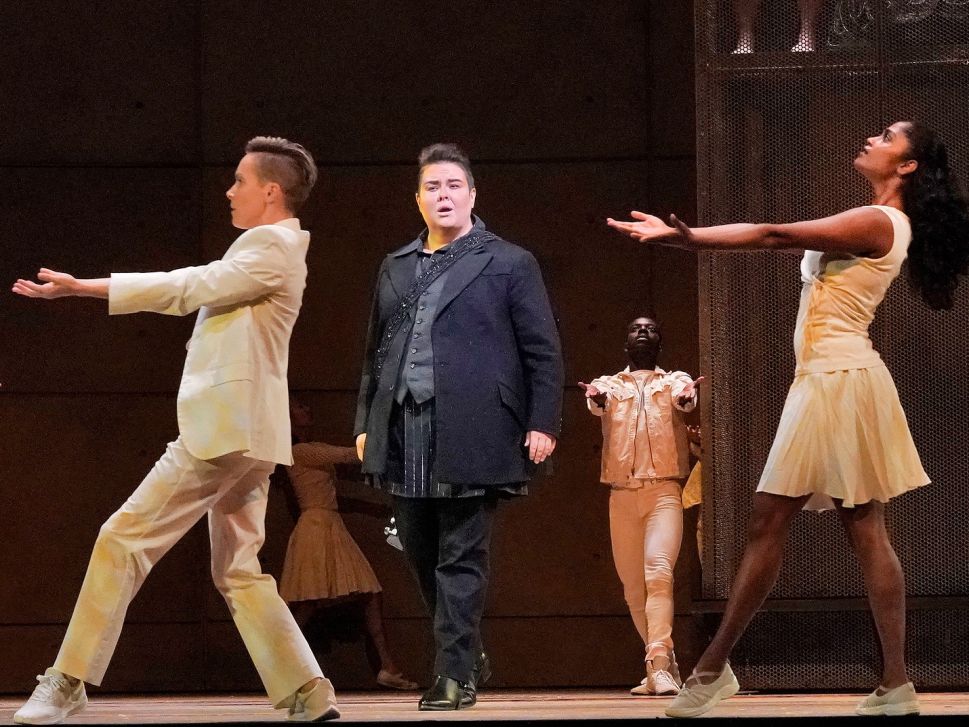