The Duke and Duchess of Cambridge are now on day three of their packed Pakistan royal tour. Prince William and Kate Middleton’s engagements are being released slowly, and only with very short notice due to security concerns, and today they’ve continued to follow in Princess Diana’s footsteps.

The late Princess Diana visited Pakistan in 1991 on an official royal visit, and then separately in 1996 and 1997. Yesterday, the Duke and Duchess of Cambridge met with Princess Di’s close friend, the now Prime Minister Imran Khan, at his official residence, and day three of the trip is still acknowledging Prince William’s mother.

Prince William and Kate headed to the northern region of the country today to see the Hindu Kush mountain range, and observe firsthand the impact of climate change and global warming on the local communities. They walked around the tip of a glacier to see how it has retreated, and then flew to Chitral, where Princess Diana visited on her 1991 official tour, to learn about the people and their heritage and traditions.

Upon arrival, the Duke and Duchess of Cambridge were given a book containing photos of Princess Diana’s trip to the area in 1991. Princess Diana was made an honorary member of the Chitral Scouts’ elite corps during her visit, according to Hello, and was presented with a special regional coat and hat she donned for many a photo. Her daughter-in-law followed in her footsteps today, as Kate was given a traditional Chitrali hat as well as a shawl, which she immediately put on. Prince William also wore the hat and coat he was gifted.

Duchess Kate was then given an even more colorful, feathered headpiece during her time with the Kalash, as she and Prince William received a cheerful welcome from the locals and watched a celebration in the village square.

Kate’s other fashion choices on the trip have also been in line with Princess Diana’s attire in Pakistan; the Duchess of Cambridge’s first ensemble, a Catherine Walker dress and pants, was similar to an outfit Princess Diana wore in 1996, and her blue kurta yesterday echoed Princess Diana’s 1997 look.

Kensington Palace hasn’t disclosed Prince William and Kate’s exact schedule for the last two days of their Pakistan royal tour just yet, but we do know that the royal couple will be visiting Lahore, where Princess Diana previously stayed, and locales in the western countryside. 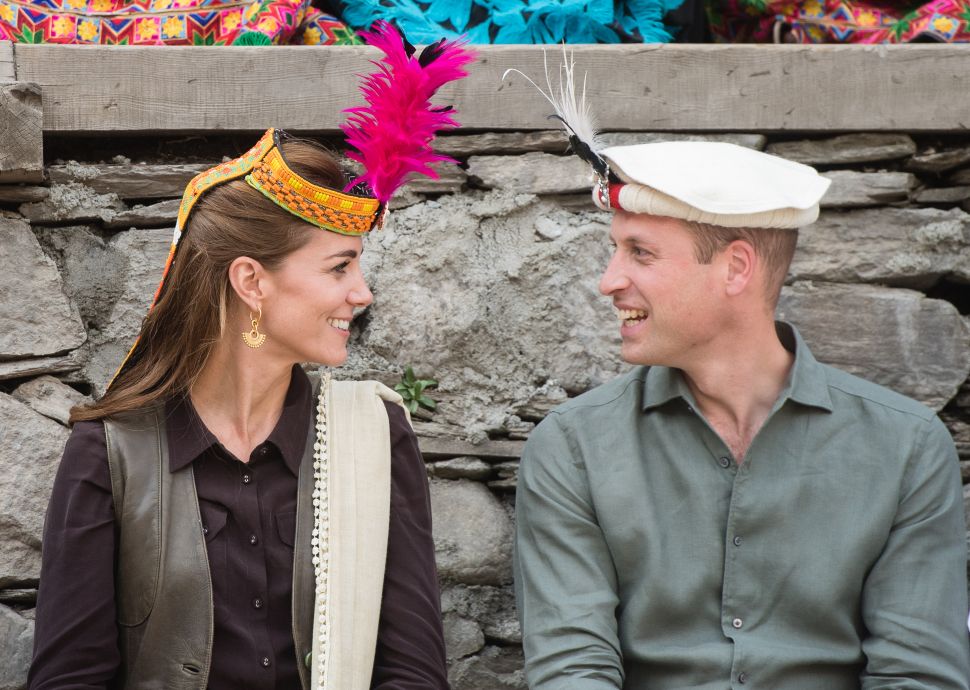