After months of planning, the Duke and Duchess of Cambridge arrived in Pakistan last night for their five-day royal tour. Kensington Palace disclosed that this will be Prince William and Kate Middleton’s “most complex” tour yet, largely due to security considerations. As such, specific details for engagements and events haven’t been released until absolutely necessary.

Prince William and Kate have gone on a number of royal visits in the past, but for this trip, the massive security operation reportedly includes 1,000 police officers on hand to help out. The Cambridges also brought a tour doctor with them for the first time ever, according to royal reporter Rebecca English, as typically only Queen Elizabeth and Prince Philip bring a medic with them.

Their packed schedule today started with a stop at the Islamabad Model College for Girls, where they spoke with young students and heard about the Teach for Pakistan program, before going to Margalla Hills.

The busy day also included a meeting with Pakistan’s President Arif Alvi at the Presidential Palace, and a lunch with Prime Minister Imran Khan at his official residence. The latter was particularly important for the Duke of Cambridge, as the Prime Minister was a close friend of Princess Diana. In fact, Khan and his now ex-wife, British socialite Jemima Goldsmith, hosted the late Princess Di on her visit to Pakistan in 1997.

The Duke and Duchess of Cambridge ended their first full day of engagements with a glitzy reception at the Pakistan Monument, hosted by the British High Commissioner, Thomas Drew, to showcase the country’s music, art, culture and relationship with the United Kingdom. Kate’s royal tour fashion is already out in full force, as she often uses sartorial choices to showcase local designers as well as honor the host country with certain colors and accessories. So far, she’s donned apparel by Catherine Walker and local designer Zeen, with Pakistani-inspired pieces like a kurta and tunic.

For the Pakistan Monument reception, which is the fanciest event thus far, she chose a sparkly emerald green (the color of Pakistan’s flag) Jenny Packham dress, but her husband also upped his sartorial game—Prince William wore a sherwani (a coat-esque piece over pants) by Naushemian. Our personal favorite part of the arrival, however, is that the Cambridges took a brightly painted, motorized rickshaw as their transport.

Prince William gave his first official speech of the tour at the event; he discussed girls’ education and climate change, and encourage the United Kingdom and Pakistan to continue working together.

Kensington Palace isn’t releasing details about the next days of the royal tour just yet, but we assume the engagements will continue to be in line with the causes Prince William and Kate are focusing on for this trip—specifically, access to education for girls and environment concerns—as well as showing Pakistan today. Hopefully, another rickshaw is involved. 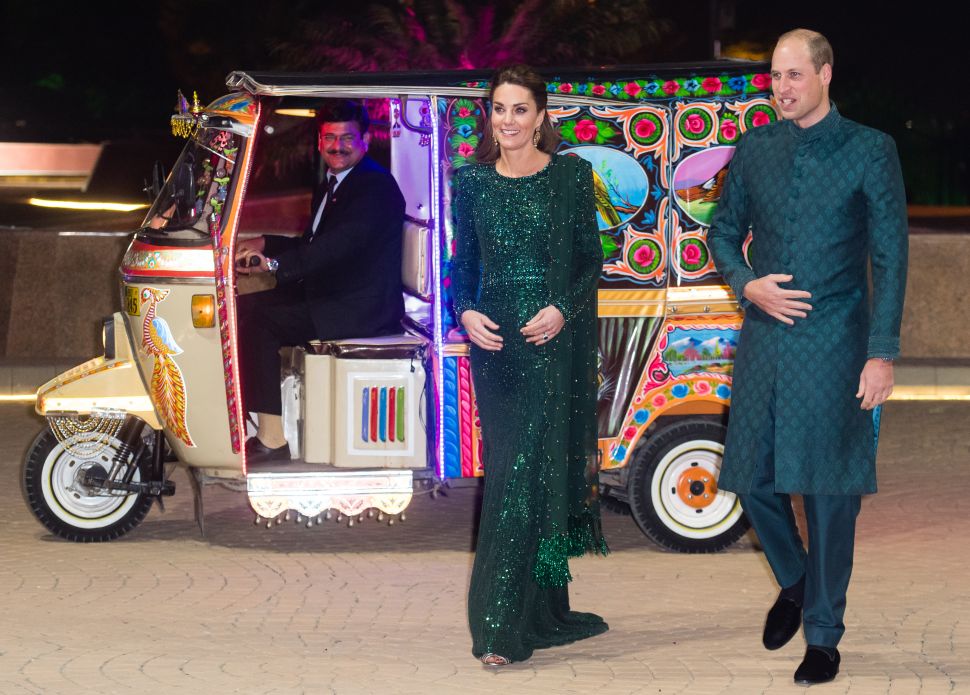